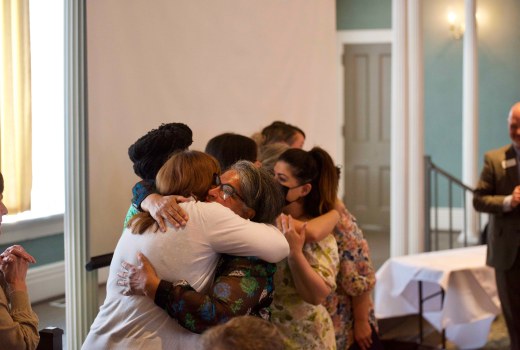 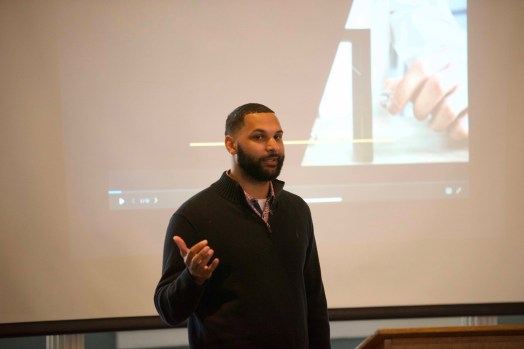 SALISBURY — Supporters of local nonprofit Prevent Child Abuse Rowan congregated on the second floor of the Rowan Museum Wednesday to recognize some of the people who helped it the most this past year.

The organization operates the Terrie Hess House, an accredited child advocacy center. The center advocates for victims, provides mental health intervention and other services at no cost. Executive Director Shawn Edman said child abuse is a problem in Rowan County and something people need to talk about it.

The gathering at the museum was an annual brunch program to announce the nonprofit’s awards.

Edman presented the awards with his staff at the front of the room. The presentations came with a lot of handshakes and a few hugs.

Volunteer of the Year was awarded to Adam Kenerly. Edman said the relationship with Kenerly started when he called the center and said he wanted to organize a benefit motorcycle ride fundraiser with no labor on the part of the organization.

Multidisciplinary Team Partner of the Year was awarded to Spencer Police Department Sergeant Mike File. File is currently serving as head of the department while the town searches for a new chief. Former Chief Mike James retired from policing for the second time in his career late last year to pursue a run for Davidson County sheriff.

Edman said meetings with members from local agencies monthly and said it was difficult to narrow the Multidisciplinary Team Partner award to one person. He said File is a fan of the organization’s therapy dog Murphy,

The President’s Award was given to Tammy McKinney. Edman said McKinney started bringing supplies to the organization and has continued to do so for the past year.

“We are so grateful because she brings things that we need that we can actually use to help our children,” Edman said.

Community Organization of the Year was awarded to New Sarum Brewing Company. The company is now hosting annual fundraisers to benefit the organization.

Vital-Sanchez’s family accepted the award for him and hugged all the staff.

“We need these hugs,” Edman said.

The event brought in former NFL player Gaelin Elmore to speak to the group this year. Elmore spoke about growing up spending more than a decade in the foster care system and experiencing abuse.

He told the crowd his parents were functioning addicts while he was growing up, but sometimes they chose their addictions over their children. When he was first taken away from his mother as a young child he made the decision to shut himself off from others and during his time his time in foster care he ran away several times.

The last time he ran away he said social services took the complaints of himself and one of his sisters seriously, investigated the abusive home he stayed in and revoked their foster privileges.

He moved back in with his dad and experienced some rough patches, including fighting, but in high school things improved and he developed a strong relationship with his father. His father was unexpectedly arrested when he was in high school and Elmore decided to drop out of school, but pointed to adults in his life for taking dramatic measures to prevent him from veering off track.

He said his football coach took him in. His father was released and the charges against him were dropped, but he refused to let Elmore live with him again to avoid hurting him again. He also credited his counselors for speaking to him every day, even when he did not want to talk, chipping away at the barriers he put up.