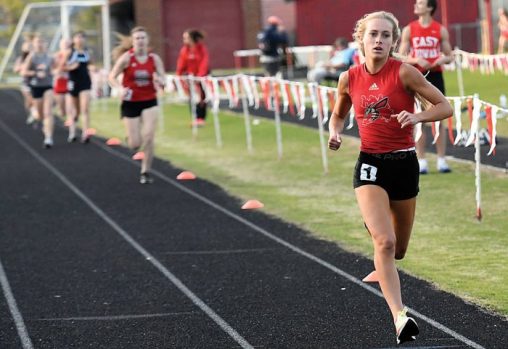 Sutton Webb of Salisbury pulls away from the pack in the 800 meter run. photo by Wayne Hinshaw, for the Salisbury Pos 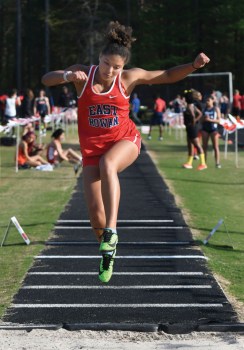 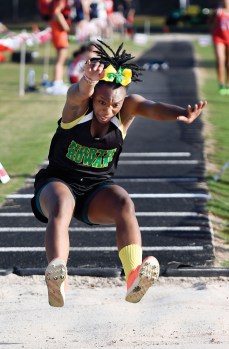 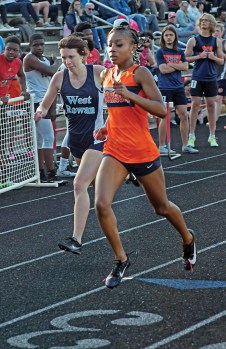 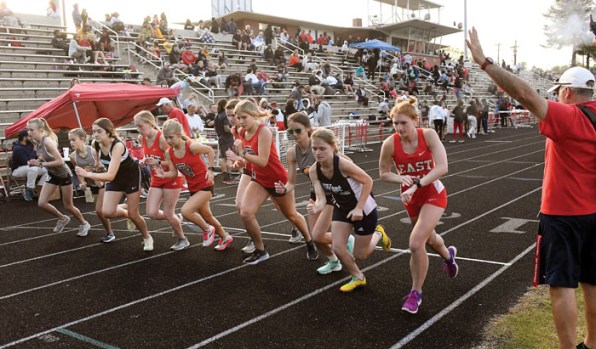 The start of the, 3200 meter run. with from right to left Meredith Bonner (East), Katie Roberts (West), Kendall Barbee (Carson)., photo by Wayne Hinshaw, for the Salisbury Post

It was the first county win for the Mustangs since 2015.

East scored 119 points to dethrone Carson which has ruled the county meet since 2017. The Cougars totaled 114.

East led the Cougars 109-108 going into the final event of the day — the 4×400. East’s 4×400 unit of Jasmyne Brown, Sadie Featherstone, Peyton Whicker and Meredith Bonner won to secure victory. East got 10 points for that win. Carson got six for third.

East only got four points for the two throwing events, but made up for it with 39 in the jumps.

A pivotal event was the pole vault, where East had the only entries. Jasmyne Brown won by clearing 6 feet, 6 inches, while Jadyn Featherstone got over the bar at 6 feet. In a 10-8-6-4-2-1 scoring system that meant 18 points, while none of the other teams scored.  That was a huge swing.

Iyanna Berry Lynch logged a second for East in the triple jump, Whicker was second in the 300 hurdles, and East had seconds in the 4×100 and 4×200.

White swept the sprints for the Cougars and added six more points with third place in the high jump. Zoe Holbrook won the long jump and placed high in the 100 hurdles and triple jump.

Macy Miller won the high jump for South, and Bethany Rymer placed high in all the distance events.