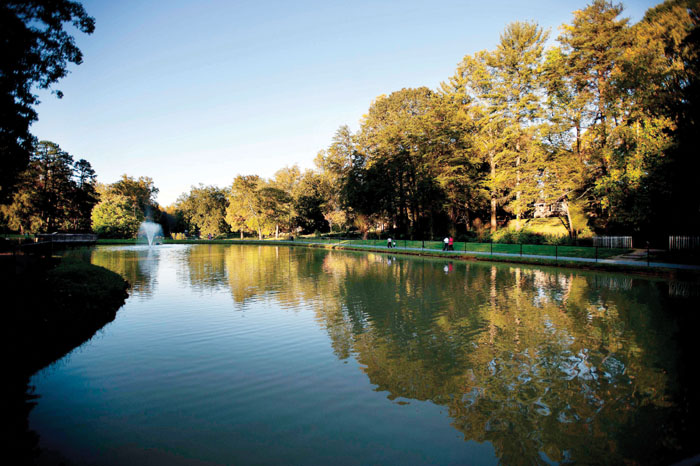 JON C. LAKEY / SALISBURY POST Granite Lake park offers a short and comfortable walking experience which is very popular. An asphalt loop around a lake with access to spur trails through a wooded lot with a shallow rocky stream. Sunday, October 11, 2015, in Granite Quarry, N.C.

GRANITE QUARRY — The Granite Quarry Board of Aldermen approved a 10-year plan for the town’s parks Monday after some discussion about its viability.

Implementing the entire list of recommendations would carry a cost of about $4.37 million, but the town is not bound to anything in the plan.

Alderman Doug Shelton questioned the price tag. During the meeting, he said the plan too ambitious for a town the size of Granite Quarry.

He said he supports improving the parks, making them compliant with the Americans with Disabilities Act and with appeal to all ages. He said he would support the plan if it was scaled back.

“The capital itself was too much,” Shelton said. “We shouldn’t be spending that kind of money for more land for more parks and stuff like that given the size of our town.”

Mayor Pro Tem John Linker said his perception of the plan is it would guide the board for years, open up grant possibilities and allow the town to pick and choose what it wants to do.

Alderman Jim Constantino asked what the advantages and disadvantages would be of adopting the plan. Mayor Brittany Barnhardt said the plan would give the town a vision and menu of options to choose from. She said she does not know of any disadvantages.

“I think there are maybe things suggested in there that we might not go that direction at all, it might ignite an idea to go a completely different direction, and that’s OK,” Barnhardt said.

Some of the aldermen were supportive of the plan because it will be an advantage when applying for grant money. Alderman Kim Cress said grantors will weed out applications from towns without an updated plan.

Spencer has adopted its own updated parks plan and approved submitting an application for a $500,000 grant to help pay for a new park downtown.

Constantino asked if future boards would be obligated to the $4.37 million outlined in the plan. Town Manager Larry Smith said the expectation is not to complete every project outlined in the plan and getting the planner to amend the document would require more work.

“The cost estimates are simply there for planning purposes,” Smith said, adding the estimates give the town an idea of what it is getting into when it goes to bid.

Barnhardt said the town needs to remember the growth coming to the area as well.

“It’s something we need to put in place,” Constantino said.

Among the recommendations in the plan are expanding Centennial Park, adding a splash pad and outdoor fitness facilities to parks as well as improving trail connectivity and adding amenities like sidewalks and bicycle lanes.

The plan also includes facility improvements like paved pathways that will erode less and repurposing some of the tennis court space at Granite Civic Park for pickleball.

Jon Wood, the Benesch planner behind the project, also recommended the town create a parks and recreation advisory board.

Ultimately the plan was adopted with the support of every board member except Shelton, who abstained.