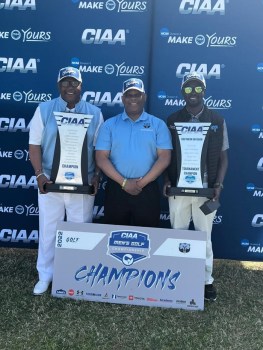 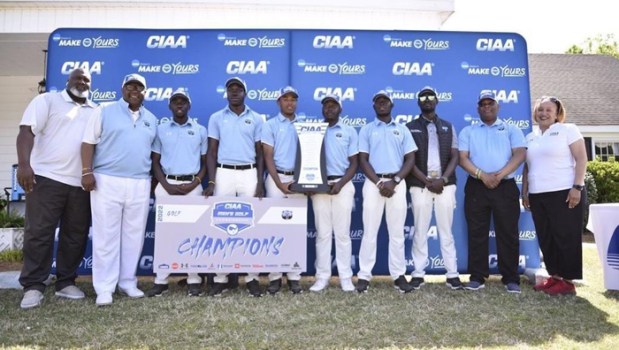 The Livingstone College Blue Bears golf team won the 2022 CIAA Golf Championship, as well as Coach of the Year, Player of the Year and the individual player award.

SALISBURY — Livingstone men’s golf is ranked 11th in the Division II Atlantic Region and is ranked No. 1 among Division II HBCU schools.

“We’ve never been ranked this high,” Livingstone coach Andre Springs said in a news release. “This is the best team I’ve ever had — pound for pound. All of them are good and they are real close. They compete against each other.”

The Blue Bears have dominated CIAA golf this spring and went undefeated in league matches.

Then the Blue Bears won the CIAA Golf Championship at Chicora Golf Club in Dunn.  The Blue Bears finished the two-round tournament with a team score of 582 (14-over) to capture their first title since 2018. Livingstone finished 19 shots better than Virginia Union and 27 ahead of Fayetteville State.

Joel Basalaine of Livingstone College finished atop the individual leaderboard at 1-under 141 to claim the medalist award.

Livingstone’s Ronald Otile joined Basalaine and Proctor on the All-CIAA team for the season.

Springs was named CIAA Coach of the Year.

Livingstone receives an automatic berth to represent the CIAA at the Atlantic Regional Tournment, which takes place May 5-7 at Ravenwood Golf Club in Victor, N.Y.

Top regional finishers will head to the Division II Golf Championship on May 16-20 at TPC Michigan in Dearborn.

“Our golf team’s performance shows that Livingstone College is marching forward on every side,” said Livingstone President Dr. Jimmy R. Jenkins, Sr. “We are a giant waking up and flexing our muscles.”