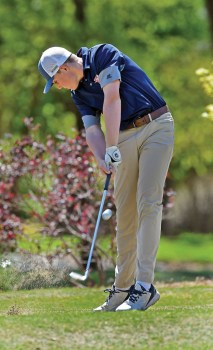 Landon Merrell of East Rowan tees off on No. 6 with an iron on his way to victory Tuesday. photo by Wayne Hinshaw, for the Salisbury Post 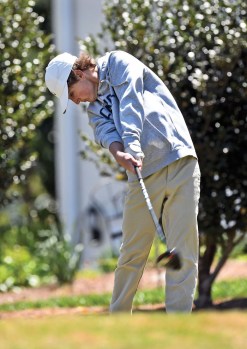 McGwire Owen from West Rowan teeing off., photo by Wayne Hinshaw, for the Salisbury Post 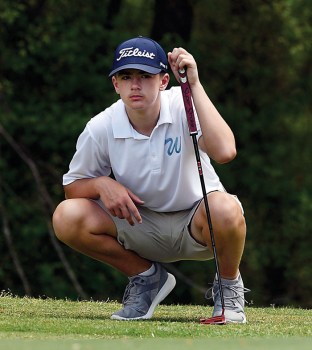 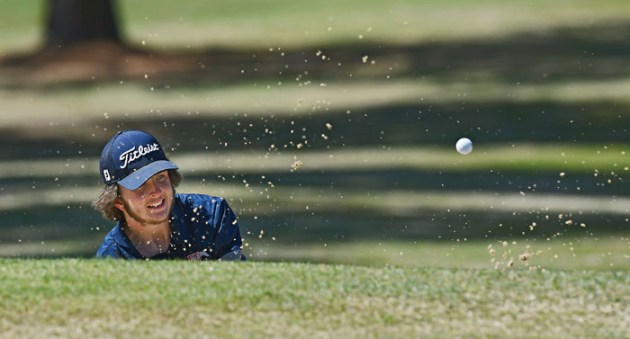 Dalton Heglar from East Rowan digging out of the sand trap. photo by Wayne Hinshaw, for the Salisbury P 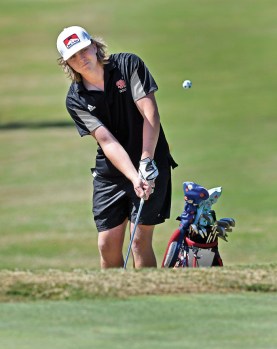 Cayden Moore from, South Rowan chip shot to the green. photo by Wayne Hinshaw, for the Salisbury Post

SALISBURY —The Country Club of Salisbury was the damp, windy scene of something old and something new on Tuesday.

The old was East Rowan sophomore Landon Merrell repeating as the top gun in the Rowan County Championships. Merrell shot a 4-over 75 that included two double bogeys, but his score was strong enough to win by two shots over West Rowan senior McGwire Owen.

Merrell made the fewest mistakes on a challenging course that was playing even more challenging than normal.

That’s what he does.

“It was tough out there today, especially when the wind kicked up,” Merrell said. “I played steady, at least steady enough. Lots of pars.”

What was new on Tuesday was a team championship for coach Ken Clarke and West Rowan in a sport that has been owned for decades by Salisbury and East.

West’s victory wasn’t a shock based on the Falcons’ impressive pre-tournament scores, but it’s similar in magnitude to the win that South Rowan posted in 2013 at Corbin Hills to break up years of domination by the Mustangs and Hornets.

“This was four years in the making,” said Owen, a slim guy with a smile as wide as the first fairway. “Justin Cole, Charlie Young and me are seniors who have been working toward this moment for a long time. We knew we had a chance to do this, and now the program has built a lot of depth. There’s not a lot of pressure to score on any one guy. You can go out and play conservative golf, and that’s huge.”

West shot 329, one of the higher winning scores to take the county in this century, but the Falcons still prevailed by 11 shots over runner-up Salisbury.

“I’m happy for our boys because they’ve battled all year in a very tough conference with Lake Norman Charter and Northwest Cabarrus,” Clarke said. “I think Salisbury has some injuries, so maybe we were fortunate today, but I’m not going to let that take anything at all away from our guys. We played very well today and we deserve to be champions.”

Merrell began his round on the No. 2 hole, playing with South’s Jackson Black and Salisbury’s Nick Antosek.

Merrell’s thing is consistency, so he was knocked back a bit by an early double bogey on the par-4 No. 5 hole, which is considered the toughest on the course.

But then he managed to put a long string of pars together, before he basically decided the tournament with two terrific shots on the daunting No. 13 hole, 550-plus yards, the longest of the course’s three par-5s.

Merrell is not a large guy, but he crushed his drive. It carried about 290 yards.

His second shot on the 13th was even better, his best of the day and one of the better ones of his life.

He was sitting on the long par-5 in two. Two putts later, he owned his first — and only — birdie of the day.

“That birdie gave me some momentum, and I also played really well on 14, 15 and 16,” Merrell said. “Birdie chances on all three, but I couldn’t make the putt.”

He had one more short lapse — a double bogey on 17 — but that birdie on 13 provided enough of a cushion to hold off Owen.

Owen shot 77 to lead the Falcons to the team crown.

Clarke has known Owen forever. Owen is the son of a notable local golfer Chris Owen, who teamed with Clarke to win the prestigious Labor Day Four-Ball Championship at the Country Club in 2012.

Owen is named after former baseball slugger Mark McGwire, but even growing up in a home filled with McGwire memorabilia, he made the choice of golf over baseball, and he’s been in love with the game for about a decade.

Under the circumstances, he was thrilled with it. It was one of the better scores posted on a rough day. He was a difference-maker.

“It was so windy early in the round, and even after the wind died down, it was still very wet out there,” Cole said. “You got no rolls today. The course played very long, I thought, but we all competed. This is a great team win. Really proud of all my teammates.”

Freshman Gage Ludwick was the final piece of the puzzle for the Falcons. Adding him this season put West over the top. He shot 81 on Tuesday.

“Getting to practice every day with my teammates, my game has come a long way,”Ludwick said. “Tough challenge today, lots of low spots and muddy spots on the course, but we made the shots we needed to make.”

Junior Tyler Kepley, who finished third in the 2021 Rowan County Championships at Crescent, was the fourth Falcon to make all-county and contribute to the team score. He shot 88.

“Individually, I didn’t have my best day, but this is a team game, and I knew my teammates had my back,” Kepley said. “That was a really challenging round. There were so many tough holes today, that I couldn’t pick any of them out as the most challenging.”

But, like his teammates, Kepley always fought his way out of the shadows and into the sunlight.

Young shot 94 for the Falcons, so he didn’t count in the scoring column, but the bearded, jovial senior did figure in the win.

“I’m the morale booster for our guys,” Young said. “As a senior, it’s nice to know that we won a championship on our farewell tour.”

NOTES: East Rowan (373), Carson (374) and South Rowan (395) followed in the team scoring. … Thirteen players shot 89 or better and were designated as all-county by the county’s coaches. Salisbury had five on that list, with Will Webb, Antosek, Warren Fesperman, Luke Graeber and Wade Robins. Webb and Antosek were top-five finishers in 2021. Robins made his season golf debut with an 89. … South’s Black, Carson’s Cade Cranfield and East’s Jaden Sprinkle joined Merrell and the top four Falcons on the all-county team. … The experience of playing at the Country Club of Salisbury will be beneficial to many golfers, as both the South Piedmont Conference Tournament and the 3A Midwest Regional will be held there. West will host the SPC event. Merrell considers Warrior his home course and credited swing coach Brian Lee with helping his game as much as anyone. … West won one of the nine-hole SPC matches this season, as did Northwest Cabarrus. Lake Norman Charter, a perennial state champ in 2A before moving up to 3A this season, hadn’t lost a conference match in a half-dozen years. … It was the first county championship in many years that didn’t include Rhett Teems, who retired after many seasons of coaching the Mustangs.