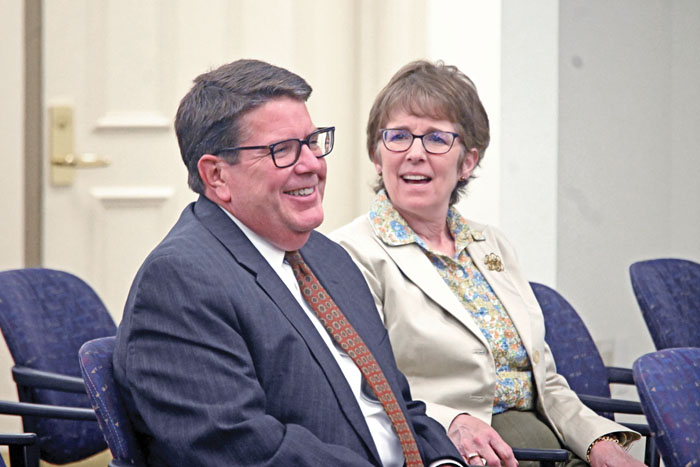 Greene, a native of Lenoir, has more than 30 years of public service experience, with his most recent position being Raleigh’s assistant city manager for economic development since 2014. In that role, he was tasked with overseeing the city’s planning and development departments, the convention and performing arts centers, environmental sustainability, utilities and engineering services. He also worked with the Raleigh City Council, city departments and community stakeholders on addressing resident and business concerns, managing growth and improving services. Other tasks include managing the city’s strategic plan and promoting service equity and inclusion.

Greene told council members Tuesday he was very grateful for their support, confidence and trust in him to lead the city and carry out the council’s vision to be “a city for all.”

“Throughout the process, I enjoyed the conversations that I had with council and hearing about your vision, about continuing to develop Salisbury as a successful city and as a city that provides an opportunity for all and welcomes all,” Greene said. “That was not only important for me, it was important for my wife, Laura, as well.”

Former City Manager Lane Bailey retired from the city in December, with former Concord City Manager Brian Hiatt hired in November to serve in the interim. Chicago-based consulting firm Baker Tilly was hired in October to assist the city in recruiting candidates for the next manager.

Baker Tilly narrowed a pool of 62 applicants to 11 potential candidates and then five, who Mayor Karen Alexander noted were “diverse in every way.” She credited the process with being a thorough one and said the finalists included two women, one Black man and two white men. Council members then met in two closed sessions on March 24 and March 28 that spanned more than nine hours to interview finalists for the job. Ultimately, council was tasked with making the final decision between two candidates.

Alexander said Greene embodied the qualities and values prioritized among all council members and was the “stand-out candidate.”

“We are excited for him to work with council and with our excellent staff to implement a very robust strategic plan and vision for Salisbury’s bright future,” Alexander said. “And also the challenges of responsible growth, managing public safety and providing an environment that creates opportunity for all, inside and outside the walls of City Hall.”

Greene spent a 15-year stint with Concord beginning in 1999 as assistant manager for operations, where he helped supervise the operations of police, fire, parks and recreation, communications, development plans review, public housing, technology and the airport. He was promoted to deputy city manager in 2003 and began direct supervision over 300 employees, 11 service areas and budgets totaling more than $130 million.

“From my time in Concord, Salisbury has always had a reputation as a very progressive city, as a city that provides high quality services,” Greene said. “I remember in my days in Concord, we would come up and visit with the staff here and learn about customer service and learn about other programs and services.”

Council member David Post commended council member Anthony Smith for calling on the decision to be an unanimous one.

Smith also thanked Greene for his commitment to diversity, equity and inclusion and noted Greene’s comments that it is “more than checking a box” or “a symbolic action.” Greene said he’s already been in communications with Anne Little, the city’s Diversity, Equity and Inclusion director, as such principles must be embedded into the culture throughout the organization to ensure equitable outcomes across the city.

“Now it is trendy to talk about equity,” Smith said. “But it’s good that we have a leader that has actually embodied that at the city level, at the municipal level.”

Council member Harry McLaughlin echoed the same and commended Greene’s willingness to be actively involved throughout various communities and put those focuses on equity and inclusion “in motion.”

Post added that he was particularly struck by the fact that Salisbury was the only city on Greene’s radar and the only position in which he’s applied over the last eight years despite having an “overwhelming” resumé.

“It really had an impact on me,” Post said.

Greene said Raleigh is special but he wanted to be in Salisbury, especially after watching the council retreat and hearing more about the council’s vision.

Mayor Pro Tem Tamara Sheffield joked that it would soon be “Greene’s Dream Team,” as the city manager is tasked with leading more than 400 full- and part-time employees. The city manager also works directly with the City Council to carry out its vision, while also directly supervising development throughout the city and the presentation of the annual operating budget.

Greene has also held management and budget positions with the city of Rock Hill in South Carolina, Las Vegas, Nevada, and the Government Finance Officers Association in Chicago. He received a bachelor’s and master’s degree from UNC-Chapel Hill and is a graduate of the University of Virginia’s Senior Executive Institute and International City/County Manager’s Association (ICMA) Gettysburg Leadership Institute.

Greene will begin overseeing city operations on Monday, May 23. His annual salary will be $210,000. He and his wife, Laura, have a daughter who’s a high school senior and is finishing the school year.

During the meeting, council members also approved an extension to the existing employee agreement with Hiatt until June 30, which will allow him to serve in an advisory capacity. He is currently working to piece together the 2022-23 fiscal year budget using council feedback from the two-day planning retreat in January. The budget goes into effect July 1, so a recommended budget must be presented to council members no later than June 1.

Council members also thanked Hiatt for his willingness to serve in the interim position and keep things afloat, which Hiatt said is made easier with a great staff.

Greene also had positive things to say about city staff. He said “these are challenging times for local governments” throughout the nation in regards to the pandemic, new technology and evolving service expectations and demands.

“I just spent an hour with the leadership team of this city and I have no doubt in my mind that working together with the city staff and City Council and the community, we can meet these challenges and continue to grow Salisbury into a community for all,” Greene said.

• The council held a closed session following the regular meeting to discuss the acquisition of property as allowed by North Carolina General Statute 143-318.11(a)(5). No action was taken.

• Council members approved a right-of-way use permit for the use of two parking spaces adjacent to 127 South Main St. on Mondays and Tuesdays and adjacent to 133 South Main St. on Wednesdays and Thursdays for ongoing construction. The request comes from Alfred C. Wilson & Co. to use those spaces to park the work trucks of subcontractors during the work day from Wednesday until July 19.