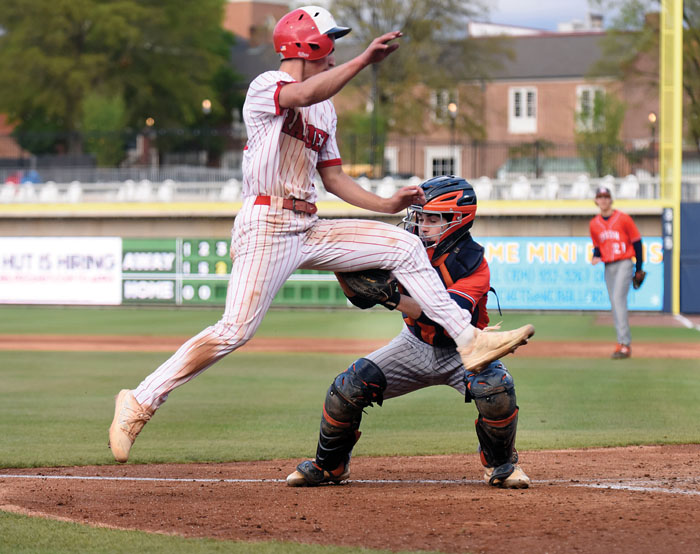 South's, Ty Hubbard 9 tagged out at the plate by Cameron Burleyson 2. photo by Wayne Hinshaw, for the Salisbury Post

It was only the second time in program history that Carson has won an Easter tournament anywhere. In 2010, the Cougars beat a dynamic Davie County team at Salisbury High’s Robertson Stadium to take the Cliff Peeler Classic.

For several seasons, the Kannapolis Easter tournament was played with a Cabarrus vs. Rowan round robin. Carson went 3-0 vs. the Cabarrus schools in 2013, but that didn’t provide the same satisfaction as winning a championship.

“As far as Easter championships, we definitely ended a drought,” Cauble said. “We had a pitching plan for this tournament, and it held up. We know we’re not going to be able to win our conference, not with South Rowan and East Rowan only having one loss apiece, so we had a mindset of winning this tournament. It was important to us. We wanted to show we could win three straight games against good teams. Now we know we’re capable of doing that in our conference tournament and in the state playoffs.”

South (14-4) is focused on winning the SPC and takes on Carson in league games tonight and Friday. South didn’t use its No. 1 or No. 2 pitchers — that’s Wake commit Haiden Leffew and Carson Crainshaw — in the tournament.

Carson used its No. 2 guy Mikey Beasley to start on Saturday, but didn’t use ace Hayden Simmerson at all.

“Neither South nor us were using our 1 or 2 guys tonight, but South’s still got their top guys hitting and that’s a very potent lineup they’ve got,” Cauble said. “We built a good lead, but I never felt secure until the last out. South fought right down to the end.”

Carson scored a run in the top of the first against South starter Colton Fisher (0-1), who is normally the third baseman.

“Casey went to a full count on just about everyone, needed 37 pitches to get through the first inning, and that’s normally enough pitches for two innings,” Cauble said. “Casey got himself in a hole, but he pulled himself out of it. He gave us what we needed.”

After Crawford managed to put a zero on the scoreboard in the bottom of the first, Carson took control of the game with a five-run top of the second that knocked out Fisher. After that, South sent infielders Nathan Chrismon and Ty Hubbard to the mound. Logan Ballard pitched the seventh.

“We got it going early on offense and we continued from there,” Cauble said.

The Cougars led by as much as 8-0. Crawford, who has been used primarily in a closer role this season, gave Cauble four innings. He struck out four, walked two and allowed four hits. The Cougars were in command 8-1 when he exited.

Emory Taylor handled the fifth and sixth innings on the mound, as Carson went up 9-2. Austin Efird faced eight batters and gave up two runs in the bottom of the seventh on three hits and two walks, but he got the last three outs.

The hitting star for the Cougars (13-6) was the No. 9 man in the lineup — center fielder Keegan Barger. He went 3-for-4, scored twice and knocked in a run.

“He’s progressing,” Cauble said. “He’s making plays on defense, and he’s started to believe in himself and in what he’s capable of doing at the plate.”

Jacob Ritchie, normally South’s catcher, started at third base, but continued to swing a hot bat. He drove in two runs.

Chrismon had two hits, including a triple. He scored one and drove in one.

“It’s a win against a really good team and we also were able to win a great game in the semifinals against a Northwest Cabarrus team with outstanding pitching,” Cauble said. “We were pretty raw when this season started, but we’re showing growth.”

The neighbors will be back at it tonight (at Carson) and again on Friday (at South Rowan), and they’ll put their horses on the mound.

Meanwhile, East Rowan and West Rowan will tangle in Granite Quarry tonight and in Mount Ulla on Friday. East has a powerful team, but West’s pitchers, especially lefty Casey Gouge, can be tough on anybody.

The SPC is certain to have five playoff teams (the four Rowan schools, plus Northwest Cabarrus). Central Cabarrus has a good chance to make it, as well.

But Cauble isn’t going to assume anything, not even with the Cougars currently sitting 14th in the NCHSAA RPI rankings in the 3A West.

There will be 32 teams in the bracket.

NOTES: South has been a frequent Easter tourney winner under coach Thad Chrismon, who guided South to Easter championships in 2008 in the Cliff Peeler and in 2014 and 2016 in Kannapolis. South also went 3-0 in 2012 and 2013 when the Kannapolis tournament used a round robin Rowan vs. Cabarrus format. … In the NCHSAA RPI rankings, East Rowan is still No. 1 in 3A West, while South Rowan is fourth, and West Rowan is 11th. Northwest Cabarrus is 15th. Central Cabarrus is 29th.