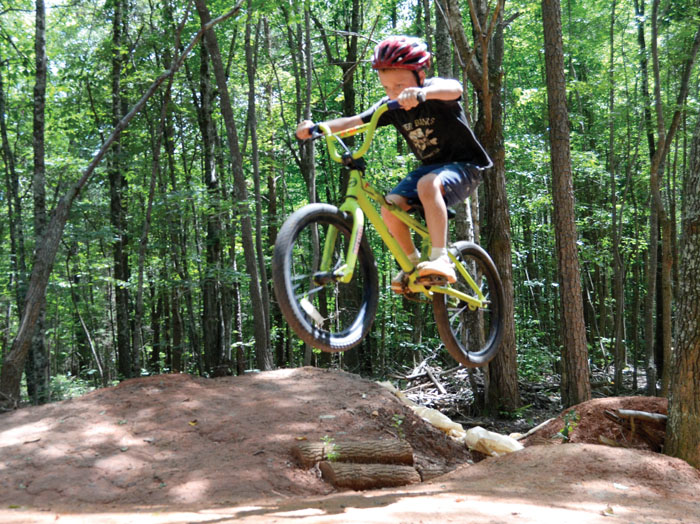 A biker takes off from a mound at the jump park in Community Park. Shavonne Potts/Salisbury Post File Photo

SALISBURY — A local nonprofit is adding the mountain bike trails at Community Park to its programs.

The Pedal Factory, a Salisbury nonprofit that distributes bikes, provides education and repair facilities for cyclists, has taken on the trail maintenance effort at the park to put more support behind the efforts.

Pedal Factory Executive Director Mary Rosser said the new partnership will allow the nonprofit to get grant funding for the trails and organize maintenance. She pointed to the state’s Recreational Trails Program grants as an example of money up for grabs.

She said the organization will carry insurance for volunteers working on the trails. Before now, the trail building and maintenance effort at the park was informal and Rosser said the new program should streamline the process as well as give people a way to report any issues that arise.

Rosser said the nonprofit members were discussing was of getting involved with a mountain biking group before the COVID-19 pandemic and ahead of the N.C. Interscholastic Cycling League race scheduled at the park in 2020. The race was canceled due to the pandemic, but it went on this year on April 5.

“They’re great trails, and when trails were closed for COVID our trails were open,” Rosser said.

She said the trails drain so well they resist bad weather and they stay in good shape partly because they are not ridden heavily.

“Which is great, but you also do want people to know about it,” Rosser said. “They’re really good trails.”

Rosser credited a small group of volunteers for their hard work.

“They came to one of our board meetings and just say, ‘Hey, in order for us to continue to do trail work and seek more funding, we really need to have a nonprofit entity,’ ” Rosser said.

Andrew Pitner said he got involved a few years ago because he enjoys riding.

He said a Boy Scout built a bridge connection over a creek in the park a few years ago and that allowed the volunteers to build more than 2 miles of additional trails and add some loops.

As time went on, Pitner said it became clear the trail building needed to align with a nonprofit because the city does not have the resources to build out the trails.

Pitner said he wants to see more trails elsewhere in the community as well, though nowhere offers the same amount of space as Community Park.

Rosser said the focus ahead of the race on April 5 was getting volunteers recruited so the trails were ready for the event, but going forward the organization wants to recruit more volunteers and use its voice to share the park.