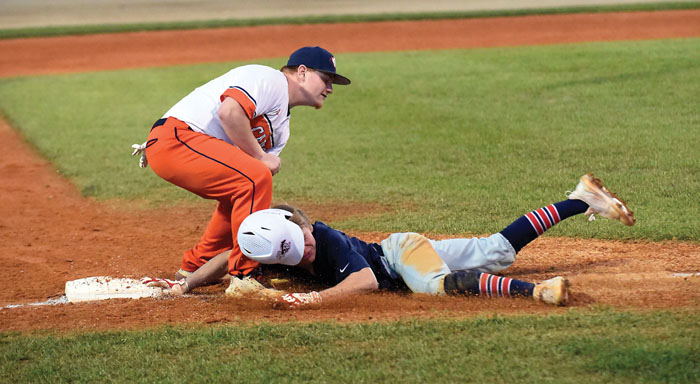 Carson's Samuel Safrit picks off an East Rowan runner at third base. File photo, by Wayne Hinshaw, for the Salisbury Post

CHINA GROVE — Sam Safrit had gotten to the plate only 12 times for Carson’s varsity baseball team prior to his senior season, so he wasn’t counting on the opportunity to continue his baseball career.

But now he has a chance to keep playing baseball while he extends his education. After graduation, he’ll head to the mountains and Montreat College.

The versatile Safrit had quite a week last week, with a clutch pinch-hit, a diving catch and a pitching save in Carson’s two games with West Rowan, and he hopes to build on that success as his first full varsity season heats up.

“Montreat saw me play and saw me in camp, and I got an email from the coaching staff asking me if I was ready to join the Montreat Cavaliers family,” Safrit said. “They offered me a scholarship. I was really surprised. I wasn’t expecting it, but I wanted to play college ball, and now I am.”

Safrit was homeschooled as a freshman and played for the Greater Cabarrus Stallions.

He arrived at Carson for his sophomore year and was scheduled to split time between the jayvee and varsity teams, but that was the COVID season, in which everyone was shut down in mid-March after playing a handful of games.

In the mini-season of 2021 that was delayed by COVID, teams plunged into conference play right away, and coaches didn’t have much of a chance to audition the new faces. That was Safrit’s junior year. He was on the varsity, but he only had those dozen plate appearances. He made the most of them with four hits, four RBIs and three walks. He came through in the clutch a few times.

“He got a good bat,” Carson head coach Chris Cauble said. “He’s got some power, some pop.”

As a senior, Safrit’s role increased quite a bit, but he didn’t get off to a good start.

“He went through a spell where he didn’t hit well, and when that happens you don’t play as much as you want to,” Cauble said. “But to his credit, he didn’t pout. He stayed with it, and worked his way through it.”

Safrit figures he came out of the slump on March 25 at Northwest Cabarrus. The Trojans have very good pitching, some high 80s guys, but Safrit rapped two doubles.

“My timing had gotten off, and I was lunging at the plate,” Safrit said. “But we worked to get it fixed, and that’s the night I came out of the slump.”

Safrit drove in a run in the 7-4 win against Southwest Guilford — that was the day Cauble got his 400th varsity coaching win in Rowan County.

When Carson played West Rowan on Tuesday, Cauble went with his best defensive lineup. Safrit didn’t start that one, but he got a chance to pinch hit with the bases loaded against West’s outstanding lefty Casey Gouge and singled in a run.

“Coach had three of us swinging bats as possible pinch-hitters when we started getting some people on base,” Safrit said. “In the back of my mind, I thought it was probably going to be me that went up there. I did what I could. I helped my team with a base hit against one of the county’s best pitchers.”

Carson still lost that game 3-2, but beat the Falcons 8-5 on Wednesday.

Playing first base, Safrit made a diving, sprawling snag of a Noah Loeblein line drive that saved two runs. Cauble credited him with making a pick that saved another run.  Then, when West made a late charge in the bottom of the seventh, normal closer Casey Crawford, who had pitched on Tuesday, wasn’t available, so it was Safrit who got a strikeout for the save with the tying run at the plate.

“The biggest thing I did was the diving play,” Safrit said. “I’m not sure how I caught it, but that got everyone fired up. We went and got some runs.”

Safrit played left field frequently when he was younger, but he’s bulked up some to 5-foot-10, 200 pounds, and the Cougars use him now at first or third base. He’s also been a valuable contributor on the mound – five innings, no runs, no walks, eight strikeouts.

“He had a big hand in the win we had against West,” Cauble said. “He’s got a big role in what we do.”

Safrit’s batting average still isn’t as high as he wants it be, but it’s trending in the right direction. He went 1-for-2 on Friday as the Cougars (11-6) rolled against A.L. Brown in the Easter tournament in Kannapolis.

Rhodes slides past Hocevar on Bristol dirt to win…