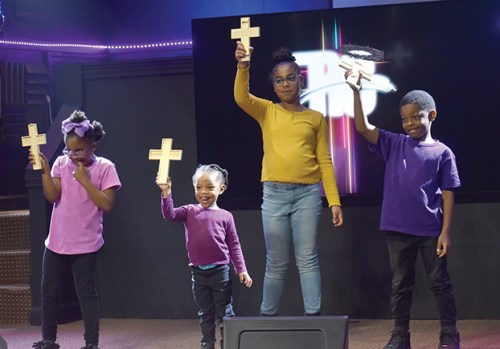 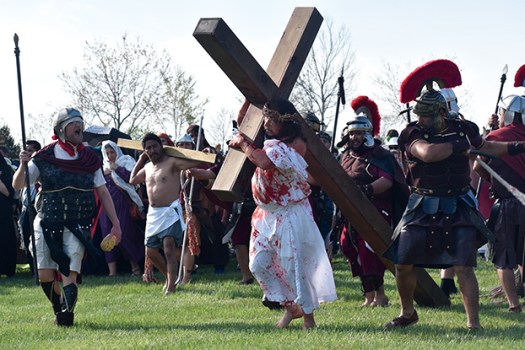 The actor playing Jesus carries the cross while being reprimanded by soldiers. A large crowd followed the Living Stations of the Cross as it moved from scene to scene. Ben Stansell/Salisbury Post 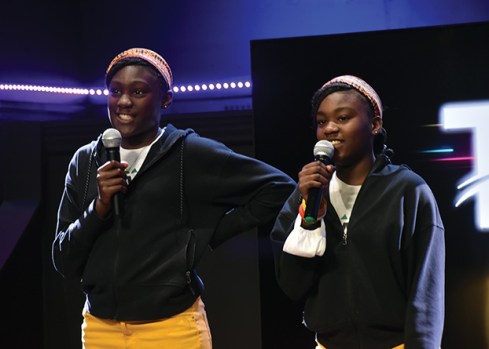 Jahneria and Jahnara Hurd participated in The Reach's Resurrection Celebration Production this year, taking the stage to perform in front of an in-person audience. Ben Stansell/Salisbury Post 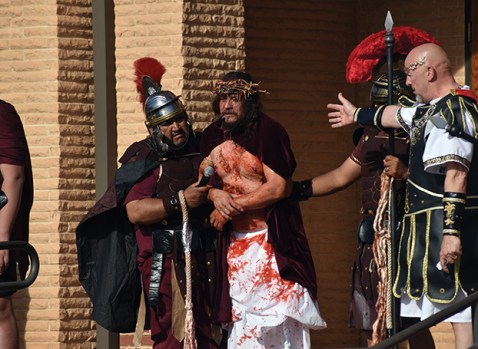 Sacred Heart Catholic Church hosted its Living Stations of the Cross on Friday afternoon. Like many churches, Sacred Heart was able to host most of its traditional liturgies this year. Ben Stansell/Salisbury Post

SALISBURY — When COVID-19 surfaced as a serious threat in the United States in early 2020, a few members of the Mt. Zion Baptist Church congregation approached the uncertain situation with optimism.

“I remember some of our church leaders were saying we’d be back by Easter,” Pastor Nilous Avery said.

Avery didn’t think that would be the case, but he harbored a hope of his own.

“I recall telling them, ‘We’ll celebrate Easter later this summer,’” Avery said. “We felt the pandemic or whatever it is would phase out and ease up and in the summertime we’d invite people to come back for an Easter celebration.”

Needless to say, that didn’t happen either.

Avery spent that Easter Sunday and the entire next year delivering sermons to a camera while standing in a mostly empty sanctuary. When Easter 2021 came around, the church stationed chairs outside and hosted an open air service that was far from normal.

Today, members of the congregation will return to the Mt. Zion Baptist Church sanctuary for the first time since Easter 2019. There will be masks and other health protocols in place, and Avery said he’s not sure if attendance will be back to pre-pandemic level. But that doesn’t dampen his excitement.

“It’s been two years since we’ve had anyone in the church for Easter Sunday and we’re certainly excited about that,” Avery said.

Like Mt. Zion, many local churches have welcomed back larger crowds and familiar traditions during Holy Week to celebrate the resurrection of Jesus. Easter is seen as a time of renewal and church leaders are embracing that message with extra emphasis this year.

“It worked, but it was so Zoomy and complicated”

Rev. Lara Musser Gritter, co-senior pastor of First Presbyterian Church, doesn’t have fond memories of scrambling in the spring of 2020 to figure out how to commemorate Easter virtually.

“Oh my goodness, I shudder when I think of the first year,” Musser Gritter said. “We were working so hard to make the best of it.”

On Maundy Thursday — a day commemorating the Last Supper and Jesus washing the feet of his disciples — First Presbyterian Church typically hosts a nighttime Service of Shadows.

“We will read the scripture, the story of Jesus’ trial and crucifixion,” Musser Gritter said. “We choose five readings and after each reading we extinguish a candle and turn off a set of lights in our sanctuary. By the time Jesus actually dies in the story, all of the lights turn off and we have one final light. The preacher goes and grabs that and processes it out.”

The procession from the church is accented by an acapella rendition of “Were You There (When They Crucified My Lord).”

In 2020, there was no procession. Musser Gritter, her husband and co-senior pastor Josh Musser Gritter, and other clergy members teamed up to adapt the service for streaming.

“We recorded a Zoom call for the Service of Shadows by turning off lights in our back living room,” Musser Gritter said. “It worked, but it was so Zoomy and complicated.”

At that time, concern about COVID was so high that many people weren’t even comfortable gathering outdoors. Instead of having people for the tradition of flowering the cross on Easter Sunday, Musser Gritter “dumpster dived” for flowers discarded from Chestnut Hill Cemetery and put them on the cross herself. It was a bright spot in an otherwise challenging Easter season.

Amidst the uncertainty of COVID, Sacred Heart Catholic Church also pivoted to a virtual format for Easter 2020 and made its services available via livestream. For its Thursday night Mass of the Last Supper — the inaugural service for the three days known as the Easter Triduum — the church showed the service online and placed an altar outside for people to park their cars around.

“It was almost like a drive-in theater sort of a thing where people stayed in their cars, but could still be present,” Fr. John Eckert said.

The pandemic forced The Reach, a non-denominational church located at 722 W. Horah St., to cancel its annual Resurrection Celebration Production. Linda Hunt, who serves as ministerial arts director for the church, writes and directs the performance. Held on Good Friday, the production is a combination of theater, dance, song and scripture that puts a unique spin on the story of Jesus’ crucifixion and resurrection.

“That year, we didn’t do anything,” Hunt said.

Pews and church seats mostly sat empty for Sunday morning services as many churches showed their services online only.

“We livestreamed things on Friday and Holy Saturday, but really didn’t have many people present,” Eckert said. “That Easter Sunday, it was just different — a lot of live streaming.”

Last year, with COVID-19 still a threat but vaccine rollout underway, churches began to explore ways to bring elements of Easter back. Many settled on a blend of in-person and virtual, offering live streamed services for those not comfortable with returning.

“I’m so proud of the way pastors and churches did everything they could to make the best of a horrible situation the last two years,” Musser Gritter said.

For Sacred Heart, COVID-19 protocols still in place last year necessitated small adjustments not just during Holy Week — the week leading up to Easter Sunday — but throughout Lent, which is the 46 days before Easter.

On Ash Wednesday, the first day of Lent, clergy members employed the “ancient” practice of sprinkling ashes over the heads of church members instead of using their thumbs to form an ash cross on their foreheads.

“The same principles apply, but instead of having the visible cross it’s ashes on top of your head,” Eckert said.

The church held in-person Easter liturgies, bringing back as many people as possible, but also livestreamed the event for folks who weren’t ready to come back. As it had been doing since the start of the pandemic, the church utilized outdoor space as much as possible.

The Reach brought back its annual Resurrection Celebration Production, but not all of the crowd. Actors, singers and dancers performed in front of a small audience while most church members watched through social media from their individual homes.

Hunt was happy to be able to host the production again, but missed having a full house. The typically energetic and responsive audience was much more subdued.

“It was different because you didn’t have that instant feedback,” Hunt said.

There was plenty of audience feedback in The Reach’s sanctuary on Friday evening when the church opened fully for its Resurrection Celebration Production. Members of the congregation clapped and said words of encouragement throughout the performance.

For the first time since 2019, the production felt the way it should.

“There’s nothing like that kind of energy in the room,” Hunt said. “It takes it to another level.”

The performance was recorded for people who could not attend or who are not yet feeling safe. For The Reach and other churches, showing services online as well as holding them in-person is the new way of operating at all times.

For the first time in two years, Ebenezer Lutheran Church in China Grove has brought back its Easter pageant. The church has held the pageant since the 1950s. Church members act out well-practiced and familiar scenes like the Last Supper, Judas’ betrayal, Christ’s crucifixion and his resurrection — all on a simple but well-adorned set in the open air.

The first performance was held on Saturday night and the second will be held tonight at 8:30. Ebenezer Lutheran Church is located at 4914 Old Beatty Ford Road.

Since the pageant is outdoors, people can space out in lawn chairs and on blankets. There is no charge, but the church will be selling popcorn and snacks during the performance.

Lucas Safrit, the church’s Synodically Approved Minister, views the performance as a “first step” in the church renewing its outreach into the community after two years of struggling with ministry under COVID-19 conditions.

“I think this pageant is a good symbol of a way we can start to reemerge and do the Lord’s work in our community,” Safrit said.

Sacred Heart has hosted its traditional liturgies leading up to Easter Sunday. Hundreds of people came out to attend the Living Stations of the Cross on Friday afternoon, a live reenactment of Jesus’ crucifixion. Eckert said church members have approached this year’s liturgies with a newfound feeling of thankfulness.

“We’ve still celebrated Easter the last two years, it’s not like it was canceled, but I think the beautiful thing is just appreciating the ability to sit next to somebody, to talk to somebody, to see their face,” Eckert said. “Those are things that in Easter 2019 wouldn’t have seemed like a big deal where now it’s an appreciated part of day-to-day reality.”

First Presbyterian, whose attendance has been “swelling” the last few months, hosted Maundy Thursday like normal this year, without any Zoom calls or living room lights. Musser Gritter said she was especially excited to have a normal communion during the service.

For her, the service was symbolic in more ways than one.

“For a lot of people, I think we’ve felt like the last two years have been one long Lent, where we’ve been sad and struggling and tried,” Musser Gritter said. “This, I think, being able to do a full Maundy Thursday, validates the grief we’ve experienced over the last two years. To have the full Easter is going to feel like a reminder of Christ’s resurrection that God has the last word. That death and disease don’t define human history nearly as much as the love of God and God’s determination not to be God without us.”

“One of the things about Easter is we celebrate the resurrection, new things and new beginnings,” Avery said. “For a lot of people, it will be the resurrection of seeing people, some of them they haven’t seen in a long time.”

Avery said being in-person will bring energy, excitement and “hope for what the future might hold for us.”