Grounds crew members from the Kannapolis Cannon Ballers work at the Southeast Middle School baseball field. Tim Siegel, right, moves dirt along with Charles Palian, center, and Ryan Pegarsch. The workers added dirt to low areas of the infield as part of improvements. photo by Wayne Hinshaw, for the Salisbury Post 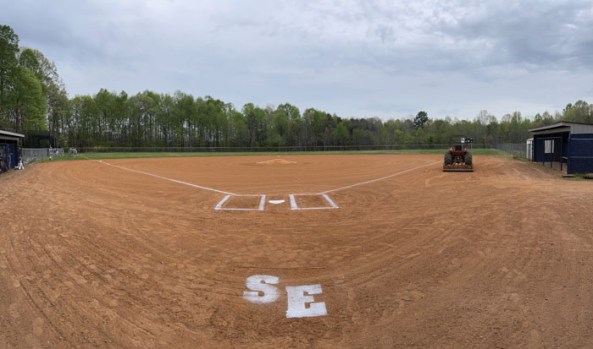 Submitted photo — The completed Southeast Middle School baseball field — complete with 'SE' painted on the dirt — is seen before a game this past week.

Southeast Middle School baseball field with the ground crew from the Kannapolis Cannonballers with Charles Palian nearest camera. The are adding dirt to the infield in an area that was low. photo by Wayne Hinshaw, for the Salisbury Post 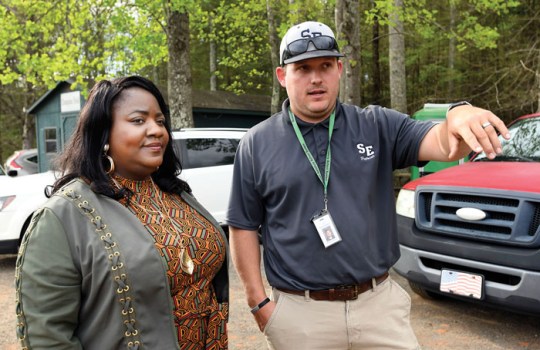 Southeast Middle School baseball field. Baseball Coach Phillip Hilliard explaining to Principal Davian Ellison what they are doing to the field. photo by Wayne Hinshaw, for the Salisbury Post 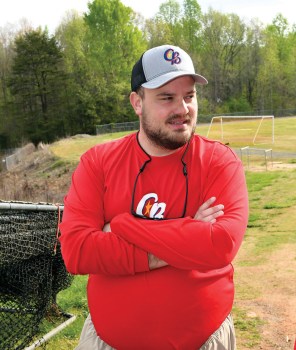 Ryan Pegarsch talks about work at Southeast Middle School's baseball field where the grounds crew from the Kannapolis Cannon Ballers helped out. photo by Wayne Hinshaw, for the Salisbury Post

SALISBURY — It’s 10 a.m. on a Tuesday, normally a planning period for Southeast Middle School math teacher Phillip Hilliard, but this is a day he’s had circled on the calendar for months.

Hilliard is also Southeast’s baseball coach, and in the sports complex situated in a valley below the school, three professionally manned vehicles are hard at work on a Patriots’ baseball  field that appears to have been carved and chopped out of a pasture.

Experts handling the vehicles — trained Kannapolis Cannon Ballers personnel, including head groundskeeper Tim Siegel — are sweating, dragging, grooming, leveling, filling holes and reconstructing a battered field that has been rudely treated by the deadly combination of time and weather.

Every thunderstorm has put Southeast’s ball field out of commission for an extended period. Prior to Tuesday, the Patriots had been able to play only one home game this season.

“Whenever it rains, we’ve been shut down for several days because with the drainage situation we’ve had, the outfield just wasn’t safe,” Hilliard said. “But things are looking up for us.”

Hilliard learned baseball from his father, Craig, long ago.

A lefty, he hurled and hit so well for Scott Maddox-coached Salisbury Hornets teams that he received the Mark Norris Memorial Award as Rowan County Player of the Year in 2005. A strapping fellow, he also played on the offensive line for the football Hornets and he punted for the Wingate Bulldogs during his college days.

After college, Hilliard served as sports director at the Hurley YMCA for years before moving over to education. A sports management major at Wingate, he now holds a masters degree in special education.

Teaching exceptional children (EC) students in the full range of subjects proved to be rewarding work, and he also took the reins of the Knox Middle School baseball team.

Prior to this school year, when he was offered the chance to teach just one subject at Southeast — math — and to coach the school’s baseball team, he accepted a new opportunity.

“I really enjoyed special education, got to work with really great kids, but the advantage I have now is a lot less paperwork,” Hilliard said. “Paperwork was taking all of my time.”

Southeast is a unique school for Rowan County, with students heading in all sorts of directions when they move on to high school. Southeast sends sizable numbers of its graduates to Carson, East Rowan, West Rowan and Salisbury.

“When we played Erwin, by the time we’d thrown four pitches, they’d hit two over the fence,” said Hilliard, managing a small smile.

Rebuilding Southeast’s baseball field, boosting the players’ pride in their venue and their surroundings is a major part of what Hilliard hopes will be a transformation for Southeast baseball.

Hilliard has personally spent hundreds of hours on the field, seriously upgrading the dugouts and the right-field scoreboard, among other things.

“We’ve made it a point to bring back the national anthem to our games,” he said. “We want the middle school baseball experience to prepare our kids for that they’re going to be seeing in high school. We’ve tried to improve a lot of little things because that leads to the big things. The more you show you care about them, the more effort you get, the harder they want to work.”

The renovated field should become a rallying point for not only the baseball team, but for parents and for the surrounding neighborhoods.

Hilliard got some advice from Maddox about getting donations, and there’s been a flurry of assistance from the community, with donations of materials, money, time and resources.

Thousands of dollars, massive bags of mulch, tons of sand, piles of brick and lots of well wishes have been accumulated to move forward with the project.

The crowning touch in the field revival was getting the Cannon Ballers on board.

Hilliard credited Cannon Ballers season ticket holder Edgar Simmons with suggesting that he call on the Cannon Ballers for the field assistance that could bring everything together.

“There was nothing to lose in making the call,” Hilliard said. “The worst they could do was turn me down.”

They didn’t turn him down. Actually, the timing was perfect. While Hilliard was looking for help with his field, the Cannon Ballers were seeking a local baseball field that could use professional help.

Siegel, who is certified in turf management and has worked for the MLB Marlins, had relocated to the China Grove area from Florida last May, so it was an ideal challenge for him to sink his teeth into.

“Baseball is much more than a game, and this was a chance for me to give something back in the community,” Siegel said. “It’s not hard for a kid to go down the wrong path in life. But you give them a nice baseball field, give them something to do with their free time, and maybe baseball makes all the difference in their lives. This isn’t for our pocketbooks or for P.R. for the Cannon Ballers, it’s for the kids. This is not a one-time thing or a one-day thing. Maintaining this baseball field will be on-going.”

While Siegel has taken charge of the field rebuild, gregarious Wisconsin native Ryan Pegarsch, who holds the job title of  Manager of Community Relationships with the Cannon Ballers, is also on a tractor, donating his time and experience. He brings some joy to the job. It’s good to be out of the office.

“I’m enjoying getting my hands dirty,” he said with a laugh. “You’ve got a coach here at Southeast Middle School that obviously cares about the kids, and the Cannon Ballers organization is excited to be able to get out in the community and provide all the help we can. Baseball fields take time and we’re only in Phase One today, but the plan is to get everything level, to take care of the drainage issues and to get everything where it needs to be.”

Along with Hilliard, Southeast principal Davian Ellison watches the men and vehicles at work and beams.

“The donations from the community and from the Cannon Ballers mean everything,” she said. “When folks come to a ballgame, they may not remember the score, but they’ll remember the experience they had at our school. This is going to make that experience better.”

When the Cannon Ballers crew is finished, the Southeast Middle field has undergone one of those caterpillars-to-butterflies transformations.

It’s a different place. Maybe it’s not a field of dreams quite yet, but the progress is amazing.

“We knew they had the tools for a full rebuild, and the Cannon Ballers gave us their time,” Hilliard said. “We’re grateful.”

The Patriots are ready to play.

The middle school conference tournament is scheduled to be played at Southeast in early May. Hilliard is looking forward to it.

“This is what a baseball field is supposed to look like and how baseball is supposed to be,” Hilliard said. “I’m thinking about putting a sign up over there. You know — one that says build it and they will come.”