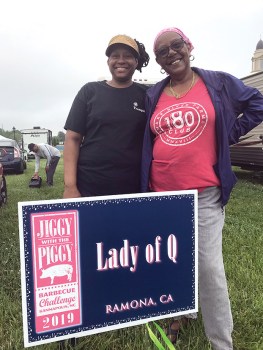 Sylvie Curry, right, stands in front of her sign at the Jiggy With the Piggy barbecue challenge. The Californian comes to Kannapolis to compete in the festival and to be with family. Photo submitted. 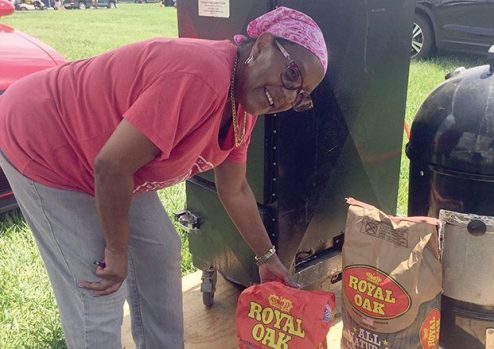 Sylvie Curry, known as the "Lady of Q," reaches for a bag of charcoal. The photo was taken during one of the past Jiggy With the Piggy barbecue competitions. Photo submitted. 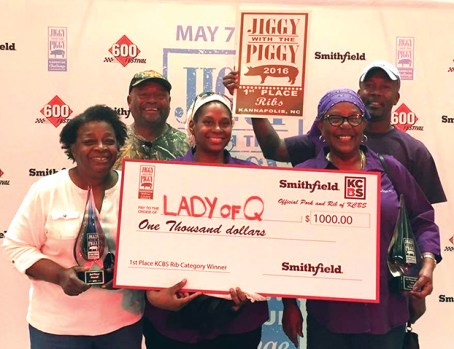 Sylvie Curry (second from right) and family hold up one of the awards and a check she won at the Jiggy With the Piggy competition in 2016. Photo submitted.

KANNAPOLIS — In a few weeks, southern California’s “Lady of Q” will board a plane and fly more than 2,000 miles to be in Kannapolis for the city’s Jiggy With the Piggy barbecue competition and festival.

Sylvie Curry forged a reputation as an elite pitmaster by claiming trophies at competitions around her hometown of Los Angeles. She became a familiar face in the barbecue world when she competed in Netflix’s “The American Barbecue Showdown,” a reality cooking competition that debuted on the streaming platform in 2020.

Even though she was born and raised in California and lives in Ramona, a small town north of San Diego, Curry makes the trip east each spring (minus the last two years) for Jiggy With the Piggy.

Jiggy With the Piggy is a Kansas City Barbecue Society sanctioned competition that draws competitors, judges and eaters from all over the Southeast. Named one of the Southeast Tourism Society’s Top 20 Events, the festival also features vendors and musical performances. Country great Sammy Kershaw will perform this year.

Jiggy With the Piggy will be back on May 13-15 after taking a two-year pandemic hiatus.

For Curry, the competition is about family.

Curry’s husband, Greg, hails from Kannapolis and most of his family still live in the area. Curry said it’s not exactly a family reunion, but it is “an opportunity to have a party where a lot of family gets together.”

That doesn’t mean she takes the competition lightly.

The first time she competed in Jiggy With the Piggy, she came in third place overall. That was before the Netflix show made her a recognizable figure in the barbecue competition scene outside of California.

“The first Jiggy With the Piggy I went to, people didn’t know me,” Curry said. “In California, they knew me but there they didn’t know me. It was like, ‘OK, what’s she doing?’ People couldn’t believe that I was the one doing the cooking and not my husband.”

Curry is used to standing out at competitions. She said there aren’t many women, or Black women for that matter, on the barbecue circuit.

“I’m very proud of it and one of the major reasons for it is I like the visibility of people seeing that there are Black women out there cooking,” she said.

Curry wasn’t looking to be a culinary role model when she smoked a rack of ribs on her backyard grill in 2006 and posted a picture on her food blog. The post caught the attention of another Los Angeles-based pitmaster, who reached out and asked Curry if she wanted to form a barbecue competition team.

Being a part of a bonafide barbecue team would’ve been unthinkable to Curry early in her life. Not only did she not cook barbecue, but she didn’t cook anything.

“Prior to getting married — my husband and I will be married 40 years coming this June — I didn’t really cook. That wasn’t my forte,” Curry said. “When I got married, I started cooking during the time Food Network started having shows with people like Emeril and stuff like that. So, I started watching that stuff and I enjoyed it. My goal was to make as many exotic things as I could.”

When she did get the barbecue itch later in life, it didn’t take her long to figure out how to do it well.

“Once you learn fire management of your pit and your grill, you go from there,” Curry said.

Curry’s team fared well in its first few competitions, but she admits it took time to perfect the process.

“There are different flavor profiles and different things judges are looking for that you can’t do in your backyard,” Curry said. “I had to fine tune that. It took a lot of watching YouTube videos, keeping up on a lot of the barbecue forums online and I took a couple of classes back in 2011. From there you just practice, practice, practice.”

In competitions, all four meats — chicken, brisket, ribs, pork — are important. Curry has a penchant for delivering an award-winning savory brisket, but ribs covered in a sweet sauce have been her best meat lately.

People took notice of Curry’s smoking success and nominated her to be cast in Netflix’s “The American Barbecue Showdown.” After a thorough, months long interview process, Curry was one of eight contestants chosen for the show, which was filmed in the Atlanta suburb of Covington, Georgia.

Curry remembers not just battling the other contestants, but fighting with the September heat to keep her fire at the right sustained temperature.

“It was a lot of fun,” Curry said. “The only problem was the heat.”

Unlike a typical barbecue competition, Curry had to whip up side dishes and use exotic meats she’d never dreamed of touching before, like raccoon. Despite those obstacles, Curry made it to the top three. She said the show earned her plenty of new followers on social media, but didn’t have the life-changing effect it did for other contestants. And she’s got no problem with that.

“I was the oldest person on there and I’m retired, so I’m not interested in working anymore,” Curry said. “I didn’t go through the whole thing like many of the other contestants to try to brand and market myself and get myself out there.”

Curry has continued to shine in barbecue competitions and is excited to see more events being held as pandemic conditions have eased.

She now competes solo under the name “Lady of Q,” but her husband is an integral part of the process. He helps her get smokers in place, distracts overly-chatty spectators and is always around to assist with taste testing.

Sylvie and Greg met in Michigan when he was working for Ford Motor Company and she was a professor of pharmacology at the University of Michigan. She was a pharmacist long before she started smoking meats. They’re both retired now and enjoy living in the quiet town of Ramona.

Curry keeps a few smokers and other barbecue equipment stashed in a shed at her sister-in-law’s house, so she doesn’t have to worry about bringing her entire competition setup. Curry’s sister-in-law, who works for the city of Kannapolis, helps her out during the competition.

Once everything is cooked and the meats are submitted to the judges, Curry said they gather as a family and feast together.