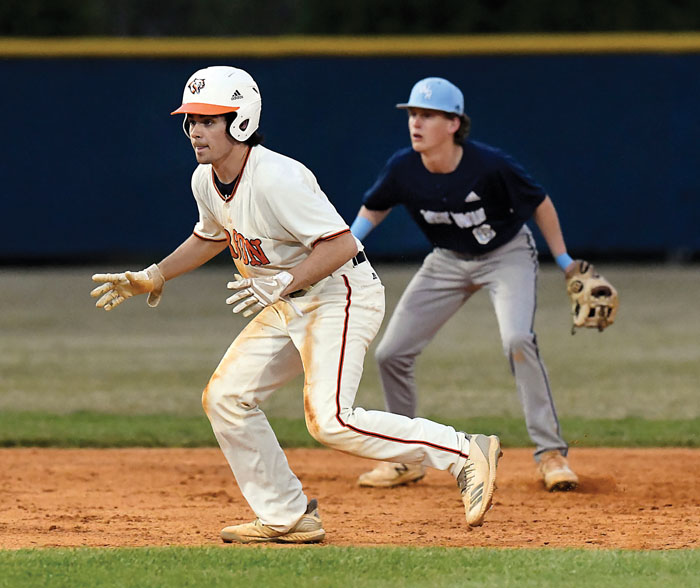 Carson's Cameron Burleyson will be playing for Catawba next. File photo by Wayne Hinshaw, for the Salisbury

KANNAPOLIS — Carson rallied for two runs in the bottom of the seventh and beat Northwest Cabarrus 4-3 in a semifinal game played on Saturday night in the F&M Bank Cannon Ballers Invitational.

Carson rallied in the seventh. Connor Rayfield’s pinch-hit double tied the game, and Cameron Burleyson had the walk-off single.

Mikey Beasley pitched into the fourth for Carson. Sam Safrit went the rest of the way for the win.

South Rowan won 4-3 against Wesleyan Christian Academy of High Point (14-4) in a Saturday semifinal in the F&M Bank Classic at Atrium Health Ballpark.

All the runs (for both teams) were scored in the third inning.

Noah Washburn pitched into the fifth for the win, and Cole Thomas got the save.
Colton Fisher’s hit started South’s big third. A walk to Coleman Overcash and Nathan Chrismon’s hit loaded the bases with one out. Jacob Ritchie delivered a two-run single. Ty Hubbard and Haiden Leffew put balls in play and got runs in. It was just enough.
South (14-3) and Carson will play three times this week, with both of their South Piedmont Conference meetings also coming up on the schedule.

The Falcons (13-5) scored three runs in a decisive top of the sixth to beat Lake Norman 8-6.

Luke Graham had three hits for the Falcons, while Peyton Summerall had two. Alex O’Rourke started on the mound for West. Drew Burton pitched four strong innings in relief and was credited with the win.

Chase Wigginton had three hits for the Wildcats (12-5).

Casey Gouge tripled to lead off the game for the Falcons, and Graham drove him in, but West didn’t do anything offensively after that.

Russell Vaughan pitched a two-hitter for Porter Ridge (12-5). Caleb Gant and Jake McGillivray backed him up with homers.

Chance Mako struck out seven and was in control for five innings in a 7-1 win against Parkwood. Logan Dyer finished up on the mound.

Parkwood pitched Ashton Plyler, the hurler who fired a 21-strikeout perfect game against Anson earlier this season, but the Mustangs had little trouble.

• East Rowan’s defense faltered in an 8-4 loss to Marvin Ridge.

Dylan Valley pitched four sharp innings, but the Mustangs made two key errors in the fifth with Nate Hayworth on the mound, as the game turned around.

East plays Lake Norman on Monday, while West will take on Sun Valley.

The Blue Bears finished the two-round tournament with a team score of 582 (14-over) to capture their first title since 2018.

Livingstone’s Joel Basalaine  shot 1-under and finished atop the individual leaderboard.

Basalaine needed a playoff hole to overtake teammate Xavier Proctor, who came into the second day as the individual leader.

An interest meeting for a South Rowan Junior Legion softball team will be held at the SR softball field on Sunday, April 24, at 4 p.m.

Girls must live in the China Grove or Corriher-Lipe school districts and must have turned 13 before Jan. 1, 2022.

Dean Mullinax and Kacie Stamey will coach the team.

UNC Wilmington’s Katie Knorr (Salisbury) is the Rookie Swimmer of the Year for the Colonial Athletic Association.

Ike Freeman (East Rowan) hit a pair of two-run homers for the Columbus Clippers in a Triple A game on Thursday.

He was the defensive coordinator at Hickory Ridge