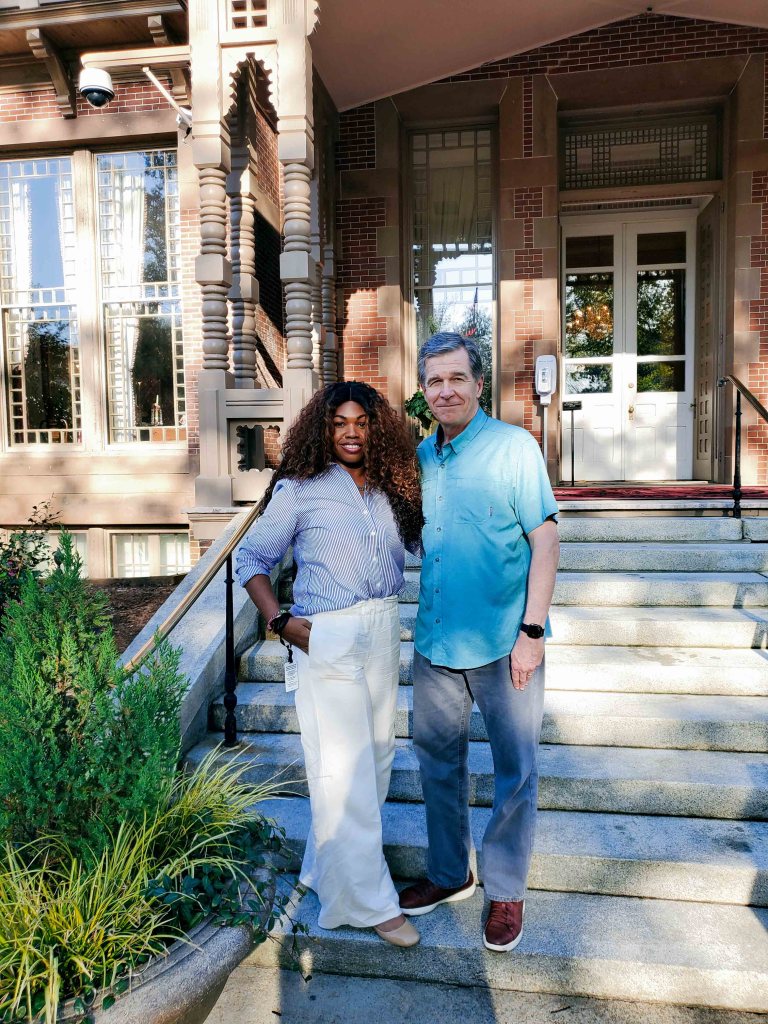 SALISBURY — Just over a decade ago, Daphné Moore had not finished high school and was working jobs that did not challenge her, barely paid the bills and offered little room for growth.

“I remember thinking, ‘There has to be something way better than this,’” she said.

She enrolled in the high school equivalency program at Rowan-Cabarrus Community College, completing her high school diploma in 2013. From there, she went on to graduate with honors with an associate degree in business administration from Rowan-Cabarrus in the fall of 2016 and transferred to Meredith College where she earned a bachelor’s degree in political science with a concentration in public affairs. At Meredith, she became a campus leader, serving as president and vice president of the Black Student Union, president and senate chair for Women in New Goal Setting and executive chair of the Student Government Association Executive Board.

“When I started looking at community colleges, I read a lot of reviews and decided to visit for myself,” Moore said. “Once I stepped onto the Rowan-Cabarrus campus, I saw a distinct difference. It was quiet, without a lot of rowdiness, and the staff was beyond helpful and told me step-by-step how to enroll and get all the help I needed.”

For many students, that first step toward earning a high school diploma leads to an unexpected love of learning and a sustainable career path.

The Rowan-Cabarrus College and Career Readiness program offers instruction at various levels to help students gain the skills they need to succeed in college, in their careers, and in their personal lives.

“Going back to school or starting college can be intimidating, especially when students lack confidence in basics such as math and reading,” said Dr. Carol Spalding, president of Rowan-Cabarrus. “Our programs are designed to meet students where they are and help them build competency in core subjects so that they can go on to achieve their educational and career goals.”

At Rowan-Cabarrus, Moore found support, encouragement and opportunities in and outside the classroom. She was secretary and vice president of the Phi Theta Kappa honor society, served as public information officer and vice president of the Rowan-Cabarrus Student Government Association and was inducted into the National Society of Leadership and Success. She also was the first Rowan-Cabarrus student to graduate as a Scholar of Global Distinction under a partnership between the community college and UNC World View.

“One of the things that inspired me at Rowan-Cabarrus was the instructors and staff who took an interest in me,” Moore said. “Barb Meidl, director of Student Life and Leadership, asked me what I wanted to be and where I wanted to go. She was invested in me. It’s been some years since I graduated, and she is still in my circle, cheering me on and giving me motivation.”

While attending Meredith College, Moore worked in Sen. Erica Smith’s office and interned under Rep. Kelly Alexander. Her interest in politics blossomed, eventually leading to her current position in Gov. Roy Cooper’s office working within his N.C. Commission on Volunteerism and Community Service. Moore also graduated as part of the first cohort of the Meredith College Voices of Change Political Institute, which seeks to address the gap in representation of Black women and people of color in office by building an informed community to support future candidates.

“Eventually, I am looking to run for elected office in North Carolina because I want to be in a position where I can make a difference,” Moore said. “I would like to run for a seat on the North Carolina Council of State, because I see a lot of need. Policy is something that is very important to me. I don’t think people realize how much it affects our communities.”

When she looks back on her journey, Moore credits Rowan-Cabarrus for “lighting her spark.”

“It is amazing to think that I went from not even having a high school diploma to working in the governor’s office. There really are no words for it,” she said. “If I could go back and talk to Daphné back then, I would say, ‘Go forward, be confident, and build the character to get to where you’re supposed to be.’”

“One of the biggest things I learned on my educational journey is that you have to take the initiative,” she added. “Just make up your mind and start. Whatever you put in, that is what you will get out. My father frequently reminds me what my late grandmother would say to him: ‘A made up mind will take you far.’”