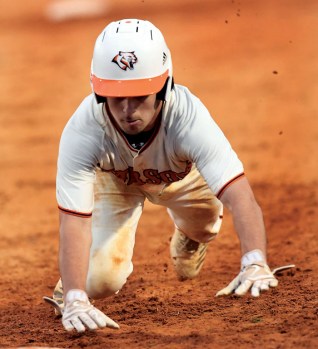 Carson's Cameron Burleyson dives back to first. photo by Wayne Hinshaw, for the Salisbury Post 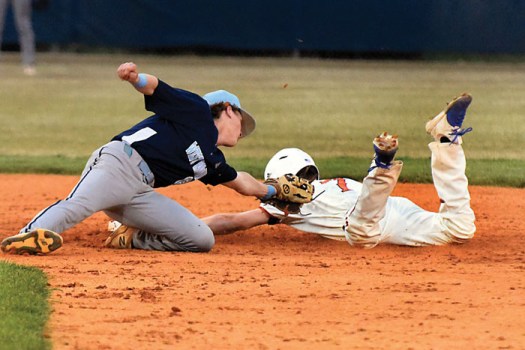 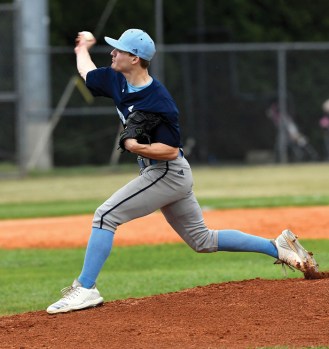 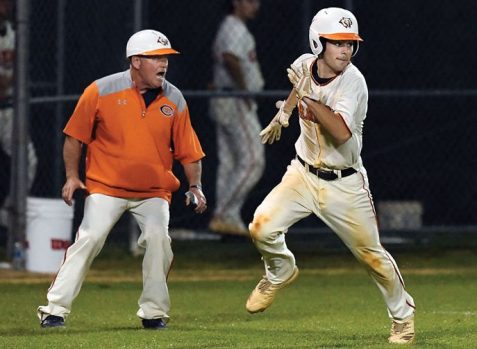 Carson's Daniel Savage rounds third base as coach Chris Cauble gives him the green light. photo by Wayne Hinshaw, for the Salisbury Post

CHINA GROVE — Carson junior Hayden Simmerson may be the county’s top uncommitted baseball talent, but he’s also been the county’s unluckiest player of 2022.

Carson hasn’t taken advantage of several superb pitching efforts by Simmerson this season. There have been tough losses and there have been tougher no-decisions, and the sturdy right-hander carried a deceiving 2-4 record into Wednesday’s South Piedmont Conference game against surging West Rowan.

First baseman Samuel Safrit made a diving catch of a Noah Loeblein liner that really helped Simmerson when it was a 2-1 game.

Simmerson dominated the game for 6 1/3 innings, striking out 11, walking two and holding the Falcons to two hits and an unearned run. Matthew Connolly doubled and scored on an error for the Falcons.

When Simmerson reached the pitch-count limit of 105 in the seventh, things got interesting in a hurry, but the Cougars got an out apiece from relievers Austin Efird and Safrit and held on for dear life. Down 8-1 going to the bottom of the seventh, West (12-4, 8-2) actually got the tying run to the plate.

West had won eight in a row. The Falcons, who had nipped Carson 3-2 on Tuesday, dropped a game behind South Rowan and East Rowan in the SPC standings.

West will take on East Rowan right after the holidays.

Jordan King had three hits. His RBI singles in the first and third innings gave Simmerson that 2-1 lead.

In the fifth, Simmerson’s two-run double made it 4-1.

Carson pieced together a four-run top of the seventh to create a comfortable cushion, and the Cougars needed it when all heck threatened to break loose after Simmerson had to call  it a night with one out in the seventh.

A bases-loaded walk to Casey Gouge made it 8-2. Luke Graham grounded into a fielder’s choice for the second out of the inning, but a run scored. After a walk reloaded the bases, Zander Burton’s two-run single made it 8-5, but Safrit was able to get Connolly on strikes to end the game.