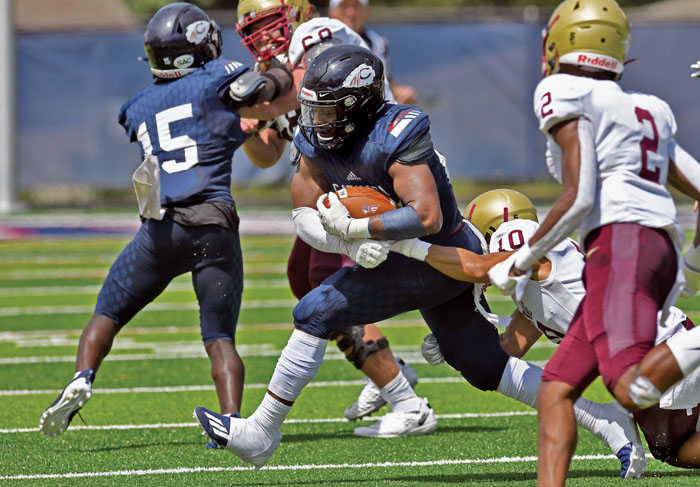 SALISBURY — Spring is always the thinnest time of the year for a Division II football program, with last fall’s seniors relegated to cheering duties and the latest batch of recruits still attending their high school proms.

The show must go on, but without sufficient numbers of linemen on the roster to stage an all-out “Spring Game,” Catawba concluded spring drills on a chilly Saturday with “mostly situational stuff,” as head coach Curtis Walker put it.

“It was more of a spring practice or spring scrimmage than a spring game,” said Walker, who guided the Indians to a 5-4 record last fall. “We got a lot of good work in and we we were able to do it in a very competitive atmosphere. But we had to be smart about what we did with the number of lineman we had available. The good news is we were able to stay healthy.”

They worked on red-zone situations, a strength for last season’s defense.

They worked on two-minute drills.

Catawba’s best player several times last season was outstanding punter/kicker Clayton Crile. There was some concern that he might up to a Division I program, but he is enjoying his time at Catawba. Crile displayed his prodigious footwork on Saturday, and with the wind behind him, boomed a field goal from record-breaking distance.

The quarterback position is always paramount, and Catawba will have a new one. Walker was impressed this spring with Preston Brown, who transferred from the Charlotte 49ers.

“He’s fit, he’s put together, and while he may not be the tallest, he’ll have one of the biggest arms in our conference,” Walker said. “He got most of the reps this spring and held his own. He’s got an opportunity here, and he realizes that, but he didn’t take anything for granted. He showed he can make the throws and he showed that he will stand in the pocket and deliver the ball.”

While Brown will be the frontrunner going into the fall, a lot of QB competition is on the way. That includes Kam Hill, a touted recruit from Reagan High, as well as three more transfers. The quarterback room for new QB coach Jake Medlock, empty not too long ago, will be full.

Center Cameron Ivey-Young is the leader of the offensive line. That didn’t change this spring. Young guys Kanyon James (6-3, 290) and Zach Brown (6-2, 270) made major strides.

“Brown had a fantastic first week, just came out on fire, and was really moving people around,” Walker said. “James got in work at guard and tackle and has the skill set to play either position. He looked good.”

Running backs Jyrea Martin and Daniel Parker got banged up last fall, but both are much healthier now.

“They got the rugged yards all spring,” Walker said.

Leroy Bracey Jr. is another name to know as far as the backs. He has moved from slot receiver to running back and has game-changing speed. He broke runs of 30 and 40 yards on Saturday.

“Not big, but lightning-fast,” Walker said.

Catawba is deep at tight end. Kobe Christian stood out this spring

So did receivers Jaden Lockhart and Willie “Pooh” Brantley.

“Those two found a groove and emerged as playmakers,” Walker said. “They have speed and they made athletic catches.”

Brantley had a 48-yard touchdown catch on Saturday.

It could be a stout receiving corps, as Kujuan Pryor returns and already has proven he’s a huge threat.  Sprinter Rasheed Singleton made some spring strides.

“Pryor had a long run on a reverse Saturday as well as a big third-down catch,” Walker said. “Singleton can get down the field and has started to stretch his wings some.”

The defense had its moments during spring drills and again on Saturday.

Mike Jones, a still-growing, young defensive lineman, turned in multiple sacks and tackles for loss on Saturday, while Semaj Johnson is thriving after a move from defensive end to more of an interior role.

“He’s a veteran now and he’s become a leader of that group,” Walker said. “His experience is starting to show. He made a lot of plays on Saturday.”

Bryan Stewart, a youngster from Concord’s Robinson High, showed he is as an exciting prospect in the defensive backfield.

Calvin “CJ” Stephens, a veteran DB who came to Catawba from Chowan, made one of the plays of the day on Saturday when he picked off one of Brown’s passes during a two-minute drill.

The Indians got their work in, they stayed healthy, and they will welcome a number of prize recruits this summer.

Walker is convinced the team is on the upswing.

Walker’s younger son, Deuce, ran a hand-timed sub-11 100 meters in a recent meet and is doing good things for the Salisbury High track and field team.

Walker’s older son, Jalon, one of the nation’s celebrated linebacker recruits in 2021, graduated from Salisbury at the close of the fall semester, is enrolled at the University of Georgia and will take part in the annual Red-Black Spring Game game between the hedges at Sanford Stadium.

He’s created a lot of buzz in spring drills in Athens with his unusual combination of size, speed and football IQ.

That game is set for Saturday, April 16.

“From Salisbury High to the national champs,” Coach Walker said. “It’s going to be exciting to see Jalon live against the big boys for the first time.”