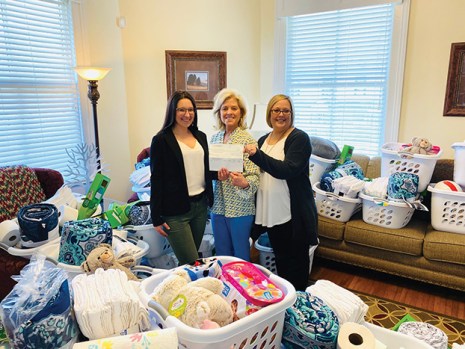 Brianna Earnhardt (left) and Renee Wilcox (right) from Wallace & Graham stand beside Renee Bradshaw, executive director of Family Crisis Council. The trio is surrounded by baskets filled with supplies that'll be given to survivors of sexual assault. Photo submitted. 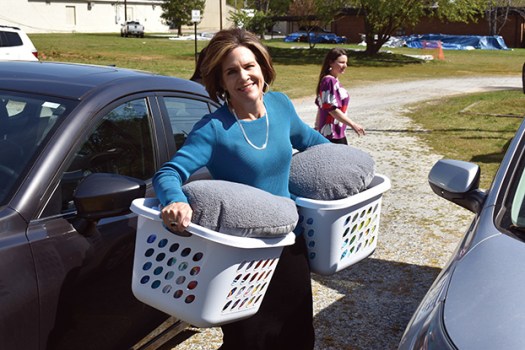 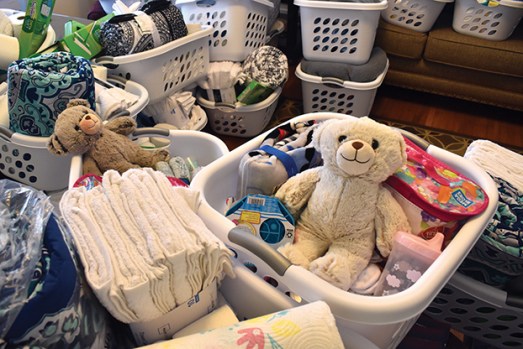 Half of the baskets are filled with toys, snacks and supplies for children and the other half have blankets, towels, cleaning supplies and other products for mothers. Ben Stansell/Salisbury Post 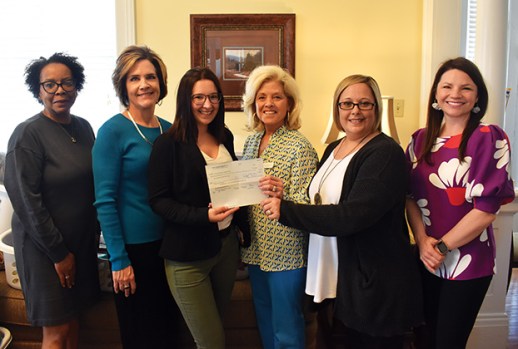 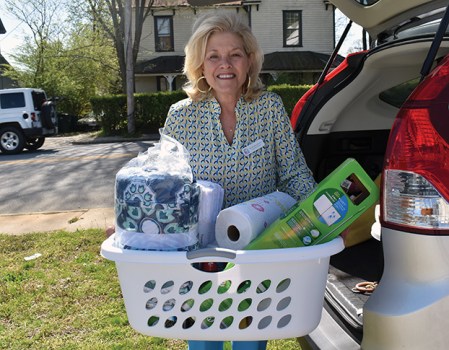 By the time every basket was unloaded and stacked together, the couches and tables in the nonprofit’s waiting room were hardly visible. After delivering the baskets, the law firm presented Renee Bradshaw, executive director of Family Crisis Council, with a check for $3,000. Bradshaw was awestruck by the gesture.

“It is indeed a wonderful thing that they have done,” Bradshaw said. “The ladies and the children will be greatly appreciative of being able to start out with items they need. It took a lot of work and it means so much to me.”

Family Crisis Council works to empower victims of rape, sexual assault, incest and domestic violence to take back their lives.

The law firm donated the baskets and money through its Wallace & Graham Gives charitable program. The firm says it donates $50,000 annually to a number of local organizations working on causes such as education for underprivileged youth, mental health counseling for veterans, sustainability and more.

Wallace & Graham brought the baskets to Family Crisis Council during Sexual Assault Awareness Month, an annual campaign that aims to raise awareness about the causes and risk factors for sexual assault and empower individuals to take steps to prevent it from happening.

The baskets will be given to victims of domestic violence and sexual assault when they leave the Family Crisis Council’s communal living shelter. The shelter is often the only place many victims have to go after leaving an abuser or dangerous situation.

“The main purpose of the shelter is to give them a safe haven and then start working with them to move forward,” Bradshaw said.

The baskets are intended to supply victims with products they may need when starting over. Half of the baskets are for mothers and contain items like Clorox wipes, towel sets, blankets and other hygiene products. The other half are for children and are packed with soccer balls, cups, snacks and games.

“We hope the survivor packages and our donation will help victims of violence feel deeply supported in this community,” said Whitney Wallace Williams, a partner at the firm and chair of the Wallace & Graham Gives committee. “We want to empower victims with the resources and courage they need to end the cycle and to pursue a new ending for their story.”

The survivor baskets and donation was proposed and executed by Wallace & Graham paralegals Renee Wilcox and Brianna Earnhardt. The two have a special appreciation for the council’s work.

Wilcox’s father worked in law enforcement as chief of police and her family recognized the impact that a successful women’s shelter has on improving the mental and physical well-being of violence victims. Earnhardt’s mother has spent her career at Rowan County Department of Social Services and knows how critical victims’ access to resources can be during their deepest times of need.

The baskets will be another resource the Family Crisis Council deploys to help survivors who leave its shelter. The council also tries to make the process easier by providing mattresses, bedding and local resources for housing, food and employment.

“We try to help them with anything they need to get off their feet,” Bradshaw said.

Family Crisis Council helped more clients last year as documented instances of sexual assault increased. In 2020, there were 179 call to Rowan County 911 regarding sexual assault and related offenses. In 2021, that number increased to around 226 calls. Last year, Family Crisis Council served a little over 700 clients, including 89 individuals who stayed in its shelter.

“We really work with people from the moment of victimization all the way through the moment we call survivor hood,” said Spencer Dixon, Family Crisis Council’s resource and media coordinator.

All of the services Family Crisis Council offers are free of charge.

Family Crisis Council is funded by grants, foundations, governments and individuals. The council is hosting the Stomp Out Sexual Assault 5K at 9 a.m. on April 23. The race will be held at Knox Middle School with runners racing on the Salisbury Greenway. All proceeds will benefit the Family Crisis Council. Registration can be found online at runsignup.com.

The council is also planning its sixth men’s fashion show for June 4 at the Salisbury Country Club. More details will be available closer to the event.

More information about Family Crisis Council can be found online at fccrowan.org.