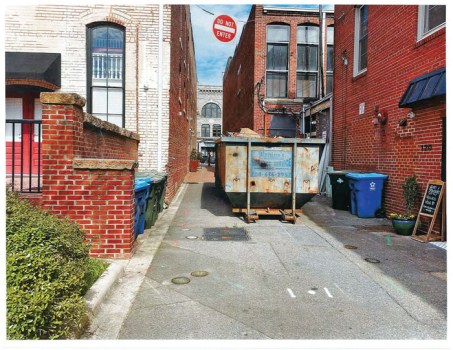 City of Salisbury — City Council members last week approved a right-of-way use permit that allows the placement of a dumpster until August for adjacent renovations at 119 and 121 North Main St. 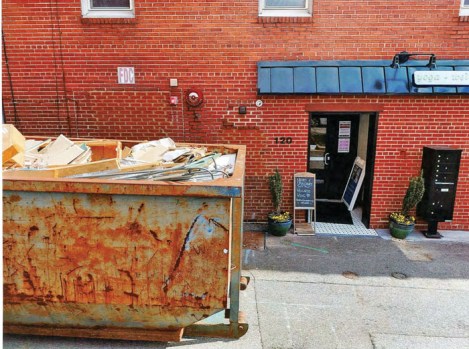 Submitted — Heart of Salisbury Yoga Owner Wivianny Dehaas says her business, which houses a handful of other micro-businesses, has suffered an 80% revenue loss over the last few weeks due to ongoing construction at 119 and 121 North Main St. She spoke in opposition Tuesday at the City Council meeting to placing the dumpster and construction equipment in the area known as Hogan's Alley and called for such equipment to be placed in front of those buildings instead. City Council members ultimately granted a right-of-way use permit for the dumpster's placement in the alley until August. 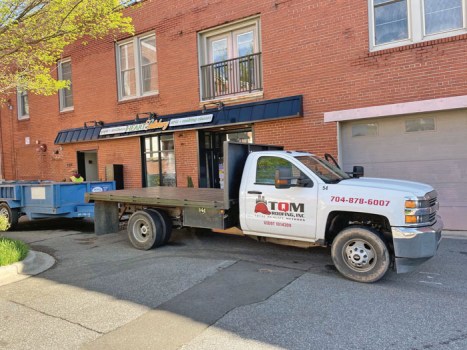 Submitted — Heart of Salisbury Yoga Owner Wivianny Dehaas says her business, which houses a handful of other micro-businesses, has suffered an 80% revenue loss over the last few weeks due to ongoing construction at 119 and 121 North Main St. She spoke in opposition Tuesday at the City Council meeting to placing the dumpster and construction equipment in the area known as Hogan's Alley and called for such equipment to be placed in front of those buildings instead. City Council members ultimately granted a right-of-way use permit for the dumpster's placement in the alley until August.

SALISBURY — Business merchants at Heart of Salisbury in the Hogan’s Alley area downtown say a permit for a construction dumpster for adjacent renovations has evolved into a “dangerous construction zone” that’s significantly harming business.

Last week, City Council members approved a right-of-way use permit for local engineer and business owner Shawn Campion, who is working on renovations to 119 and 121 North Main St. The request was to place a dumpster in the alley adjacent to the side and rear of his businesses for interior and exterior renovations until Aug. 29. Additionally, he was approved to use four parking spaces in the parking lot of the alley to store necessary equipment for the renovations until April 12.

The permit calls for at least five feet of pedestrian access and space for the fire connection. A memo from City Engineer Wendy Brindle says the dumpster doesn’t block access into any business in the area but will extend into the right-of-way in front of Heart of Salisbury.

Heart of Salisbury is a wellness destination located in the former Flowers Bakery Building at 120 East Innes St. It’s a wellness incubator that houses multiple micro-businesses that specialize in wellness, arts, retail, therapy and fitness classes.

Heart of Salisbury Yoga owner Wivianny Dehaas says her business has suffered an 80% revenue loss since the placement of the dumpster, with no sales happening on the days when the construction trucks obstructed her business.

“All of these businesses are being affected by the constant movement of equipment only three to six feet away from the building’s entrance, extremely loud noises from machinery, dust, debris being thrown from the top of the roof down,” Dehaas told the Post. “When the dumpster has been parked there, it has also been an issue with debris falling all over the area, dust from potentially toxic materials, impediment for pedestrians, blocking the view of our entrance and causing a safety concern at night as it creates a hiding spot for potential perpetrators.”

Dehaas was one of several who work at Heart of Salisbury who spoke during the public comment period in opposition to the dumpster placement. She cited an alternative option, calling for Campion to place the dumpster in front of the two buildings he’s working on which are located on North Main Street and wouldn’t obstruct businesses in the alley. During the meeting, Brindle said her professional opinion is that it’s less intrusive in the alley, but that the ordinance was designed to allow for downtown renovation in front of such buildings and has been done many times before.

In an email to the city regarding his permit, Campion listed challenges with that option. Those challenges included the containment of noise to the back side of the building, an existing “comfortable walkway” in the alley, a less efficient loading path to move materials, no debris on cars in the nearby parking spaces and potential damage to the newly paved Main Street.

Campion also referenced the same during his public comments at the council meeting, and said it was the cost of “urban development” and progress.

The Post was unable to reach Campion for additional comments about the construction and dumpster placement.

But Sue McHugh, who works for the Heart of Salisbury and sits on the city’s Historic Preservation Commission, told the Post while she’s seen the damage of dumpsters in some areas, she believes Main Street was purposefully paved to accommodate heavy traffic. She added that she’s been to numerous cities where other accommodations were made to minimize an impact on nearby businesses, such as scaffolds and covered walkways.

McHugh and Dehaas both emphasized that they’re in support of downtown progress and are happy to see Campion’s work to transform his two buildings. But McHugh finds the ultimate decision “fiscally irresponsible for everyone and disrespectful” due to the significant impact the construction zone is having for Heart of Salisbury. McHugh added that Heart of Salisbury’s unique location in the alley already poses some challenges.

“My goal is not to stop progress, but to keep 10 small businesses from suffering financial loss,” Dehaas told the Post.

McHugh said with the handful of vacant buildings in that area of North Main Street, there’s minimal foot traffic compared to that of the adjacent alley, which was designed for pedestrians. Additionally, not all materials and debris from the construction work is landing in the dumpster.

“They’re wearing hard hats and we are not,” McHugh said.

Two adjacent business owners indicated support for the dumpster to be placed in Hogan’s Alley. Those include Abigail Young, who said its placement there wouldn’t sacrifice any parking, and Dionna Milem, who also noted the parking element. Young operates Abigail’s Bakery at 113 North Main St. and Milem operates Spice & Tea Exchange at 115 North Main St.

During the meeting, Mayor Pro Tem Tamara Sheffield said she lived in that alley area when both Barnhardt Jewelers and Heart of Salisbury were being constructed.

“It was not fun, but look at the reward,” she said.

Sheffield added that “damaged roofs ruin downtown” and that someone is willing to invest in those properties. She called it “a necessary evil to move forward” with downtown progress.

“My perspective is that while it may not be popular, it’s short-lived,” Sheffield said. “It’s less dangerous being back there. I’ve actually seen the dumpster in play.”

Sheffield asked for “neighborly compassion” and for the area to be closely monitored to ensure codes are being followed.

McHugh told the Post she recalls construction at Barnhardt Jewelers when it relocated to downtown and said it also affected Heart of Salisbury, but that it didn’t block the entrance or impact business to the level currently being seen.

Council members agreed that the dumpster should not be in place during the weekend of May 21 when the city hosts its annual Cheerwine Festival.

“I guess it’s just everybody who comes before has to deal with then the inconvenience of the people who come after,” Alexander said. “But then, that’s what we want in our downtown. We want things to happen.”

Council member Anthony Smith asked if the city has any pool of relief money for businesses that may suffer from the dumpster placement. Interim Manager Brian Hiatt said the city doesn’t, and added that it’s a challenge for any downtown in his experience.

A few residents tied to businesses in Hogan’s Alley also spoke in opposition during Tuesday’s council meeting. Those include Syed Ahmad and Whitney Peckman, who noted the safety hazards to pedestrians and the period of time in which the dumpster would be situated. Ahmed operates Airbnb rental units.

“Progress and property development without proper planning, cooperation and communication has the potential of destroying communities,” Dehaas told the Post. “What makes our downtown special is not just historic buildings, it is also the businesses and people who occupy them. A remodeled building surrounded by empty buildings does not make up a thriving downtown. We need to consider the people and businesses who have already invested in downtown and are a part of it.”