South rallies in seventh for 5-3 victory over East 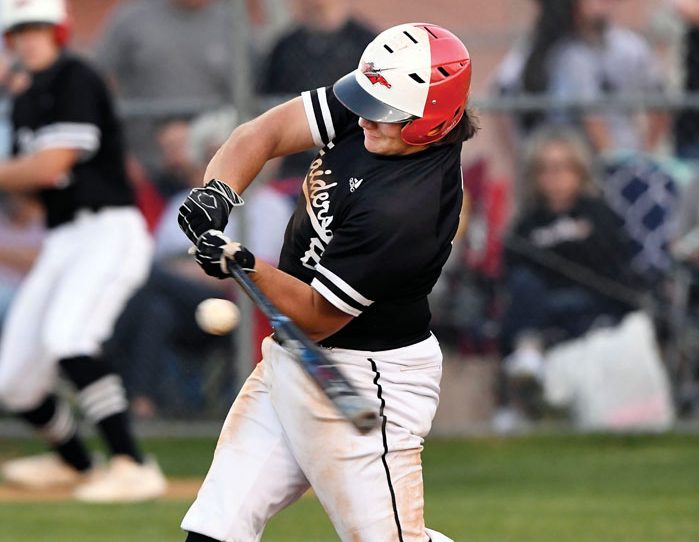 South's Haiden Leffew drove in the last run of them game. File photo by Wayne Hinshaw, for the Salisbury Post

GRANITE QUARRY — South Rowan came to Staton Field for one reason and one reason only Friday night — to win a baseball game.

Mission accomplished. The Raiders rallied for three unearned runs in the top of the seventh inning and prevailed 5-3 over East Rowan, surging back into a tie for first place in the North Piedmont Conference.

“I think it was just a really competitive game between two really good teams,” winning coach Thad Chrismon said after South (10-3, 7-1) earned a split of its two-game series with the Mustangs. “It was almost like a heavyweight fight. People were throwing punches and other people were throwing them back. It was a great game to be a part of.”

The Raiders used a last-inning sacrifice fly by first-baseman JD James and a two-out, run-scoring single by Haiden Leffew to secure a see-saw battle. South had already squandered leads of 1-0 and 2-1 when it sent eight batters to the plate in the decisive seventh.

“Felt like this was a game we really needed to win,” Leffew said after driving home two runs and reaching base four times. “We chipped away inning-by-inning, getting a run here and a run there. We all knew what we had to do.”

Both starting pitchers — unbeatens Chance Mako for East and Cameron Crainshaw for the guests — were out of the game by the time South began its final charge. The public address operator had already blared Semisonic’s “Closing Time” over the ballpark speakers, delighting the bone-chilled home crowd.

“Yeah, but this was never in the bag,” losing coach Brett Hatley said after East (13-2, 7-1) suffered its first conference setback. “We just have to do a better job with runners in scoring position in late-inning games. And you can’t walk the leadoff batter when you’re trying to hold onto a one-run lead.”

That batter was Finch McMillin, South’s No. 9 hitter, who walked on a 3-2 pitch from ER reliever Dyer Logan. One out later Nathan Chrismon drilled a single into center field before lefty-swinging  Ty Hubbard coaxed a walk on another 3-2 offering. With the bases loaded, cleanup hitter Jacob Ritchie smashed a grounder that East third-baseman Cameron Padgett mishandled for a run-scoring error that tied the score 3-3. Then James — who had dropped down a perfect sacrifice bunt in the South sixth inning — hoisted a sac to fly to left that gave the Raiders their third lead of the game.

“We had unfinished business,” Ritchie said after collecting two hits and a first-inning RBI. “Nothing came easy. We had to earn everything to give ourselves a chance.”

Leffew closed the scoring with a sharp, groundball single up the middle that plated Hubbard. The victory went to South right-hander Chandler Oddie, aided by an infield that turned double plays in the sixth and seventh frames. He spelled Crainshaw and worked out of a bases loaded/none out jam in the sixth, then faced only three men in the seventh.

Dyer took the loss. He allowed two hits and no earned runs in 1 2/3 innings. Unbeaten East starter Mako was chasing his fifth victory, but wasn’t at his best. In 5 1/3 innings the tall right-hander yielded two runs on four hits, walked four and hit a batter.

“He did his job,” Hatley said. “You come out of a 2-1 ballgame and you did your job. He pitched well enough to win.”

Except he didn’t. Hatley felt a controversial lineout-turned-DP off the bat of Tristan Miller in the Mustang sixth was most damaging. “The double play that the guy picked, but they ruled he caught it — that was a backbreaker,” Hatley said.

In the end, Chrismon was pleased the Raiders were determined and diligent enough to win under pressure.

“It was a good week,” he said after South improved to 4-1 on the road. “We have a good attitude and are happy to come away with a split. There’s still a long way to go, so we’ve got to finish strong.”