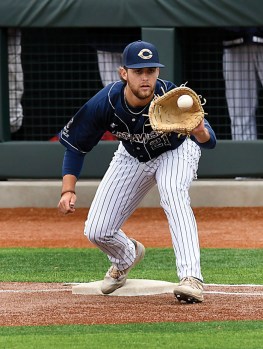 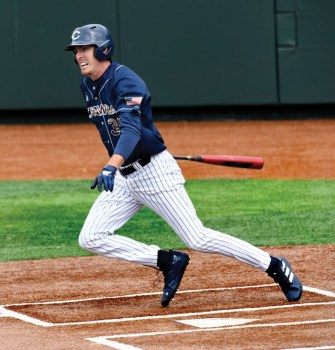 Catawba's Henderson Lentz gets a hit. photo by Wayne Hinshaw, for the Salisbury Post 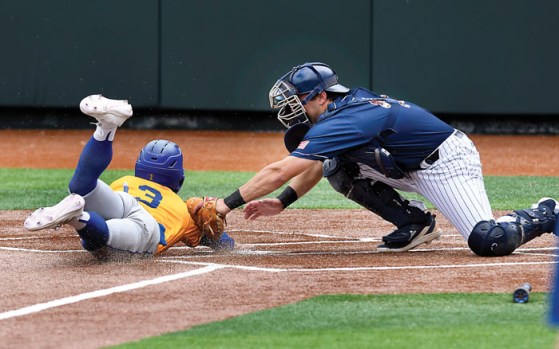 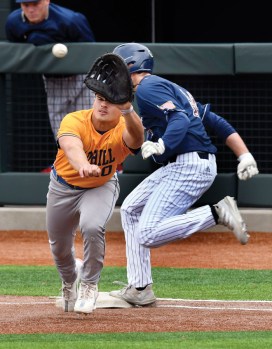 Catawba's Harrison Jackson was safe at first base on a hit as Alex Naran awaits the throw. photo by Wayne Hinshaw, for the Salisbury Post 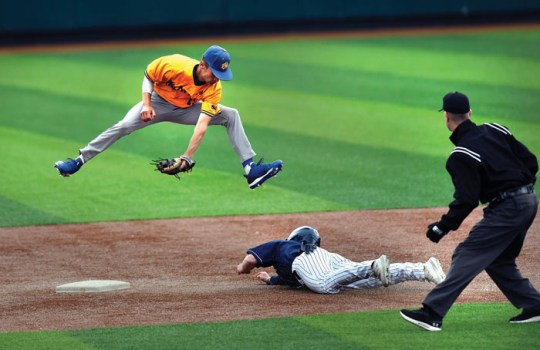 Catawba's Jackson Mitchell slides safely in to second base after a high throw to Chad Sikes of Mars Hill. photo by Wayne Hinshaw, for the Salisbury Post

SALISBURY — Catawba pitchers Mason Gwyn and Michael Gracer combined on a one-hitter in the second game of Saturday’s home doubleheader with Mars Hill.

And the Indians still lost.

Catawba fell 2-1 in the nightcap after rallying from four runs down to pull out the first game 8-7 in 12 innings.

In a year in which the lineup has been reconstructed nearly as much as the beloved ballpark, the Indians have managed to be part of a massive tie for second place in the South Atlantic Conference with Lenoir-Rhyne, Newberry and Queens.

Any chance Catawba had for a super season went out the window when stellar second baseman Joe Butts went down with an Achilles injury on the first day of March when the Indians were playing a non-conference game at Belmont Abbey. Butts had been punishing pitchers throughout the month of February and was batting .397 and stealing bases at will when he got hurt.

“Joe rounded first base at Belmont Abbey and it was like he blew a flat,” freshman right fielder Dylan Driver said. “Next thing you knew he couldn’t walk. Losing him really hurt us. He was our guy.”

With Butts down, the pressure mounted on other parts of the lineup. Unexpected slumps occurred.

Now Driver has become one of Catawba’s “guys” long before anyone expected to him to be.

He entered the season with the typical freshman role of pinch-hitter, pinch-runner and late-inning defensive replacement. Head coach Jim Gantt has been high on Driver for years, but the game plan was to bring him along slowly and allow him time to adjust to college pitchers and the college game.

“I had a small role I had when went to Florida to start the season,” Driver said. “Every time I got an at-bat or went in for defense, it felt like I was going on a business interview. But I just took it game-by-game, tried to make the most of every opportunity.”

He leads Catawba’s standard starters with a .333 batting average. He’s shown some pop with two homers, eight doubles and a triple in 84 at-bats, and he can really run. He’s 12-for-13 on steal attempts.

“The pitching is different, more velocity, tougher breaking balls than what I was seeing in high school and American Legion, but the coaching staff here has helped me adjust to all of that,” Driver said. “Every day I get a little more confident going out there. It’s a big difference knowing you’re going to get four at-bats than going up there and trying to succeed as a pinch-hitter.”

Defense is what Driver does best. Gantt has said that all along. Some adventurous runners have tested his arm. He’s thrown out six to lead Catawba’s outfielders.

“Two of those assists were on plays at the plate, the rest came when guys were trying to stretch singles into doubles,” Driver said. “We got those outs because guys handled the tough hops and make the tags.”

In the first game of the three-game series with Mars Hill, on a chilly Friday night, Catawba won convincingly. It was like old times. They gave the Lions an 11-3 pounding behind ace Greg Brown. Brown has started 10 times and has a 2.77 ERA, fifth in the SAC, but he has a modest 4-2 record. He’s fourth in the league in strikeouts with 73. He probably should be 8-2, but the Indians haven’t always hit behind him. Driver helped ignite the offense with two doubles and two walks in his four trips to the plate. He scored four runs.

Down 6-2 after four innings in Saturday’s first game, Catawba needed to rally — and did. Henderson Lentz, the former North Rowan standout, had three hits. Harrison Jackson had three hits. Luke Spiva went 2-for-2 with two RBIs. Jackson Finger went 2-for-2.

Catawba did enough to catch up with the Lions in the eighth. Cameron Mills finally won the game with a walk-off single to center in the 12th.

Former Carson hurler Ryan Street was huge, getting 10 outs in a long relief outing. Closer Robbie Cowie shut down the Lions in the ninth, 10th and 11th, throwing 48 pitches.

Adam Dossenback put up a zero in the top of the 12th and earned the win.

Then the Indians got sensational hurling from Gwyn and Gracer in the nightcap, and had every chance for a three-game sweep, but never got the bats going.

Tyler Lala had a homer and a sac fly for the Lions.

Driver had a walk and a single and promptly stole second both times he reached base.

With Catawba down 2-1, Driver was at third base in the sixth inning of the seven-inning nightcap when Mills, the hero of the first game, rapped into a double play.

Catawba went down 1-2-3 in the seventh and settled for taking two out of three in the series and also settled for being in a four-way tie for second instead of being in second place alone.

Catawba scored 20 runs in the chilly series, but didn’t hit a home run. Homers were expected to plummet with the park’s increased dimensions this spring, and they have.

In 40 games this season (home and road), the Indians have launched only 23 homers. That figure is tied for ninth in the 13-team SAC.

But while the Indians haven’t been great to this point, they are still good, still superbly coached, still dangerous.

They’ll be a tough out when the SAC tournament rolls around.

And with young players such as Driver, they’re going to keep getting better.

“I’m learning every day,” Driver said. “I’ve just got to do what I do and not try to do too much.”