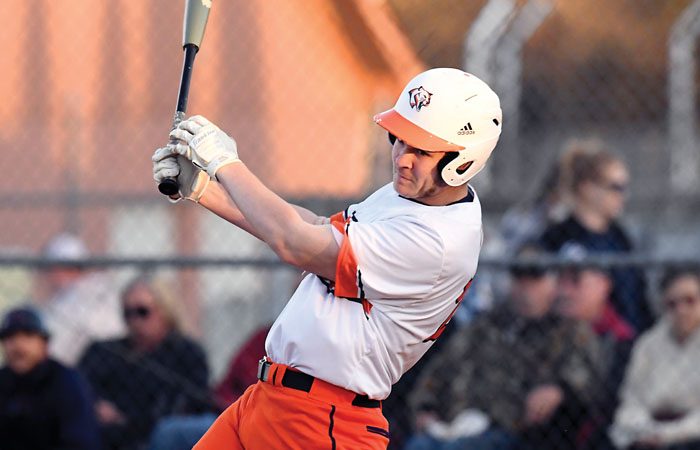 Jordan King drove in the game-winning run for Carson. File photo by Wayne Hinshaw, for the Salisbury Post

The Cougars (9-5, 5-3) didn’t score until the sixth when Cody Russell’s lead-off double led to the run that tied the game 1-all.

In the bottom of the seventh, Hayden Simmerson doubled with two outs, and Jordan King’s line-drive single to center plated the winning run.

Simmerson hasn’t had much luck as far as wins and losses this season, but Carson’s ace was very good again. He struck out 11, walked two and allowed three hits in six innings.

Casey Crawford pitched the top of the seventh and got credit for the win. Crawford struck out two.

Alex Darbutt struck out 10 for the Vikings.

Carson was swept by East Rowan, so the Cougars are unlikely to win the SPC, but with two games left against both South Rowan and West Rowan, they’ll have a big say as to who does win it, as they move toward the playoffs. Central is 0-8 in league play, but has come close several times against the top squads.

In the NCHSAA RPI rankings for 3A West, East Rowan is first, West Rowan is fifth, South Rowan is eighth, Northwest Cabarrus is 12th and Carson is 17th.

MOUNT ULLA — The South Rowan-East Rowan split was welcomed by West Rowan, which moved into a tie for first with the Mustangs and Raiders.

Matthew Connolly’s three-run homer over the Blue Monster was the key blow.

Pfeiffer recruit Jake Blevins got the job done on the mound again. He allowed three hits, struck out eight and didn’t walk a batter.

West’s schedule is loaded toward the back end. While the Falcons are definitely contenders, they haven’t played Carson, South or East yet.

East Davidson didn’t get a 10-run lead until the top of the seventh, so the game went the distance.

Burleyson pitched into the fifth and took the mound loss.

A.L. Brown’s struggles in the Greater Metro Conference continued Friday with a 7-1 loss to South Iredell.

In a wild Central Piedmont Conference game on Friday, Davie spotted West Forsyth a 6-0 lead and came back to win 24-10.

Davie had a six-run third, an eight-run fourth and a five-run seventh.

Owen White (Carson) is ranked No. 8 among Texas Rangers prospects and was the opening-night starter for Hickory at Winston-Salem in a high Class A game.

It was a mixed bag for White, who struck out three with no walks in three innings. He picked off one baserunner. The bad news was six hits, including two solo homers. He didn’t get a decision. Winston-Salem won the game 7-5.

Austin Love (West Rowan, UNC) opened the season with Peoria, the high Class A team of the St. Louis Cardinals. The big right-handed pitcher is ranked 24th among St. Louis prospects. It’s not known yet whether Love will start or pitch in relief. Peoria was rained out on opening night.

Ike Freeman (East Rowan, UNC) opened the season with the Columbus Clippers, the Triple A team of the Cleveland Guardians.

Colton Laws (Carson, Charlotte 49ers) is with Vancouver, the high A team of the Toronto Blue Jays. Laws is 26 now and has had several injury setbacks, but he’s 6-foot-7 and he throws strikes. He was good in the four games he pitched last season.

The Kannapolis Cannon Ballers won 6-5 in 13 innings against Fayetteville as they got the season started on Friday with a marathon that lasted 3 hours, 52 minutes.

A bases-loaded walk decided it.

DJ Gladney homered for Kannapolis.  Victor Torres had a double and a triple.

UNC freshman Vance Honeycutt (Salisbury) has slowed down some, but he’s still leading the Tar Heels in runs scored (33) and stolen bases (20 in 22 attempts).

A host of Rowan County players have helped Caldwell Tech (27-7) achieve a No. 3 ranking nationally among D-III junior colleges.

Cole Hales (Carson) has been the standout. Hales is batting .321 with 27 RBIs and 40 runs scored. He’s stolen 25 bases to rank among the national leaders in that category.

Stephen Smith (West Rowan) is also helping as a two-way player. He’s hit three homers and is 2-0 on the mound with two saves.

Wake Tech’s Wayne Mize (East Rowan) is still slugging. Mize is batting .328 in 35 games. He has four homers and 24 RBIs.

Bryson Wagner (East Rowan) is pitching for Wake Tech, which competes at the D-II junior college level, and has an 8-1 record. His walk totals are high, but so are his strikeout numbers.

Logan Rogers, who will be at Catawba next season, slugged his fifth homer for Whiteville’s Southeastern Community College on Saturday. Rogers is batting over .300 and entered Saturday’s play with 26 RBIs and a .304 batting average.

In the NCHSAA RPI rankings for 3A West, Central Cabarrus is fourth, West Rowan is eighth, Carson is 15th, East Rowan is 16th, and South Rowan is 28th.

Arabelle Shulenberger and Carmen Freeze held the Spiders to one hit.

Carson picked up a 15-3 South Piedmont Conference win against Concord on Friday.

Makayla Johnson made a rare appearance in the circle and pitched a one-hitter in the five-inning game.

Johnson had two hits and two RBIs for the Cougars (8-7, 6-2), while Catawba recruit Allie Burns scored two and drove in two.

Kynlee Dextraze had two of South Rowan’s three hits in an 11-0, five-inning loss to Central Cabarrus on Friday.

Central stayed unbeaten in the league and is one game ahead of West Rowan and two up on Carson.

Lexie Ritchie had the other South hit.

Avery Crowell did the pitching for the Raiders.

Davie (10-5, 8-1) is in second place in the Central Piedmont Conference behind East Forsyth.

A.L. Brown slugged its way to a 15-9 win against Cox Mill on Friday in Greater Metro Conference action.

Yow, Shyla Campbell and Lindsay Wolford had three hits each.

Avery Bracewell was the winning pitcher.

Salisbury hammered Thomasville 16-1 and 18-2 in a Central Carolina Conference doubleheader on Friday.

Caroline Cozart was 6-for-6 with two doubles and four RBIs in the doubleheader.

Katie Peeler pitched a no-hitter in the opener and struck out eight.

In the second game, Peeler hit another homer. Yang had two doubles. Mallory Link had a double.

Catawba’s softball team lost 8-2 at Newberry on Saturday in the first game of a South Atlantic Conference doubleheader.

Kary Hales (Carson) and Bailey Benton had RBI singles for an early 2-0 lead, but the Indians couldn’t hold it.

Hales had two hits and three RBIs and provided some good relief work in the circle.