$300,000 in incentives granted to five projects that will invest $9 million in downtown Salisbury 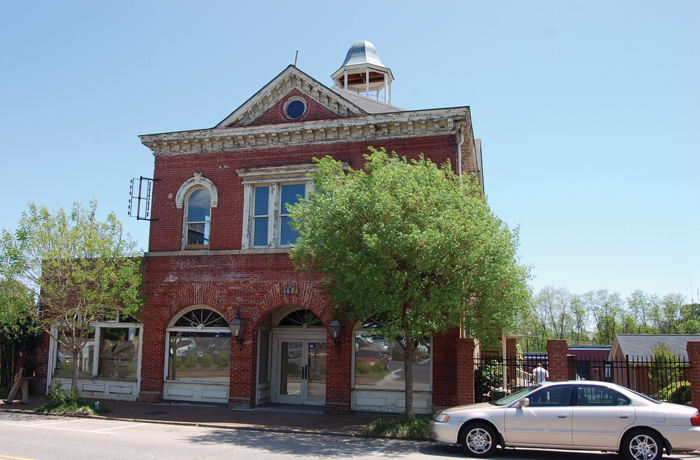 Grants worth $47,000 are going to help put in apartments and a restaurant at the old firehouse at 117 South Lee St. Salisbury Post file photo

SALISBURY — Five downtown projects were granted $300,000 in incentive grants from the city this week for an estimated total investment of $9 million once completed.

City Council members agreed to fund the projects from its Downtown Revitalization Incentive grant program, which was established in 2014 to stimulate private investment and promote economic growth and historic revitalization in the downtown municipal district.

In 2019, city council members paused the issuing of the grants to further study their impact before approving revisions in November. The incentives  consist of three competitive matching sub-grant programs targeting building rehabilitation, residential creation and fire suppression grants. None of the five projects awarded Tuesday qualified for the fire suppression grant.

Planning Director Hannah Jacobson said such grants help developers with obstacles often faced when rehabilitating aging infrastructure. Since 2014, more than 10 projects have used these grants to invest $12.5 million into downtown. Among those projects is the renovation and expansion of Salty Caper Pizza on Lee Street, updated heating and air conditioning at the Meroney Theater and the relocation of Barnhardt Jewelers from Spencer.

Jacobson said the potential $9 million investment from this round of projects is larger than past years. Contracts outline timeline requirements for the projects, which must begin construction within a year and be completed within two years. However, the ongoing construction challenges may allow for some flexibility on the completion date.

The following projects were awarded:

Applicant Lloyd Nickerson was granted $18,500 for his project at 106 W. Innes St. to construct two residential apartments, renovate the second floor and install new windows. One apartment will be a one-bedroom and the other a studio. Nickerson said the space was transformed into office space in the 1990s, but apartments would be a better use due to the lack of interest for the office space. He’s currently speaking with tenants and anticipates opening the apartments by the end of the summer.

It’s estimated the project will invest $239,238 to downtown, generating $17,198 in city tax revenue and $4,206 in municipal services district tax revenue over 10 years. The review committee noted they wanted to continue encouraging smaller scale redevelopment projects like this.

Applicant Todd Littleton was granted $47,500 for the construction of two apartments and a restaurant at 117 South Lee St. The two apartments will be short-term rentals for companies like Airbnb and he expects them to be completed within 12 months.

It’s estimated the project will invest $580,000, generating $36,555 in city taxes and $8,940 in MSD taxes across 10 years. The review committee noted the historic significance and integrity of the building, especially the distinctive cupola located on top. Additionally, Littleton said the project will help keep the momentum of transforming the 100 block of South Lee Street into a livable, mixed use block.

Applicant Josh Barnhardt was granted $62,000 for his project at 121 W. Council St. That project will create 12 new residential apartments and climate-controlled storage units. Some demolition work has been completed, with roof work underway. The project has already been awarded a $150,000 federal Paul Bruhn Historic Revitalization Grant and a $5,000 Innes Street façade grant for cleaning the exterior limestone. The committee noted it’s the only Art Deco-style building downtown and is the largest residential project in downtown in decades. Additionally, the elevator makes it more accessible.

The elevator is one reason the majority of potential tenants Barnhardt has spoken with are older adults. Barnhardt said there’s interest among the 65 and older population to downsize their space. He anticipates the first floor will be ready by the summer, with the second finished by the fall.

G2 Downtown Holdings, owned by Bill Greene, was awarded $91,500 for its project at 133 South Main St. Once complete, it will house seven new two-bedroom apartments and a renovated space for commercial business. Bell Block was also previously awarded a $150,000 Paul Bruhn grant, but the committee noted its close proximity to Bell Tower Green Park and the project’s installation of public art and electric vehicle charging stations.

It’s estimated to invest $2.4 million, with $172,704 in city taxes and $42,240 in MSD taxes generated over 10 years. Similar to Barnhardt’s tenants, Greene said there’s been a lot of interest among adults aged 55 and older. He anticipates units will be ready by February.

Applicant Kyna Grubb of Rowan Helping Ministries was awarded $80,500 for a transitional housing project at 317-319 East Liberty St. The project will create 12 new apartments for transitional housing, with nine of those units reserved for veterans. The historic rehabilitation of the Miller building at 317 East Liberty St. will accommodate administrative office space and a common area, while the adjacent building at 319 will house six units, laundry and storage space. The project will create a new building at the adjoining parcel that will include an additional six units.

It’s estimated that the project will invest $3 million, but no taxes will be generated since Rowan Helping Ministries is a nonprofit organization. The review committee noted its proximity to the Salisbury Depot, the good use of an otherwise difficult space, the installation of rooftop solar panels and for providing services for the community’s most vulnerable populations.

Grubb said she anticipates construction will begin this summer, and the project must be ready by September 2023.

The grants have a scoring rubric that considers factors such as the visibility and impact based on the development’s location, the grant-to-investment ratio, the number of restaurant, retail or entertainment spaces created, the level of contribution to the historic district, the number of residential units being created or rehabilitated and overall affordability for residents. In total, the five projects requested $560,000.