State approval is next step for Stanback Forest expansion 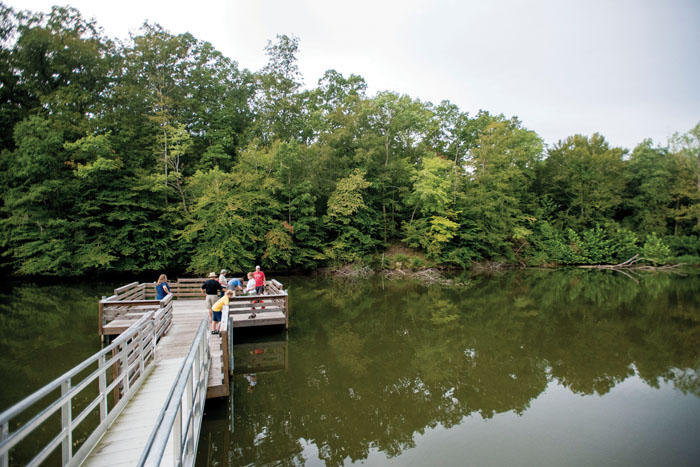 JON C. LAKEY/SALISBURY POST The Fred and Alice Stanback Educational Forest in Spencer is getting more than 50 additional acres.

SALISBURY — Three Rivers Land Trust is awaiting state approval so it can transfer a piece of land that will  more than double the size of the Fred and Alice Stanback Educational Forest.

The expansion will add more than 50 acres to the 42-acre property owned by the Town of Spencer.

The project was first announced by Three Rivers in November 2019 along with funding to acquire the property from Wallace Realty. The money came from the Duke Energy Foundation, the N.C. Land and Water Fund and a private donation.

Three Rivers Executive Director Travis Morehead said the state fund has a long list of items to perform checks on in order to close projects under its purview.

The trust closed its deal on the land in 2021. It will place the property under a permanent conservation easement before it is transferred to the town of Spencer to become part of the existing park.

The Wallaces also donated part of the property value to the project when the acquisition was made.

Morehead said there is no timeline but the goal is to close and transfer the project by the end of 2022.

Morehead said the trust hoped to have the project wrapped up sooner, but the trust is in the process of transferring more than 600 acres to public agencies in the region this year.

“We’re working all those transfers as hard as we can,” Morehead said.

He said COVID-19 has not impeded the trust’s work heavily but restrictions have affected state government for the past two years.

Morehead said not everything the trust does passes through state or federal governments.

When the property is transferred to the town it will be completely unimproved.

Morehead said generally the easements required by the Land and Water Fund are trail-friendly.

In 2021, Spencer was awarded $10,000 by the Blanche and Julian Robertson Foundation to help pay for trail construction in the expansion.

The town plans to work with the nonprofit Conservation Corps of North Carolina to build the trails in the new section of the park. The organization worked with the town earlier in 2021 to improve existing primitive trails in the park.

The original park was preserved in 2009 by the predecessor to Three Rivers in response to a plan to log the property for the owner to recoup cash in the wake of the Great Recession.

It was set up as a passive park with some trails and parking to preserve its natural elements.