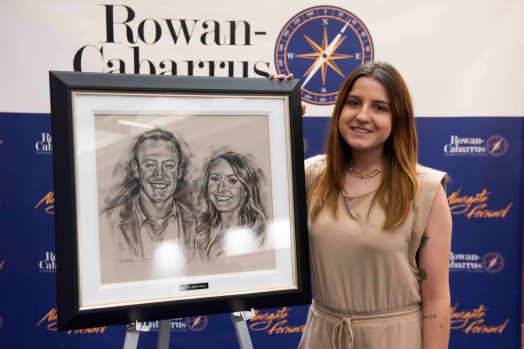 Submitted photo - Mira White with a portrait of Daniel and Kenzie Hemric. White is the recipient of a scholarship in Daniel's name. 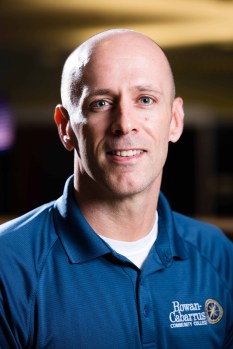 SALISBURY – Isaac Mayle has always been interested in technology, but it took him a long time to get back into school.

He struggled with mental health issues growing up, but he watched a lot of NASA TV and one day he watched an astronaut talk about starting his education by attending a community college, eventually earning a doctorate and going to space.

He enrolled in Rowan-Cabarrus Community College with the goal to eventually become a race engineer. Higher education has paid off for Mayle so far.

In 2019, he was selected for an on-site experience at the Kennedy Space Center, he spoke during his graduation from RCCC in 2020 and now he is a prestigious Goodnight Scholar student with a full ride to N.C. State University to study engineering.

He is on the Pack Motorsports formula team at the university. Now he says being a race engineer is still on the table, but his interest in technology is broad.

“I love cars, I love space and I love technology,” Mayle said. “As long as I can get into some sort of field that I enjoy, I’ll be happy.”

He is looking at possible internship opportunities in aerospace, racing and material manufacturing.

Mayle said he feels his courses at RCCC were just as good quality as those he is taking at N.C. State, and he said he was happy to work with the community college as an ambassador to get its bond referendum passed in 2020.

Mayle is one of a handful of RCCC graduates and students the Post talked to about their stories for Community College Month. Here are some of their stories:

• Mira White is a welding student at the college. She is a finalist for the college’s excellence award and an awardee of the Be the Change scholarship sponsored by NASCAR star and Kannapolis native Daniel Hemric.

White acknowledged welding is a male dominated field and feels that pressure sometimes as a woman in the program, but but that does not stop her.

• Ayanna Leach graduated from the occupational therapy assistant program with her mother in 2019. She now works with local kids.

She credited the college for fitting into her schedule and budget as a mother of two, as well as helping her finish her program with a finish line grant. She said the college was always there for her as she was trying to finish her degree.

“Just the support I have from our director, all of our educators, even advisors, anybody, anytime you need any kind of help,” Leach said.

• Ashli Blake, a graduate of the cosmetology program, now has her own barber shop in Salisbury called Above the Collar.

Blake is specializes in men’s haircuts. She used to work in management at a barbershop chain and struck out on her own. When she got into cosmetology she was interested in women’s hair but found after starting to work with men she built up a clientele and found she enjoyed it more.

“I just like to make people feel good about themselves,” Blake said.

Two of her stylists also graduated from RCCC. She said starting her own business shortly before the COVID-19 pandemic began was difficult, but she got a contract cutting hair for the National Guard that helped keep her afloat while her shop was closed.