Fishing: Lander commit McCall is hooked on the sport 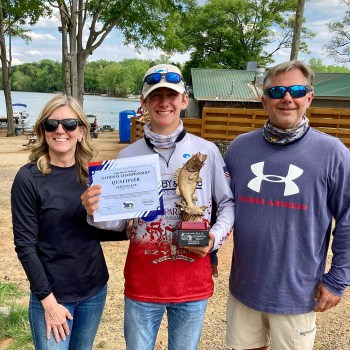 Harrison McCall is seen with his mom, Lee, who serves as manager/agent and dad Barry. Submitted photo 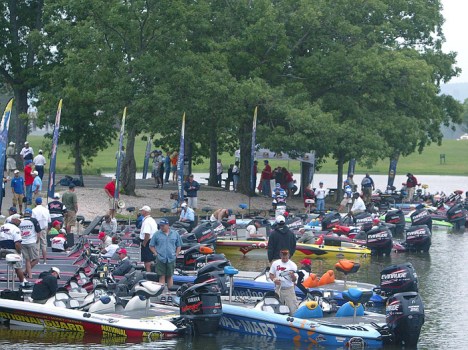 Submitted photo Serious fishing tournaments draw big names to the lakes, and Harrison McCall has been able to line up local sponsors for his events. ‘Those sponsors have been huge, paying for gas, paying those entry fees,’ he says. 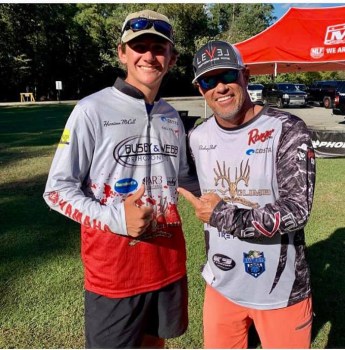 Submitted photo — Harrison McCall, left, is a junior at Carson and has committed to accept a fishing scholarship from Lander University.

CHINA GROVE — Harrison McCall was 6 or 7 when he caught his first bass from a boat.

The venue was Lake Norman. The lure he used was a “Shaky Head.”

“That first catch was made fishing with my dad (Barry),” McCall said. “I’ve never forgotten the way that first one felt. Fishing definitely hooked me for life — and there’s no pun intended.”

McCall has gone on to much bigger and better things in the fishing world. His lengthy list of wins and high placements in local, regional and even national fishing tournaments would take an hour to read through.

A junior at Carson, McCall is so proficient  at the sport that he has committed to accept a fishing scholarship from Lander University in Greenwood, S.C., a school that is something of a powerhouse in the bass fishing college ranks. Lander boasts a coed fishing roster of 38 men and women and has not only a head coach, but a director of bass fishing operations.

The NCAA is not involved in bass fishing. That means some advantages for fishing schools. Lander fishermen can have sponsors. They can represent and advertise a company. They can receive free gear and they can win substantial prize money in tournaments.

“Lander is one of maybe 15 or 20 colleges that offer fishing scholarships,” McCall said. “But there are a ton of schools like UNC and N.C. State that have very competitive bass fishing club teams. In some of the big college tournaments, there are 250 boats on the water. It’s a growing sport.”

McCall said he was contacted about catching bass for Lander by head coach Drew Pridgen.

McCall’s official visit was basically a perfect day of summer fishing with Pridgen on Lake Greenwood, near the Lander campus.

“He’d been following my career and he said he liked that I didn’t act like a fool on social media,” McCall said. “He offered me a scholarship that day. I loved the school when I went down there during the summer months, but I still wanted to see what it was like when all the students were in session, so I visited again about a month ago. I loved it even more, and that’s when I committed. Basically, Lander can do everything for a bass fishing student that they can for someone on a baseball scholarship, things like free tutoring.”

McCall is an excellent student. He figures that the bass fishing scholarship combined with academic scholarships is going to equal something very close to a free education.

And that’s the dream for all students and parents.

“I was excited and I was relieved to get that offer,” McCall said. “My parents are excited and relieved and I know they’re proud. I’m thankful for them. My dad has driven me all over the place to tournaments for years and he drove the boat when I was getting started. My mom (Lee) has been my manager and she’s been like an agent, lining up all kinds of local sponsors for me. Those sponsors have been huge, paying for gas, paying those entry fees.”

Serious fishing for McCall can be traced back to the 2017-18 school year. He won a Junior Bassmaster Tournament on Lake Norman. McCall and fishing partner Will Webb, now a standout athlete at Salisbury High, won the North Carolina Middle School state championship on Lake Norman and qualified for the national event.

McCall was still in middle school at Salisbury Academy in 2018-19, when he won several local tournaments. He was able to compete at the high school level that year because he had a sophomore fishing partner in Carson Palmer of Richfield. They placed second in the Student Angler Federation High School Fishing State Championship and they won the Major League Fishing State Championship.

The duo competed in the FLW (Fishing League Worldwide) National Championship Qualifier on Pickwick Lake in Alabama. In some ways, that was the key tournament in McCall’s life.

“Two-day national tournament, 400 boats, and we’re fifth after that first day (with three bass: weighing 12 pounds, 13 ounces),” McCall said. “Then we went out and got zeroed on the second day. I didn’t handle the nerves. I let the pressure get to me that day, but I learned from it. That’s the last time I let nerves get the best of me in a fishing tournament.”

The 2019-20 season brought more victories for McCall and a trip to Wisconsin to compete in another FLW High School National Championship Qualifier.

There was another SAF High School State Championship in 2020-21. That win came on High Rock Lake.

McCall competed for a time in the North Carolina Bassmaster High School series, but he made a decision to move on to compete in the Phoenix Bass Fishing League, which offered opportunities to win greater prize money.

Now he competes on the Phoenix circuit and is out on the lake as an individual.

Phoenix is big business. Boaters can win $10,000 in cash and prizes for local events, They can land $60,000 for regional championships and up to $100,000 for national victories.

Last October, competing in Prosperity, S.C., on Lake Murray in the Southeast Regional Championship, McCall caught six bass, weighing 15 pounds, 9 ounces, and placed fifth out of 168 boats. He won $1,000 and qualified for the Phoenix All-American Tournament that will be held in early June on Lake Hamilton in Hot Springs, Ark. That will be his next major event.

McCall played a lot of baseball as a youngster, competed on some high-powered travel programs, but the sports he wound up loving the most are golf and fishing.

“There are similarities between golf and fishing,” McCall said. “Both sports are about 75 percent mental. Maybe 25 percent of fishing is technique, being able to cast well and that sort of thing, but a lot more of fishing is the mental game.”

McCall is a fine golfer for Carson. He shoots in the low 40s for nine holes most days, but he’s also carded a 37 this season in South Piedmont Conference play.

He’s a well-rounded junior. He’s a volunteer for Special Olympics and for the North Carolina Board of Elections. He’s active in the church and as a photographer.

But it’s fishing that has hooked McCall for life.

“The only way to become better at fishing is time spent on the water,” McCall said. “You learn something new every time you fish. My dad tells me to try to get 1 percent better every time I go out there.”

His track record indicates that he’s doing just that.

McCall says he got bored with the repetitions required to be a successful baseball player, but every day on the lake offers something new.

“No two days are alike when you’re fishing,” he said. “Rain or sunshine — or both. Water clarity can be very different. The wind might be blowing hard or it might be calm. Trying to catch fish, you’re always thinking. Every day on the water is a brand new puzzle, and your job is to try to solve it.”