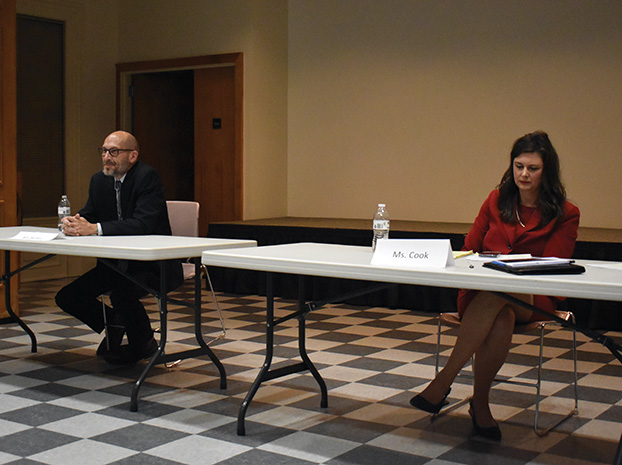 Paxton Butler is challenging incumbent District Attorney Brandy Cook in the primary election. Early voting starts on April 28 and the primary is on May 17.

Cook is seeking a fourth term after being elected as the county’s first female district attorney in 2010 and winning re-election in 2014 and 2018. Butler worked as an assistant district attorney under Cook for several years, but says he left earlier this year because he wasn’t happy with the office’s inability to stop crime in the community.

Debate unfolded after moderator Ted Blanton, a retired lawyer and previous district judge, asked each candidate to describe the presence of crime in the community over the past 15 years.

Cook highlighted historically low crime rates in 2019 and 2020 while also recognizing that crime rose again in 2021. Cook said she’d work to reverse that trend again by continuing to utilize Project Safe Neighborhoods, a federal initiative with a “proven track record” that seeks to stop previously convicted individuals from reoffending by threatening them with a lengthy federal prison sentence. Cook also said she’d like to reduce gang-related violence through an already-established task force. She highlighted the new tools Salisbury Police Department uses to fight crime as well.

Butler said he’s concerned that Salisbury has earned the moniker “Shotsbury” due to “out of control” gun violence. He criticized the county’s participation in Project Safe Neighborhoods for slowing down the judicial process.

“Here’s the reality of that: those cases get charged on a local level and sit in our courts for better than a year while we’re waiting on (Cook) and the feds to decide what to do with it,” Butler said.

Butler said he’d prosecute defenders aggressively in Rowan County first and then allow them to be prosecuted further on the federal level.

“If we do that, we’ll send a message here in the community,” Butler said.

The forum shifted next to the current state of the Rowan County court system. Butler criticized Cook’s office for being a “revolving door of talented prosecutors” and critiqued the lack of experience among the office’s current assistant district attorneys. Cook fought back against those claims, saying the office has 130 years of combined prosecutorial experience.

Cook rebutted by saying she likes to “look at a bigger picture,” which shows her office has a 91% conviction rate on violent cases over the past 10 years. Butler said he was responsible for helping the district attorney’s office achieve that high conviction rate because of the cases he prosecuted during his time working for Cook. Cook also said her office had multiple jury trials ready to go before the COVID-19 pandemic brought everything to a halt.

When the candidates were asked how many murder defendants are awaiting trial and how many have been tried in the last couple of years, Cook said her office tried seven defendants for murder in 2019, a “substantial feat for a small office like ours.” Cook said her office tried two last year and has one scheduled for September and will likely have another scheduled for August.

The debate then turned to probable cause court. Cook said the court is a place to resolve low-level felonies that don’t have to go to Superior Court, allowing her office to focus on more serious cases. Cook said they resolved approximately 538 cases in 242 days in 2019 and 2020.

“We are utilizing that courtroom,” Cook said.

The moderator steered the forum to the topic of scheduling cases. Butler once again attacked Cook’s office by saying calendering has been “sloppy” and asserted that previously dismissed cases have been set on the calendar. He said he’d restructure the district attorney’s office by adding a second assistant district attorney to district court on a daily basis. He also said he’d single out individuals who need to be prosecuted immediately for serious crimes and prioritize those cases.

Cook said her office moves cases along in a timely manner while also communicating with multiple parties. She mentioned that court calendaring was disrupted by the COVID-19 pandemic because they tried to reduce the amount of people coming into the courtroom.

The discussion about court scheduling transitioned to debate about the current backlog of cases. Cook said she couldn’t provide the exact number of cases that are on the waiting list, but once again said her office couldn’t move forward with jury trials for a year because of the pandemic.

She noted that her office worked to authorize two sessions of court to expeditiously dispose of driving while intoxicated cases that piled up during the pandemic. Cook said those sessions led to many offenders pleading guilty.

Cook said her office has been able to work through the backlog since jury trials have resumed.

Butler couldn’t provide exact numbers on the backlog of cases either because he’s not privy to those numbers, but he called the backlog “as bad as it’s ever been” and that cases are “as old as ever.”

“If you ask any attorney in this town that practices criminal law, they’ll tell you the same thing,” Butler said.

He said he’d cut down on that backlog with a “far-reaching approach.” If elected, Butler said he’d revoke plea offers in the county, identify certain individuals charged with serious crimes, including murder and sex offenses, and put them on trial if they don’t plead guilty.

Cook and Butler disagreed yet again on deferred prosecution — the practice of giving first-time, low-level offenders a chance to have their charges dismissed after completing probation, community service or restitution. Butler said deferred prosecution is underutilized and heralded it as a practice that can break the cycle of career criminals and prevent there from being more and more criminals in the community.

Cook said she is willing to give folks a chance, but compared deferred prosecution to giving offenders a slap on the wrist. She said it doesn’t help the victims of the crime.

“If someone breaks into your home, your business, their case gets dismissed,” Cook said. “No record of it.”

In the hour before Cook and Butler debated, the two candidates for Clerk of Court answered questions about how they would oversee the clerical and record-keeping functions of the Rowan County courthouse.

Rebecca Saleeby and Todd Wyrick are running against one another for the position, which has been held by retiring Clerk of Court Jeff Barger. Saleeby started her judicial career as a deputy clerk of Superior Court before becoming a Rowan County magistrate. She went on to work for the North Carolina Administrative Office of the Courts as a business system analyst supervisor while also teaching at Rowan-Cabarrus Community College.

The two candidates agreed often during the forum. Both said they’d hire employees who are knowledgeable about the law and have strong people skills since they work with members of the general public every day. Wyrick said he’d like to bring more diversity to the clerk’s office, including employees who are bilingual. Saleeby said she’d put an emphasis on cross training employees in the office to ensure they can answer any and all questions and fill in for one another if needed.

Both said ensuring accessibility of public records is paramount to the position. Saleeby said she’d like to implement an online system that makes it easier for people to access or request records without having to visit the courthouse.

Wyrick said he’d like to advocate for funding and support from the county for more storage space for files.