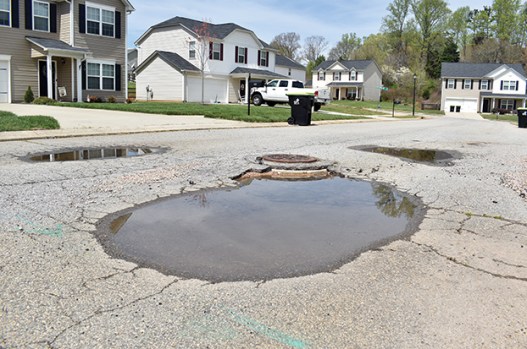 The streets in Miller's Grove are marked by potholes filled with standing water in several places. Ben Stansell/Salisbury Post 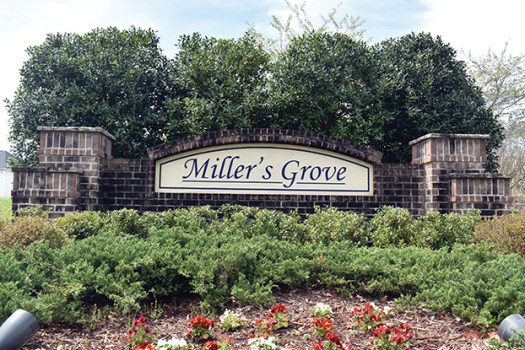 The town of China Grove is poised to take legal action against a developer to compel the company to fix steets in the Miller's Grove neighborhood. The town contends that the developer didn't properly install the roads or complete them. Ben Stansell/Salisbury Post

The town of China Grove is seeking to have those faults fixed by taking legal action against the developer it says failed to construct the roads properly.

The China Grove Town Council on Tuesday night passed a resolution authorizing civil litigation against China Grove 152, LLC, the company that built infrastructure for the first two phases of Miller’s Grove, a neighborhood located on U.S. 152. The resolution states that the town is filing for “monetary damages, injunctive relief, equitable remedies and such other legal actions as may be deemed appropriate.”

“I hope that the people of Miller’s Grove realize the town of China Grove is going to get (the roads) fixed, even if it requires legal action,” Mayor Charles Seaford told the Post last week.

Planning for Miller’s Grove started in 2006 and infrastructure for phases 1A and 1B was installed around that same time, according to Assistant Town Manager Franklin Gover. With only a few homes built, the recession brought a halt to construction in the neighborhood. Construction recommenced in 2016 when Wade Jurney Homes built out the first two phases, which now include 66 houses. Shea Homes was the company initially involved in building houses in the neighborhood.

As the homes in phases 1A and 1B were going up, Gover said the town requested that China Grove 152 finish constructing and certifying the streets within those phases. That never happened, Gover said, and over time the streets have continued to worsen.

“After a decade of standing water, the existing partially completed streets are in poor condition with cracks and potholes,” Gover told the Post.

Town Attorney Tom Brooke said the town has continually asked China Grove 152 to fix the streets, but those requests have not spurred the company into action.

The owner of China Grove 152 could not be reached for comment on this story.

The town tasked SEPI Engineering with conducting an analysis of the streets and prescribing a repair. The engineering firm determined the streets were not installed to the correct specifications and that patching and repairs will not bring the streets up to town standards. Brooke said more than an inch of asphalt is missing from the streets. SEPI’s prescribed repair is called “full-depth reclamation,” a process the town estimates will cost almost $400,000.

In September, the town issued a notice of violation to China Grove 152, imposing civil penalties in the amount of $200 per day in addition to the forfeiture of $197,857 of the company’s money held in escrow by the town pending the completion of the streets. Brooke said the developer has not appealed the notice or taken action to remedy the situation.

“It’s obvious they’re not going to do it without some sort of court action,” Brooke said.

The resolution passed on Tuesday night by the Town Council authorizes Brooke to file legal action in Rowan County Superior Court against the developer for damages and injunctive relief.

This wouldn’t be the first time the town and China Grove 152 meet in court.

In 2015, a North Carolina Court of Appeals ruled that the town had to return $54,284 to the company after deeming the “impact fee” paid to the town by China Grove 152 in 2008 was illegal. An impact fee is essentially a charge assessed on development to fund current and future public infrastructure expenditures that could be necessitated by the development. North Carolina courts have struck down impact fees imposed by municipalities in several cases. Brooke said the previous ruling has no bearing on the town’s impending legal action against China Grove 152.

Brooke anticipates filing against China Grove 152 this month. He said the company will then have 30 days to respond in some way or ask for an extension. From there, he anticipates a mediation to be scheduled.

As the town attempts to work through street issues in the first two phases, Nest Homes is developing the third phase of Miller’s Grove in conjunction with Express Homes, a division of national builder DR Horton. China Grove 152 is not involved in the development of the third phase. Gover said there are no issues with the streets in the newest phase and that the town has an inspector monitoring the development to avoid any issues.