Republicans running for Board of Commissioners talk incentives, experience, education at forum 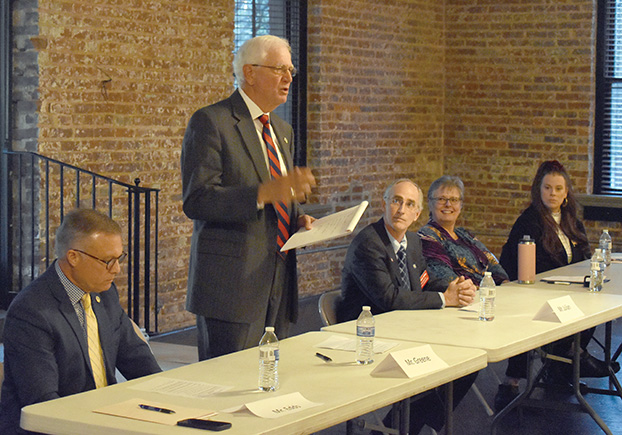 SALISBURY — Rising from his seat and walking closer to the crowd gathered in the Heritage Room in downtown Salisbury, Greg Edds on Tuesday night passionately defended the tax incentives the Rowan County Board of Commissioners has approved to spur economic growth in the county.

Edds was answering a question posed to all five Republican candidates for the board who are on the ballot in the upcoming primary, but he was specifically responding to criticism of those incentives levied by challenger Angie Spillman in what was one of the liveliest moments of the spirited forum.

Spillman and fellow challenger Michael Julian are running against incumbents Edds, Jim Greene and Judy Klusman, who are campaigning on a unified platform and are each seeking a third consecutive term on the board. Edds is the current chair of the board and Greene is the vice chair. Alisha-Byrd Clark, who currently sits on the Rowan-Salisbury Schools Board of Education, and Sam Post, owner of PhenomWell CBD Store, are running as Democrats and therefore were not involved in the forum.

Question: “What is your current job or background and how has that experience prepared you to lead Rowan County as a commissioner?”

Edds, a local State Farm agent, said his career selling insurance has prepared him as a leader because he’s learned how to differentiate his product from other companies. He also mentioned being listed among the company’s top-50 agents in the country several times.

“I know what success looks like and I know how to bring success to organizations, businesses and communities,” Edds said.

Greene said his career as an independent insurance agent has helped him learn how to get the best contracts for his clients, which he said has helped him get the best economic deals for the citizens of Rowan County while working with Rowan Economic Development Council.

Julian said his experience as shipping manager at Packaging Corporation of America has taught him how to effectively manage a budget and lead employees. He also mentioned his experience as a small business owner as an asset that would help him as a commissioner.

Klusman said her seven years of experience as a commissioner has prepared her for another term. She also highlighted her experience overseeing a multi-billion budget in the Wisconsin state legislature, as well as her experience managing the budget of her family’s dairy farm as a young adult.

Spillman, a contractor, said she is qualified to be a commissioner because she’s learned from the “failed policies” of the current Board of Commissioners. Spillman said her formal education, including her current pursuit of a Ph.D. in public policy, would help her if elected.

Question: “What is the No. 1 issue you believe the county is facing today that you feel you are best equipped to solve?”

Spillman pointed to crime as the county’s most pressing issue and said her goal is to make the community safer. She plans to do that by creating a “county-wide civic organization” of guides to escort trained professional volunteers to assess homeless camps in the area and separate the homeless individuals into groups, at which point they will be relocated to group homes, retirement homes, jails or out of the county.

Klusman highlighted substance use as her top priority as she works toward reelection. Earlier this year, Klusman and other community healthcare leaders brought forward the idea of establishing a detox and treatment center to help those battling addiction. She said bringing that center to fruition would be one of her main goals if she is voted in for another term.

Julian agreed that crime and substance use are both major problems, but said a “lack of education” within the school system is the chief problem in Rowan County. The RSS Board of Education has influence over school policies in the district, but the Rowan County Board of Commissioners does provide the district with funding and can assume debt for major capital projects and physical improvements. Julian said something needs to be done to increase test scores in the county’s schools.

To Greene, the main problem the county will need to address in the near future is managing “unprecedented” growth heading its way. Greene said he’d like to bring in new jobs and promote economic development while maintaining Rowan County’s “flavor,” which he said is its mix of urban and natural landscapes.

While Edds spent time defending the board’s crime reduction track record — specifically mentioning that the board has “never said no” to the sheriff — he agreed with Julian that education is the top priority. He said he’d like to see a better vertical alignment between the county’s K-12 schools, Rowan-Cabarrus Community College and Catawba and Livingstone colleges.

Question: “What is your role in collaborating with Rowan-Salisbury School System and local colleges to better prepare graduates for employment and well-paying technical vocations and careers?”

Greene echoed Edds by speaking more about the work of the education collaborative, but also mentioned the Better Jobs, Better Lives program at RCCC that is funded by the county and teaches continuing education courses to help the “unemployed and underemployed.”

Julian said he would push to strengthen the school system’s career and technical education offerings for students who have no interest in college but need a skill to make a living. Julian said a high school completely dedicated to career and technical education would be ideal; although, he’s not sure if the funding would be available to make that a reality.

Klusman mentioned her involvement with Smart Start Rowan’s efforts to support early childhood education and encouraged parents to be involved in local schools by volunteering and reading to young children.

Spillman criticized the current Board of Commissioners for not standing up to local and state COVID-19 health and safety guidelines such as mask mandates. While commissioners don’t set school policy, she said the “buck stops with you” because of the board’s influence over the school system’s finances. Spillman also critiqued remote learning and said schools should stop teaching students to become “Marxists.”

Question: “What is your position on economic development and how incentives may be used to attract potential employers to expand and locate in Rowan County?”

Spillman said she disagrees with giving tax incentives to companies and compared the deals to selling “false dreams.” She went on to say that businesses brought to the county will leave once the terms of the incentive agreements are over.

“I think we’re going wrong with all the incentives and how we’re selling Rowan County out for an industry,” Spillman said.

Klusman said she’d like to do away with incentives, but acknowledged that they are critical to spurring business development, which is critical to having a strong tax base that allows the county to support education and other initiatives.

Julian said he’s concerned that companies like Macy’s — which recently announced plans to locate an e-commerce fulfillment center in China Grove — will “pack up and move to the next state or the next county” once the terms of their incentive deals are over. But Julian said giving out incentives is the “game we have to play” to get businesses to move to Rowan County.

Greene said the county could revert to not giving out incentives. That would result in taxes increasing, Greene said, because the tax base would be lower.

“We have grown this tax base through incentives by millions and millions of dollars in the last eight years and that’s the way this county is growing,” Greene said.

Edds relied on numbers to make his case for why he, Klusman and Greene have supported economic incentives. He used the incentive agreement the county is giving to Macy’s as an example. The county will return 80% of new taxes paid by Macy’s over 15 years.

“Here’s the return: 2,800 full-time jobs, an additional 2,600 part-time and seasonal jobs and the payroll that will be dumped into Rowan County by Macy’s will be $100 million per year,” Edds said. “After they dump $100 million a year into our economy, people have money in their hands.”

Edds said that money will be infused in the local economy when people use it to buy goods and services.

“People have money to spend and you know what that does?” Edds said. “It creates more jobs.”

The Rowan County Republican Party will host a forum for clerk of court and district attorney candidates tonight at 6:30 p.m. in the Stanback Auditorium of the Rowan Public Library main branch. Clerk of court candidates Rebecca Saleeby and Todd Wyrick will go first followed by District Attorney Brandy Cook and challenger Paxton Butler at 7:30 p.m.