New and returning summer camp programs on the horizon 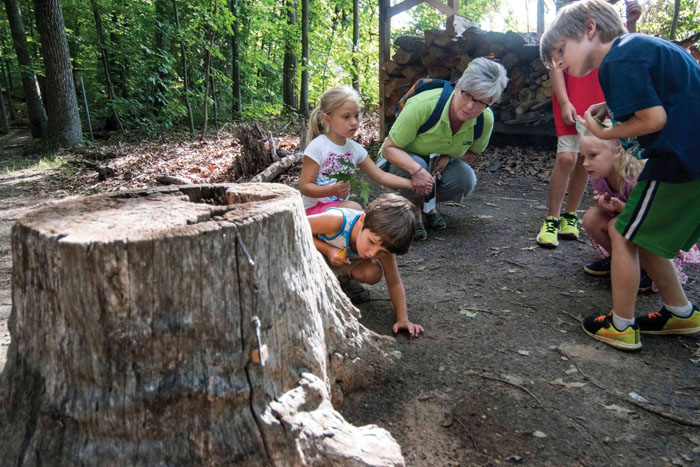 Amy Pruitt leads a group on a hike around the Old Setzer Schoolhouse during an earlier camp for rising kindergartners and first-graders. Jon C. Lakey/Salisbury Post File Photo

SALISBURY — Some local summer camps are already open for registration and filling up.

Horizons Unlimited is hosting a week of activities for “Camp EcosySTEM,” with a mix of eco education, experiments, engineering, arts and crafts and more.

Rowan Wild at Dan Nicholas Park is hosting six camps with sessions from late May to early August.

Rowan Wild Educational Specialist Misty Parrish said, as of Tuesday, there are only openings in its junior naturalist and critter camps, but the others are already full. Parrish said it is typical for the wildlife camps to fill up quickly.

Rowan Wild is offering more camps than it did last year and it has expanded the number of sessions.

The Horizons camps are open to students ages 6-12 and students of similar ages will be grouped together. The number of camps at Horizons has been pared down this year, but the science center has added more programs as well.

This year, Horizons will offer field trips to other camps. Other programs can coordinate visits for activities like planetarium shows and meeting the center’s animals. Tellez said this happened to a limited degree in 2021 but the center did not advertise it.

Horizons will also be open to the public two Fridays each month in June and July. Families will be able to attend a planetarium show and hands-on science activities. Ticket information will be released closer to the summer.

Rowan-Salisbury Schools, which Horizons is a part of, will also be offering camps for specific student groups. The district will also host its regular summer school camps. Chief Academic Officer Jason Gardner said last year the specially expanded summer camps had the capacity to accept any middle school students, but this year the programs are all invite-only.

Several institutions offer full-day enrichment programs as well. Hurley YMCA will offer full weekday camps from May 31 through Aug. 5 with a different theme every week. The overall camp will be carnival themed this year.

The Saleeby-Fisher YMCA and the Corriher YMCA will offer similar programs this year as well.

Hurley YMCA Executive Director Richard Reinholz said the Y will not open registration until closer to the summer. He pointed to Charlotte as an area that fills up more quickly because of higher demand.

“We don’t traditionally see that at my branch,” Reinholz said.

He said one of his hopes is as the COVID-19 pandemic has slowed that restrictions stay low. He said the Y has no restrictions compared to a year ago.

Here are links for more information and registration in the summer programs mentioned in this story: