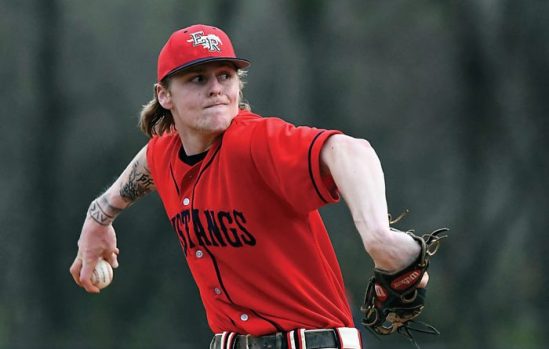 East pitcher Cameron Padgett sruck out nine Wednesday in the game against South. Photo by Wayne Hinshaw, for the Salisbury Post 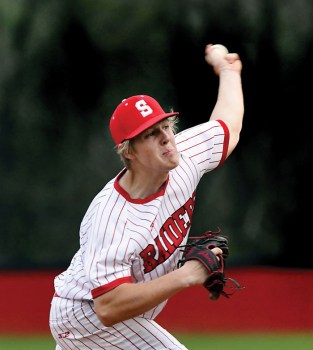 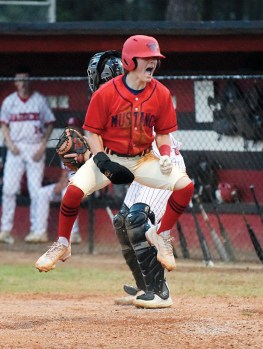 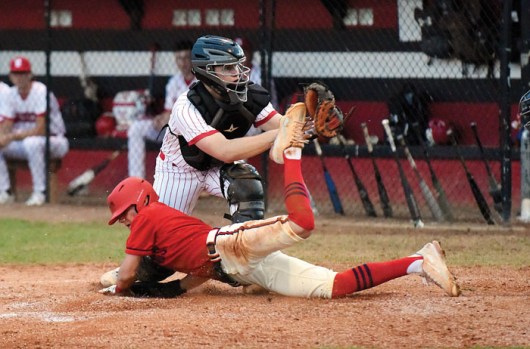 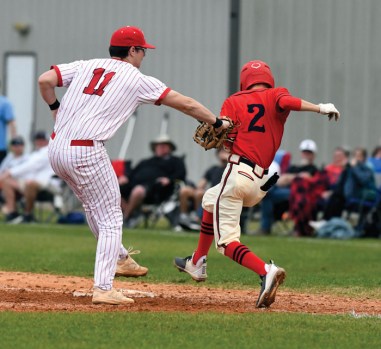 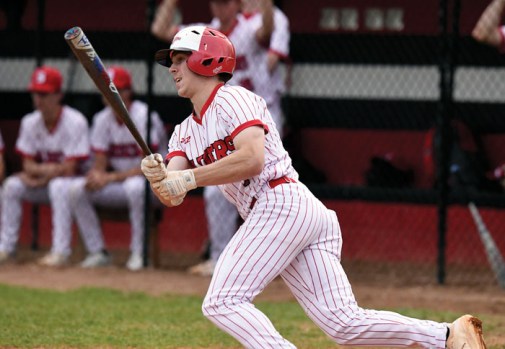 South's Nathan Chrismon had a two-run homer in Wednesday's victory. File photo by Wayne Hinshaw, for the Salisbury Post

LANDIS — East Rowan right-hander Cameron Padgett is no longer unscored upon, but he’s not worried about that because he is still undefeated.

Behind Padgett, a poised, strike-throwing senior who signed with UNC, the Mustangs handled South Rowan 6-1 on Wednesday and took over sole possession of first place in the South Piedmont Conference.

It was a much anticipated matchup. The successful programs had not squared off since 2017 when the Raiders beat the Mustangs twice in three meetings.

Padgett (6-0) struck out nine and walked none. For the season, he’s whiffed 68, while issuing seven free passes.

South (9-3, 6-1) scored the first run of 2022 against Padgett in the sixth when East Carolina signee Nathan Chrismon sprinted for a triple and Catawba-bound Ty Hubbard brought him home with an opposite-field double. The lefty-swinging Hubbard got enough of a tough pitch to slice it down the left-field line.

South sent junior Wake Forest commit Haiden Leffew to the mound to duel with Padgett. Leffew sat down the Mustangs for two innings, but things broke down for the Raiders in the top of the third. Leffew had to throw 34 pitches in the third, hitting a batter and walking two, and the Raiders made two errors. Logan Dyer scored on a wild pitch to put the Mustangs ahead. Then UNC commit Cobb Hightower, a sophomore, stole home. Hightower was ruled safe on a close play that was argued by South.

East stretched the lead to 4-0 in the top of the fourth, with Dyer and Hightower delivering back-to-back singles through the right side on hit-and-runs. Hightower’s single drove in a run. The Mustangs got another on a wild pitch.

East (13-1) continued to tack on against reliever Chandler Oddie. Hightower’s sac fly in the top of the sixth made it 5-0, although South got that run back on the extra-base hits by Chrismon and Hubbard.

East added its final tally in the seventh when Griffin Warden began the inning with an infield hit and eventually scored on a balk.

South had four hits, two by Chrismon. JD James had South’s first hit against Padgett, a crisp liner to right with one out in the second, but he was erased by a double play.

East’s offense was keyed by No. 8 batter Tristan Miller and Dyer, who was swinging in the No. 9 spot in the lineup as the DH.

Miller got on base three straight times with walks and HBPs, and the Mustangs used speedster Nate Hayworth as a courtesy runner for him.

Dyer went 3-for-3 behind Miller and set up Hightower for productive at-bats from the lead-off spot.

The defensive play of the game was made by Warden in center field for the first out of the fourth. South lead-off man Kane Kepley, a Liberty signee, ripped a shot, but Warden made the play at the fence.

With the loss, South fell into a tie for second place with surging West Rowan. The Falcons routed Concord 16-1 on Monday.

South and East will go at it again at 7 p.m. at Staton Field on Friday.