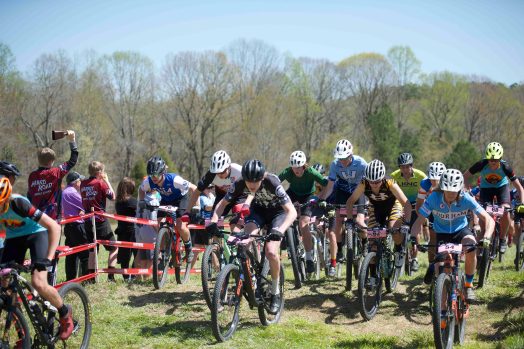 Carl Blankenship/Salisbury Post - A wave of racers in the high school boys division at the start line. 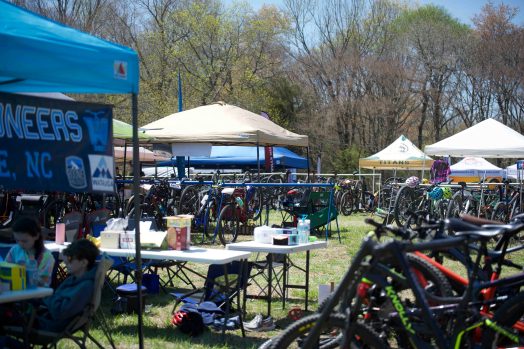 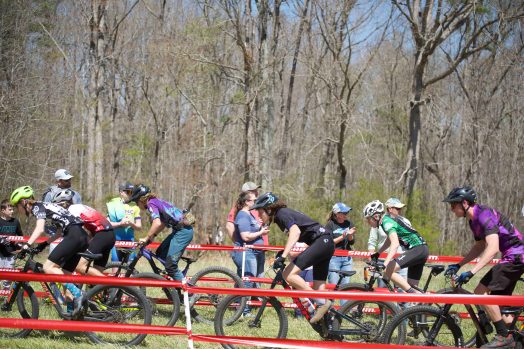 Carl Blankenship/Salisbury Post - More than 400 students registered to be part of the race. They came from the coast to the mountains in the state.

SALISBURY — The parking lots at Salisbury Community Park were filled with bike racks on Sunday for an event that drew young people from across the state.

This was the second race of the season for the N.C. Interscholastic Cycling League and the first of its kind held on the park’s trails.

More than 400 kids grades 6-12 raced on Sunday and league Race Director Todd Lester said they came from all over the state. There were teams from Boone to Wilmington with tents set up on the grounds. The event started on Saturday with setup, registration, course inspection and a mechanical clinic.

Sunday started early with setup and more course inspection before riders were staged and started off in waves. The length of the course varied by division. The youngest riders had shorter distances and high school upperclassmen had the longest rides.

Lester said the park was originally slated to host a race in 2020, but the COVID-19 pandemic put most of the league’s activities on hold. It held one race in early 2020 before widespread shutdowns became the norm.

In 2021, the organization held a “season of adventure” instead, promoting youth riding in different areas rather than holding formal races. Now the organization is returning to business-as-usual and Salisbury was the next stop. The league will hold state championships at the end of May.

“We’ve been here several times for a venue survey to see if it’s a feasible course for us to use,” Lestor said.

He said part of validating a venue is making sure it is beginner-friendly for younger or inexperienced racers.

Lestor complimented the facility, noting it provided enough real estate for the pit area and the space the league needs is growing with the popularity of the sport. He said the pandemic did not slow down interest in the sport, pointing out outdoor activities were some of the safest things people could do during the pandemic.

“Our numbers are on par with where we historically have been,” Lestor said. “I expect to see an explosion next year.”

Rowan has its own local mountain bike team called the Rowan Rockhounds.

Kara Maschi, a team member and 11th grade home school student, said she has been riding for four years and got into it through her brother.

“I really enjoy it,” Maschi said. “It’s something that I can work for and improve in, and a challenge sometimes.”

In 2019, she broke her pelvis after a bad accident and needed surgery. She said that experience has made her a bit more hesitant while riding but has not stopped her.

“I didn’t stop, I think just because I love it so much,” Maschi said.

Pedal Factory Executive and Director Rockhounds coach Mary Rosser said the event is an exciting first for the park. The Salisbury-based nonprofit is also now combining with the group that has been building the trails at the park.

Rosser said the partnership is very new, but it will give the trail-building effort benefits like the ability to pursue grant funding. She said the goal is to build more trails and get more volunteers involved.