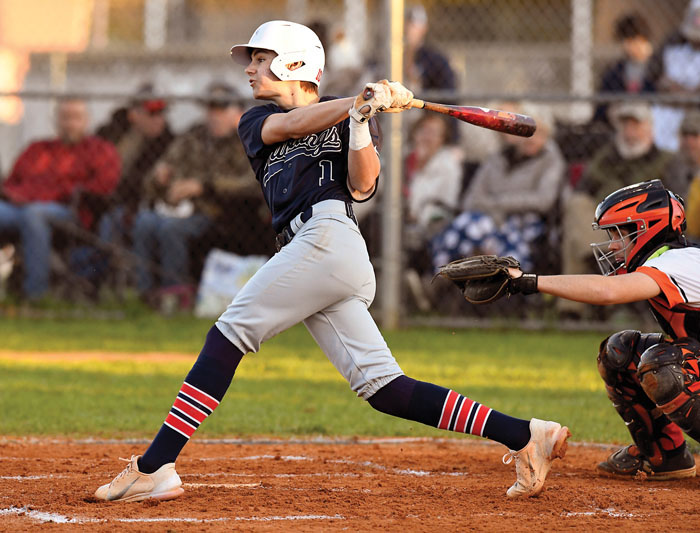 East Rowan’s Cobb Hightower gets a hit during a game against Carson earlier this season. Hightower has signed to play baseball at UNC. photo by Wayne Hinshaw, for the Salisbury Post

“I guess playing Tee-Ball games when I was 4 or 5,” Hightower said. “And I can remember us being up in Minnesota when one of my dad’s former teammates was living up there. I was hitting Wiffle Balls over the roof of the house. Everyone was amazed.”

Hightower always has been good for his age group. He still is. He recently made a commitment to the baseball program at UNC.

The Tar Heels have discovered a gold mine of baseball talent in Rowan County.

Salisbury High’s Vance Honeycutt is manning center field and leading off, walloping homers and stealing bases for the Tar Heels as a freshman. The next baseball stop for Hightower’s dominating senior teammate Cameron Padgett (5-0, 0.00 ERA, 59 strikeouts, 7 walks) will be on the mound for UNC at Boshamer Stadium.

And on deck — there’s Hightower.

“Growing up, Ike Freeman was the guy I watched play for East and wanted to be like,” Hightower said. “When Ike signed with UNC that became the school for me, and when UNC offers you, it’s not a very hard decision. Definitely the dream school for me, and now I don’t have to deal with any worries about the future. It’s nice to have the recruiting done early.”

Hightower debuted on the East varsity as a freshman in the COVID-delayed 2021 season. He batted .380 and scored 15 runs in 15 games. In the field, he made two errors, while being involved in six double plays.

UNC’s first look at Hightower came by accident, on a day when he was suiting up for the area’s elite showcase team — the South Charlotte Panthers.

“UNC was there to see some of the other guys in that game, but I had a good day, they noticed me and they liked me,” Hightower said. “That’s where the recruiting started, and Ike definitely helped me with that.”

At 5-foot-11, 150 pounds, Hightower has done a lot of growing in the past year. He’ll no doubt grow some more. He cheerfully reports that he has sprouted up well past his father’s modest height. Both of his parents were outstanding competitors in their day.

Hightower’s father, Brian, was an All-South Atlantic Conference second baseman for Catawba College in 1992 and 1993. A teacher and coach, he was East’s head baseball coach from 2005-19, coaching 287 wins and 132 losses. He’s third on the county’s all-time wins list.

Hightower’s mother, Addie Holbrook Hightower, was one of the best basketball players in Statesville High history and is in the Iredell County Hall of Fame. She was a two-time conference player of the year and stood out in the East-West All-Star Game before heading to Wingate.

“Cobb was raised with sports, grew up with baseball from a young age, and he’s got a very high baseball IQ,” East head coach Brett Hatley said. “He was already a good player when he got to high school. His baseball instincts, on the bases and in the field, are off the charts. He understands the game and he understands how to play the shortstop position like few guys his age do.”

While it seems like the 2022 baseball season is still young, teams actually have played about the same amount as they did the entire 2021 season.

Hightower has made one error in 39 chances for a 12-1 team that is ranked first in 3A West by MaxPreps.

“Our pitchers have been striking out a lot of guys,” Hightower said. “When it gets hit to me, it’s probably a lefty hitter or a right-handed hitter who hit a changeup.”

“That was a 2-and-0 fastball, and I put a good swing on it,” Hightower said. “Awesome feeling.”

He’s only walked eight times in two seasons, not an ideal rate for a lead-off hitter, but he’s also struck out only eight times. Like his teammates, he goes to the plate looking to hit the first strike hard.

“In the box, Cobb always looks comfortable and he is always on time, fastball or breaking ball,” Hatley said. “He just doesn’t get fooled much.”

Hightower has a plan for his future. That plan extends beyond when the cheering stops on the diamond.

“I’m not looking for a career as a coach,” he said. “Definitely going after a business degree at UNC.”

NOTE: East’s big game at South Rowan has been moved back to Wednesday due to the weather forecast. The teams will play at Staton Field on Friday.