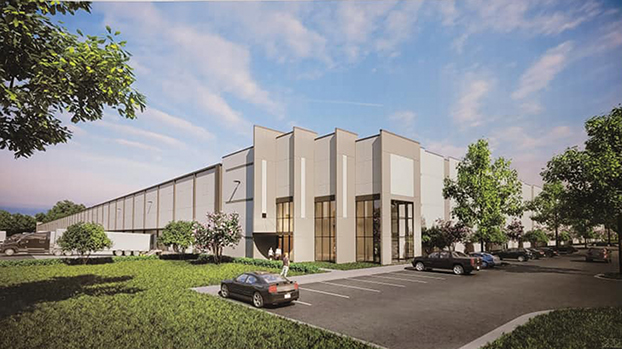 A rendering of the 1.08 million-square-foot speculative building in an industrial park being planned on Long Ferry Road. Images of rendering courtesy of Jacqui Smith Watson

SALISBURY — The Rowan County Board of Commissioners on Monday agreed to reimburse a developer $4.2 million in future infrastructure improvements for a 380-acre industrial park being planned for Long Ferry Road.

Before the board voted to approve the reimbursement, several members of the public took advantage of a public hearing to ask questions or voice opinions about the industrial park, prompting the board to delve into its rationale for incentivizing the project.

Red Rock Developments is planning to invest $198 million to construct six speculative buildings totaling 2.6 million square feet of commercial space off of exit 81, not far from Chewy’s fulfillment center. Five of the buildings will be on the south side of the road with one building on the north side. The buildings will be constructed as shells and then sold or leased to an end user.

The industrial park will be built in three phases. The company is seeking incentives from the county for each phase of the project, but commissioners only considered the request for phase one on Monday night.

Phase one of the project includes the two largest buildings in the site plan, which account for 1.65 million square feet of space and will necessitate a $117 million investment from Red Rock. Red Rock is aiming to break ground on phase one by late summer and complete the first two buildings by the end of the year.

In lieu of a typical investment grant from the county that would have carried a $3.2 million value, the board agreed to reimburse the company $4.2 million for water, sewer and road improvements needed for phase one.

Todd Ward, senior vice president of planning and entitlement with Red Rock Developments, described the incentive as “performance-based” because the reimbursement will only be paid once the lease or sale of substantially all of the facilities and property is made with a third-party job creator. The incentives for phase two and three of the project would also be dependent on  tenants being in the buildings.

“There are no incentives unless there is a tenant, so all the risk is purely upon Red Rock,” Ward said.

Much of the conversation during the meeting centered on road improvements associated with the industrial park. The North Carolina Department of Transportation completed a traffic impact analysis and determined a number of improvements will be needed to mitigate traffic created by the site.

The improvements include the installation of traffic lights on both the northbound and southbound ramps at the intersection of I-85 and Long Ferry Road and at the intersection of Long Ferry and Front Creek roads. Another intersection further down Long Ferry Road will be monitored for the placement of a traffic light. Several right and left turn lanes will be added to various entrances to the industrial park. A right turn lane starting at the I-85 northbound exit ramp and extending to the entrance to Chewy will also be added.

Since the occupants of the industrial park buildings have not been determined, Ward said Red Rock worked with the NCDOT to account for the maximum amount of traffic the site could generate.

Before the board voted unanimously in favor of reimbursing Red Rock $4.2 million for the infrastructure improvements, two residents who live off of Long Ferry Road raised several questions about the project.

Jacqui Smith Watson questioned whether that much commercial space was really needed in addition to the other speculative buildings being constructed in Rowan County.

Commissioners Chair Greg Edds said there is a current demand for 34 million-square-feet of manufacturing and warehouse space in the Charlotte region, according to an industry study he recently reviewed.

“These folks aren’t building them if they don’t think they can fill them,” Edds said.

William Shoaf, who lives on Long Ferry Road, questioned if the $4.2 million reimbursement would be felt by taxpayers.

Based on the county’s current tax rate, the completed project should generate approximately $769,275 per year of real property tax revenue and $7,692,750 over a 10-year period. Utilizing these projections, the county would recoup the $4.2 million expenditure within five years and finish with $3,492,750 in net revenue over a 10-year period, according to the Rowan EDC. Ward said those projections don’t account for the tax revenue the county would benefit from if a user decides to make improvements to one of the buildings or invest in a significant amount of new equipment.

Shoaf also expressed skepticism at the ability of the companies who may occupy the industrial park buildings to find employees, specifically mentioning the numerous “now hiring” signs seen throughout the county. Ward said Red Rock conducted a labor study to determine that the local labor market could support the industrial park.

One resident took the lectern to voice their support for the park and admonish those who are against the development. The person, who said their family owns the house on Long Ferry Road that would be surrounded on all sides by the park, implored people to think about the number of jobs the project would generate.

The parcels comprising the site still need to be rezoned from rural agricultural to a use that allows for industry before ground is broken on the industrial park. A date for the Board of Commissioners to consider the rezoning has not been set.