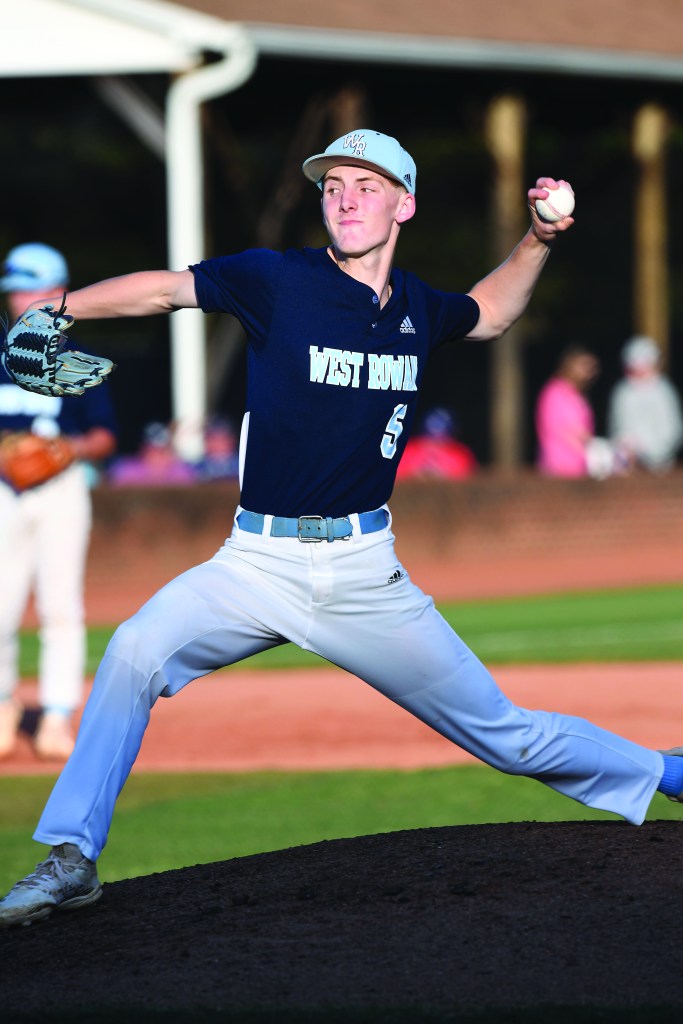 West Rowan won 16-1 at Concord on Monday in a South Piedmont Conference baseball game moved up a day due to weather concerns.

The Falcons took  a precarious 2-1 lead to the fourth, but that’s when they erupted for six runs.

West got eight runs in the top of the seventh.

Lucas Graham and Matthew Connolly had three hits and two RBIs. Gouge, Burton and Noah Loeblein had two hits each.

Carson got only three hits on Monday, but still won 1-0 in SPC play against Central Cabarrus in a game moved up due to Tuesday’s weather forecast.

Jacob Efird doubled to lead off the second inning for the Cougars (8-5, 4-3), was bunted to third and came home on Aaron Coe’s sac fly.

Mikey Beasley (4-0) pitched very well into the sixth inning for the win, while Casey Crawford earned a save.

The highly anticipated South Rowan-East Rowan baseball game has been pushed back to Wednesday by the weather forecast.

That game will be played at South, with a starting time of about 7 p.m. It’s expected to be a matchup of two undefeated future ACC pitchers in South junior lefty Haiden Leffew (Wake Forest commit)  and East senior Cameron Padgett (UNC signee).

Padgett is yet to be scored on this year and has fanned 18 in a game this season, while Leffew has struck out 17 in a game.

Both teams are 6-0 in the South Piedmont Conference.

The teams also are scheduled to play at East’s Staton Field on Friday.

Tommy Whitman (Stony Point) accomplished the feat of a rare hole-in-one on a par-4 at McCanless on Saturday.

Whitman used a driver to ace the No. 15 hole that was playing 300 yards from the white tees.

Whitman was playing in the Lake Harvest Church of God fundraising tournament with Lonnie Christenberry, Matt Lewis and Kenny Helms.

The group rode up to the green thinking the ball had to be close. The group in front of them said they were trying to putt and Tommy’s ball rolled right by them and straight into the hole.

Heather DePalma-Spivey had closest to the pin.

In the South Atlantic Conference women’s golf tournament at Hartsville, S.C., play continued on Monday and concludes with the third round today.

Anderson is 14-over and leads second-place Limestone by 11 strokes. Catawba is ninth in the 13-team field, 54 shots off the pace.

Senior Trey Tobias’ surge on the back nine on Sunday included a birdie on the 17th hole that proved to be the difference as Charlotte notched a one-stroke victory to claim the title at the Irish Creek Intercollegiate in Kannapolis.

Charlotte, ranked 27th, and No. 21 Ole Miss, were staged a two-team battle for the top spot in the 15-team field.

Kary Hales (Carson) and Courtnee Carter hit home runs, and Hales pitched a complete game to give the Indians a chance.

Salisbury senior Cameron Stout has been invited to play in the Hoopfest Classic All-Star Game.

Roger Williams is a powerhouse in New England in the sports of swimming and sailing.

Sign-ups are at Harold B. Jarrett Legion Post 342 at 1024 Lincolnton Road.

Mocksville has announced that it will be playing for a 40th consecutive season at Rich Park.

The Rowan County Championships are set for   April 19 at the Country Club of Salisbury.

The Rowan County Championships are set for   April 20 at East Rowan.

The Hornets (10-0, 9-0) stayed undefeated and  wrapped up the outright conference  championship with the win over the second-place Yellow Jackets (9-3, 7-2).

Salisbury improved to 4-1 in the Central Carolina Conference and 9-1 overall with a 4-0 victory over East Davidson.

Sutton Webb scored a first half hat trick for the Hornets, and Kendall Colwell scored the match’s only goal of the second half.

Assists were credited to Colwell, Webb and Sydney Hlavacek. Hannah Schmeltzer recorded nine saves for the Hornets, who also got excellent play from Sage Huffman and Stella Koontz.  Next for Salisbury is    a CCC matchup Wednesday vs. Lexington. Game time is 6 p.m.

Students were selected based on success in bass tournament competition, academic achievement and leadership in conservation and community service.

McCall has made a college commitment to Lander’s fishing program and he’s currently playing on the Carson golf team.