High school girls basketball: Brice had a team that majored in chemistry 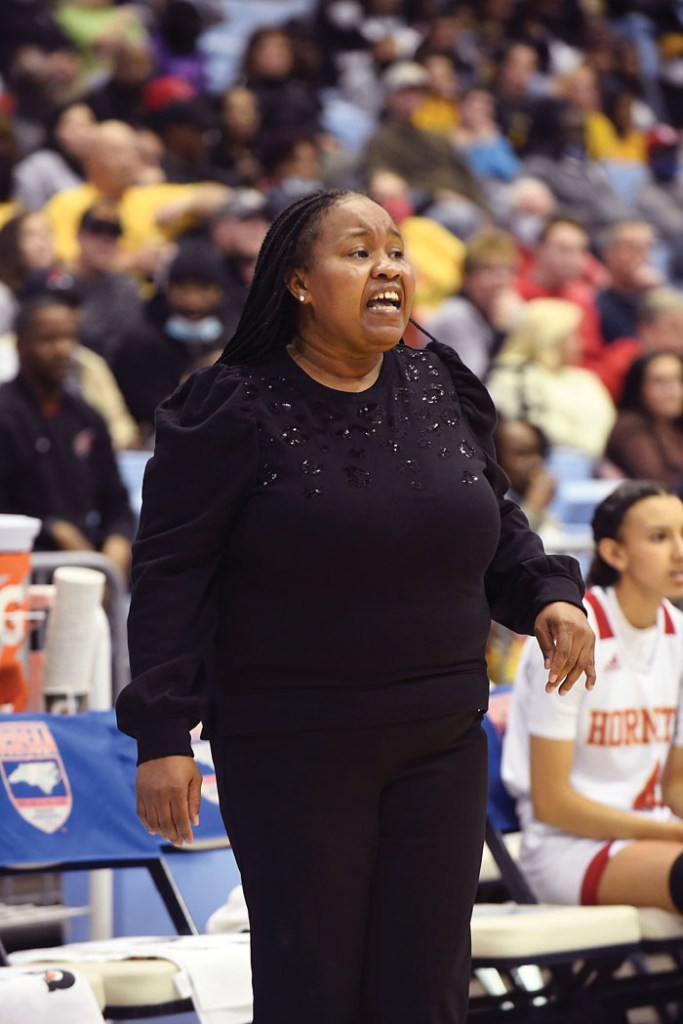 West Rowan Ashley’s Poole guided a bunch of 15-year-olds through an obstacle course of adversity to 17 wins. Alex Allen orchestrated a comeback season at South Rowan. Bri Evans got about all she could have out of the East Rowan Mustangs.

Stouder and Smith were coaches of the year in their respective leagues for miracle-working efforts, but journeys to state championships are incredibly hard and incredibly memorable. That’s why Salisbury’s Lakai Brice is the Post’s Rowan County Coach of the Year.

Brice had the horses, had the talent, had depth and size like no one else in the county had, but it’s also safe to say that no one watched more film or outworked her.

As far as building team unity, Brice was able to find the precise recipe. Everyone talks about buying in, about great chemistry, about sharing the ball, about playing for each other, but words are basically wind.

This team went out and did it on the court.

The Hornets had girls on the bench who could have started for anyone else in the county, but they still looked happy. When the Hornets won, girls who played three minutes and didn’t score were jumping up and down and running around like they were airplanes ready to take flight. You can’t fake that kind of joy. It was genuine. This bunch loved each other.

Salisbury boys coach Bryan Withers would watch the SHS girls play and would get inspired by them and try his best to emulate them. These girls had that elusive togetherness that every team strives for.

They held a parade in town for the Hornets (28-1) on Saturday, so the championship is starting to sink in now.

The rings and the humongous photo on the wall outside the gym will be a reality, not just a dream.

“I thought it was so cool when Carson won state last year,” Salisbury guard Kyla Bryant said. “And now we’ve done it. It takes a lot, mentally and physically.”

Brice, Bryant’s mother as well as her coach, said the Hornets’ run can be traced back to August workouts.

“From our very first day together, the mindset was winning a state championship,” she said. “We’d been one of the best in 2A for years and we knew we had chance to be special. I got the team into a fall league. I couldn’t coach them, but I could watch them. I knew we were good.”

The Hornets began to steamroll people once Bryant recovered from a wrist injury.

They overcame the disappointment of not getting to play the Christmas tournament championship game — the seniors never got to win one — and they wiped out their opponents in the Central Carolina Conference.

“It was a team built on defense,” Brice said. “The girls worked very hard to improve as individual defenders and as team defenders. We got better with our man defense and we could attack teams out of a 2-3 zone or with 2-2-1 pressure. Coach (Mitchell) introduced the girls to the 1-3-1 zone, and that made a difference. In past years, our best defender, Jamecia Huntley, was in the post. With the size we had this year with MaKayla Noble and Haley Dalton healthy, we could put Jamecia on a wing player and shut a big scorer down.”

The team got excited about playing defense, even the shooters.

“We’d scrimmage at practice, and I’d tell the starters they were on offense, and they’d say. ‘No! We want to play defense first.’ That’s how it went.”

Only two teams reached 50 points against the Hornets.

While the Hornets stormed through the regular season, there still were skeptics. The CCC had a number of undermanned teams. What would happen when the Hornets started facing serious opponents in the playoffs and had to play 32 minutes?

“Going into the playoffs, we were still hearing that we hadn’t played anybody,” Brice said. “But I thought we had a fantastic run in the playoffs. Every game, even the first-round game with Surry Central, was against a quality, well-coached team.”

In the regional final, a 45-44 double overtime triumph over defending state champ Shelby, a team with three of the state’s most celebrated guards, was one of the classic games in program history. The 54-44 state championship victory in Chapel Hill against a Farmville Central squad that boasted two of the biggest talents in the eastern half of the state, made it a 27-game winning streak for the Hornets. That win meant state title No. 4 and the first since 2011.

“My only sadness is we could not get a ring for Tyzarea Alexander and Bryanna Troutman, the girls who started a turnaround at Salisbury,” Brice said.

Salisbury is so successful now that four-year varsity players McCullough and Jaleiah Gibson went 96-10 in their careers.

Coaches Brice, Mitchell and Talita McCain have things rolling. It’s a junior-heavy team, so the Hornets have at least one more monster season in them.

Brice is the Post’s Rowan County Coach of the Year for the third time, which puts in her in a tie for third all-time. Stouder has been honored four times. Jesse Watson, a legend who coached marvelous East Rowan teams, was honored by the Post eight times.

Stats don’t always tell the complete story, not in an era of running clocks, but statistically, Salisbury had the most dominant team in school history. The average winning margin was 36 points.

This was the stingiest defensive team in school history, allowing 29.2 points per game. The Hornets scored 65.9 points per game to rank third all-time offensively, behind the 2007-08 and 2010-11 clubs.

Bryant, McCullough and Huntley combined for about 40 points per game, so  the Hornets got 25 per game from their committee of seven smiling role players.

“I’ve been watching the NCAAs,” Brice said with a laugh. “I’ve been getting a few new plays.”