Mako, East Rowan keep on rolling with 5-0 victory over Carson 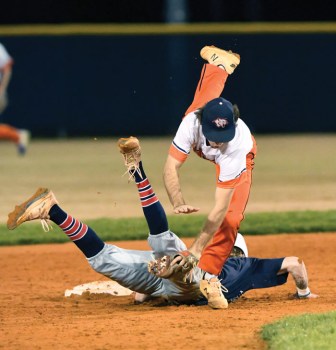 East's, Cameron Padgett 11 out at 2nd with Carson', Emory Taylor 5 flipping., by Wayne Hinshaw, for the Salisbury Post 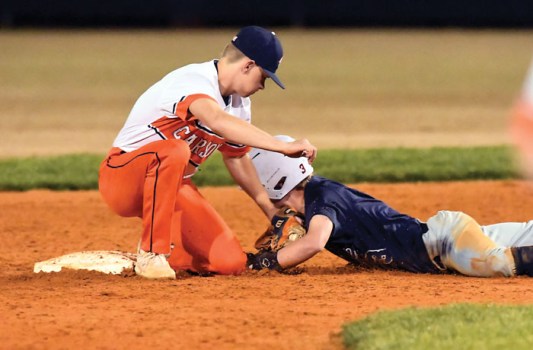 East's Logan Dyer gets tagged out trying to steal second base by Carson's Hunter Burris. photo, by Wayne Hinshaw, for the Salisbury Post 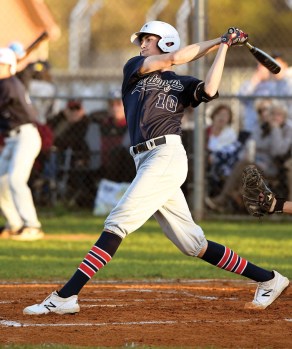 East's Chance Mako had two doubles in the game. photo by Wayne Hinshaw, for the Salisbury Post 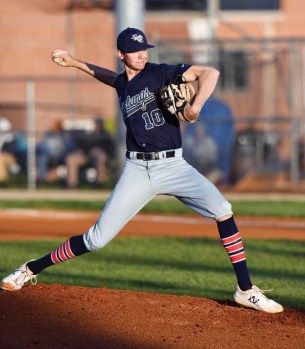 CHINA GROVE — It was wonderful watching East Rowan’s Chance Mako pitch Friday night. Unless, of course, he was pitching to you.

Mako and the Mustangs weren’t April fooling around in a 5-0 triumph at Carson, where the tall right-hander manipulated the Cougars’ lineup the way Miles Davis used to play the trumpet. He tossed a complete-game one-hitter, struck out 10 and retired 21 of the 24 batters he faced.

“Mako was simply dominant on the mound,” winning coach Brett Hatley said after East (12-1, 6-0 SPC) notched its sixth shutout and second this week. “If they don’t score, they don’t win. Plus he was big-time with the bat.”

It was hard not to be impressed with the 6-foot-6 junior, who also contributed a pair of doubles and drove in three runs. But it was Mako’s top-shelf mound performance that made headlines and had the early-spring crowd buzzing from the start. You had to learn Braille to hit his fastball, a heater that routinely crossed the plate with low-90s giddy-up. And his money pitch — that swing-and-a-miss slider — had Carson batters flailing at offerings like someone trying swat a moth with a rolled-up newspaper.

“The slider’s a pitch I’ve taken a year to work on,” he said after improving 4-0 and lowering his ERA to a radiant 1.52. “I’ve talked to some Major League players about throwing it. They told me the harder you throw it, the tighter the break. It felt great right out of the bullpen. I knew it would be lights-out tonight.”

Carson’s 16th-year coach Chris Cauble was again denied entry into Rowan County’s 400-win club. “We knew runs were gonna be hard to come by,” he said after CHS (6-5, 3-3) suffered its third straight loss. “They were in the first game (East’s 10-0 win on Tuesday). I was hoping to get my 400th against the school I played for years ago. Would’ve been nice. But (Mako) throws hard, there’s no doubt about that. N.C. State saw something in him and made an offer. He’s got a very good chance to get drafted if he keeps his head straight and continues to improve.”

Mako outdueled losing pitcher Hayden Simmerson, the junior righty who fanned East’s first four batters before his command mysteriously disappeared like socks in the dryer. He allowed three runs on four hits in the top of second, aided by two Cougar errors.

“I thought our pitcher was equally as good,” Cauble said. “If we catch a couple balls that were routine, I don’t think they score two runs. But that’s baseball. We’ve got to lick our wounds and move on.”

Simmerson fell to 2-3, but deserved a better fate. He worked six innings, yielded seven hits and just two earned runs — finishing with nine strikeouts and five walks. Mako doubled home the game’s first run before East catcher Tristan Miller made it 2-0 on a groundout back to the box. “I tried to direct a bunt toward the first-base line, like I did last week (against Central Cabarrus),” he explained. “It didn’t work out, but I still got the run home.”

Designated hitter Logan Dyer plated ER’s third run when he feathered a two-out, RBI-single into center field, capping a three-run second inning. “Simmerson is a pretty good pitcher who throws hard,” said Dyer, a 130-pound sophomore. “I had to shorten my swing and put it in play.”

In the fifth, Cameron Padgett and Griffin Warden circled the bases on Mako’s screaming double to the left-center gap. Down the stretch, Mako struck out two and issued two walks in the last of the seventh before inducing Cody Russell’s game-ending bounce-out.

“Compared to his last start, this one was spot-on for Chance,” Miller noted. “We made sure he got extra work to prepare for tonight. He did and it worked out.”

NOTES: Outfielder Austin Efird had Carson’s only hit — a line-drive single to left leading off the home sixth. … Left-hander Mikey Beasley pitched a 1-2-3 seventh inning for CHS. … Mako retired 13 of the Cougars’ first 14 batters. He threw 97 pitches and his fastball peaked at 94 mph. … Dyer and Schenck each reached base three times. Crackerjack leadoff hitter Cobb Hightower went 2-for-4 with a pair of singles. … Carson plays a makeup game against Southwest Guilford — an undefeated 4A team — Saturday afternoon at Finch Field in High Point. The Cougars go to Central Cabarrus on Tuesday. East visits South Rowan to open a pivotal home-and-home set on Tuesday, then hosts the Raiders on Friday.