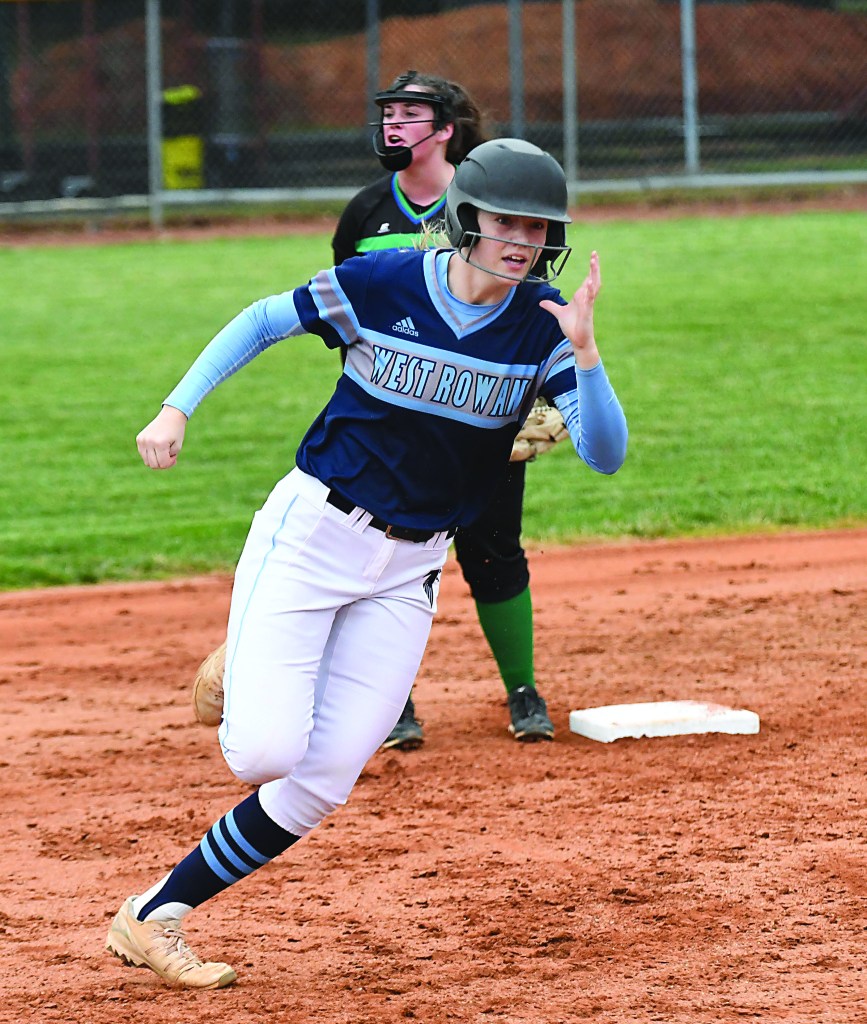 MOUNT ULLA — When you play baseball in a league with East Rowan and South Rowan, every Tuesday and Friday is a must-win if you aspire to win a conference championship.

West Rowan is still under the radar but has high goals and lofty aspirations. The Falcons (9-3, 5-1) have the Mustangs and the Raiders in their future, but they kept pace with the South Piedmont Conference co-leaders on Friday and stayed in a blistering league race with a 10-1 romp against Central Cabarrus.

West’s SPC loss came at Northwest Cabarrus in a pitching duel on March 18.

West has won five in a row.

Casey Gouge keyed the Falcons’ offense with three hits and four runs scored out of the lead-off spot.

Elijah Palmer and Zander Burton had three RBIs each in the middle of the lineup.

Gouge started the bottom of the first with a triple to center field. Palmer was hit by a pitch, and Zander Burton’s two-run double got the Falcons rolling.

West plays at Concord on Tuesday. The Spiders are 0-fer in the league but dangerous. They came close against Northwest Cabarrus on Friday in a 7-6 setback.

MOUNT ULLA — West Rowan beat Carson 6-0 in South Piedmont Conference softball on Friday, but it was a tougher game than it sounds like.

One play changed everything.

It was still scoreless in the top of the third when the Cougars loaded the bases with one out against freshman pitcher Arabelle Shulenberger on an error and two hit batsmen. Abbey Nixon, a Lenoir-Rhyne recruit and Carson’s best hitter, was next, and she lined a rocket. “A seed,” West Rowan coach Jimmy Greene called it.

It would have meant two runs, maybe three, but West Rowan center fielder Ashlee Ennis ran the ball down. Carson baserunners were certain the ball would fall and failed to tag up. Ennis got the ball back to the infield in a hurry and held the runner at third. Shulenberger got the next hitter to ground out, and the score stayed 0-0.

“I know what the final score was, but it’s a rivalry, and it was a scrap,” Greene said. “We put the bat on the ball tonight, but we won with defense. We got diving plays and plays in the hole from our shortstop (Emma Clarke), Brooke Kennerly caught a great game and Ashlee’s catch in center field was the biggest play of the night.”

Shulenberger started rolling in the fourth. She held the hard-hitting Cougars to two hits. She hit three batters, but she only walked one and struck out five.

“This was the most focused she’s been, the best that she’s been into a game mentally,” Greene said. “She pitched with a lot of confidence, knowing her defense was going to make plays behind her.”

Carson pitcher Lonna Addison shut out the Falcons until the fourth.  Kenadi Sproul reached on an error, and Clarke followed with a two-run homer, a towering blast to center field, to open the scoring.

Clarke’s double to right and Kennerly’s two-run homer made it 4-0 in the sixth. Then West tacked on two more with Shulenberger’s double knocking in one of them.

Addison struck out five, with no walks for the Cougars. Makayla Johnson had a double.

West (8-2, 5-1) stayed in second place behind Central Cabarrus and is a game ahead of Carson (5-7, 4-2), which has taken on a brutal non-conference schedule.

MOUNT ULLA — Brittany Vanhoose scored on a PK and lifted West Rowan to a 1-0 win against Carson on Friday.

West ended a 13-match losing streak to the Cougars. The Falcons had not beaten Carson since 2013.

“It’s a big win for the girls, for me and for the program,” West coach Alan Puglia said.

Emily Kelly made eight saves for the Falcons, who won a 1-0 contest for the first time since they beat Central Cabarrus in 2016.

“I told her it was the best game she’s ever played for us,” Puglia said. “Carson had some good scoring opportunities in the first half, but Emily made two really big saves.”

When the Falcons started losing the struggle in the midfield, Vanhoose fell back to center mid and turned that around.

West got big defensive efforts from fast junior Evelyn Kwitkowski and Temperance Jones, a freshman who came to West from Wisconsin.

“They really see the game and they’ve given us two quality center backs,” Puglia said.

Juniors Anna Mead (10 goals, 3 assists) and Vanhoose (8 goals, 10 assists) have supplied most of the firepower for the Falcons (7-4-1, 3-3-1), who have the best record of Rowan’s four South Piedmont Conference squads.

“Anna is a true striker,” Puglia said. “Brittany gives us a lot of versatility.”

Lake Norman Charter is a powerhouse, ranked No. 1 in 3A West by MaxPreps, and Northwest Cabarrus is strong, but the Falcons have a great chance to finish in the top half of the league.

“There’s a difference this year in our confidence level,” Puglia said. “We’re going out there knowing we can compete. The girls played a really good game against Carson, fought from the start right down to the last whistle.”

West is home against South Rowan on Tuesday. The Falcons and Raiders battled to a scoreless tie in their first meeting.

Carson (3-8, 2-5) will be home Tuesday against Lake Norman Charter.