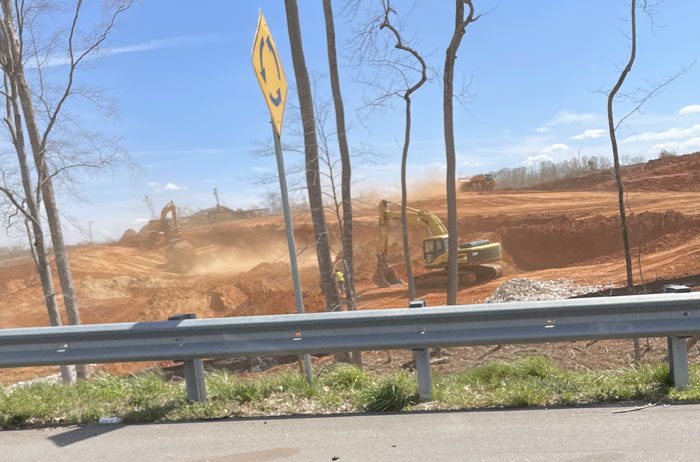 Workers using heavy equipment have been moving dirt on a parcel beside Interstate 85 at Exit 68 near China Grove for what will be a Macy's distribution site. Paris Goodnight/Salisbury Post

Rowan County has pulled “Project Rabbit” out of its hat.

Macy’s, the national department store company, will invest more than $584 million in a 1.4 million-square-foot “automated, direct to consumer” fulfillment center in China Grove.

“We are delighted to welcome Macy’s and its state-of-the-art facility to North Carolina,” Gov. Roy Cooper said in a news release. “When you combine our robust transportation network with our skilled workforce and great quality of life, economic development wins like these will continue to be celebrated statewide.”

The center will be located at the intersection of I-85 and U.S. 152 on Exit 68. It will serve as Macy’s main shipping location for customers in the central southeastern United States, but will ship orders directly to customers nationwide, accounting for nearly 30% of the retailer’s digital supply chain capacity once fully operational.

“This state-of-the-art facility is a significant milestone for Macy’s, Inc. as we invest in strengthening our omnichannel ecosystem. It will support growth of our business as a leading omnichannel retailer,” said Dennis Mullahy, Macy’s chief supply chain officer, in a news release. “We are delighted to become a member of the China Grove community and look forward to partnering with local and state officials to bring jobs and drive opportunity for local residents.”

Macy’s is expected to employ 2,800 positions at the fulfillment center. Previous numbers relayed to local leaders by the Rowan EDC projected 5,100 total jobs associated with the project, including 2,500 full-time positions and 2,600 seasonal part-time jobs — equal to the largest jobs announcement in the county’s history.

“Project Rabbit,” as it’s been called in local meetings over the past several months, has been touted by the Rowan EDC as a historic economic development opportunity for the county. Rowan County was competing against communities in South Carolina, North Carolina and Ohio to land the e-commerce center, but a site in South Carolina was Rowan County’s primary competition.

Analysis from JobsEQ showed that adding Macy’s into the community would also add more than 600 indirect and induced jobs, more than $75 million in sales and over $30 million in compensation, according to the Rowan EDC. Salaries for the new positions will vary, but the project could create a potential annual payroll impact of more than $93 million per year for the region.

The North Carolina Economic Investment Committee on Thursday afternoon approved state incentives totaling just north of $11 million for the project, including community college training valued at more than $3 million and infrastructure support from the Department of Transportation which could reach more than $5 million. A Job Development Investment Grant worth up to $2.3 million will incentivize the creation of 230 jobs that will pay a minimum average wage of $48,772.

The state’s sweetener is in addition to tax incentives of about $50 million previously approved by both Rowan County and China Grove. The county and the town have agreed to return 80% of new taxes paid by Macy’s for 15 years, retaining $6.8 million and $5.6 million in tax revenue during the incentive period, respectively.

“Macy’s multimillion-dollar investment is a strong vote of confidence in Rowan County,” Sen. Carl Ford said in a news release. “I am grateful for the diligent collaboration of local, state, and company officials that helped bring this project to our community.”

“This is yet another great win for North Carolina and Rowan County,” Rep. Harry Warren said in a news release. “Our region is home to incredible talent that are ready to fill these new positions and support Macy’s growth strategy. Many thanks to our great local economic development folks, Rod Crider, County Commission Chairman Greg Edds, and their respective teams for the excellent work they continue to do bringing great companies to Rowan County.”