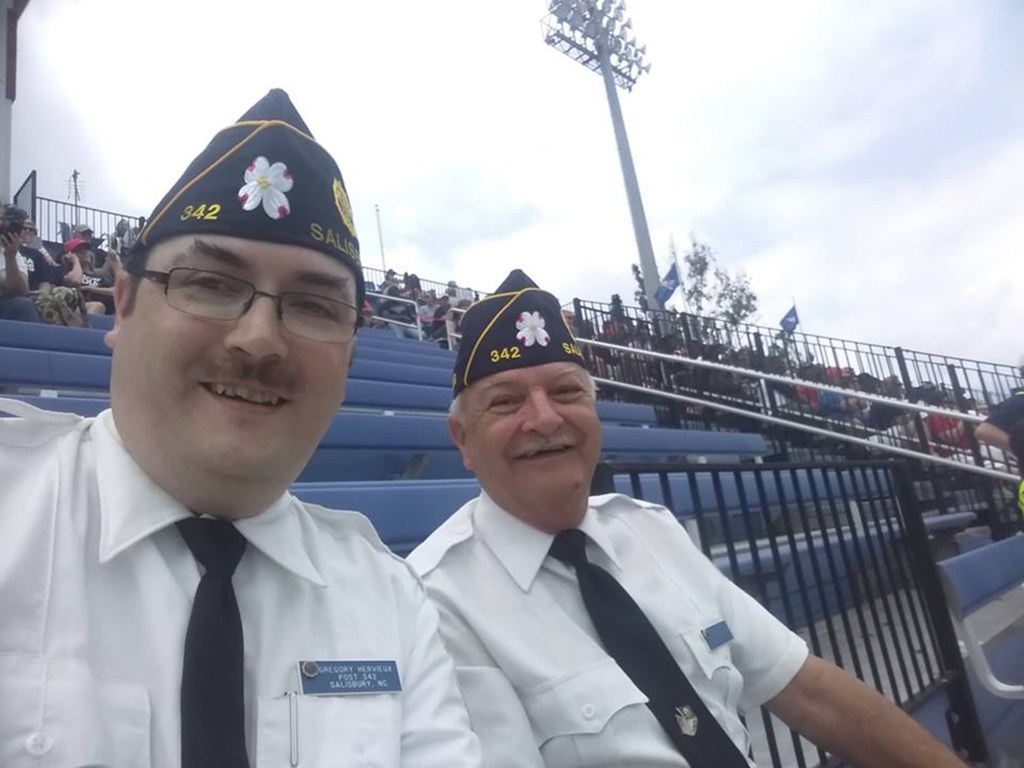 SALISBURY — For father and son veteran duo Gerald and Gregory Hervieux, serving a community does not stop after retiring from the U.S. Navy.

On March 9, Gerald Hervieux was having a typical day inside his home on a block of Village Creek Way when he first heard screams coming from outside. His first assumption was someone getting assaulted across the street, which set him into the headspace of what he had been trained to do when seeing a life in need of help. The horrific sight of a 4,500-pound Tesla on top of the leg of their four-month pregnant neighbor immediately kicked him into gear to find a way to now save two lives.

Upstairs, 38-year-old son Gregory Hervieux was in his room, alarmed by the sound of his father slamming the front door.

“I heard the screams but at first I thought it was kids playing across the street,” he said. “It wasn’t ’till I heard my dad going outside that I knew something wasn’t right.”

The father and son made a dash across the street before Gerald notified another neighbor to call emergency medical services. They then devised a plan to pick the car up off the woman. The car fell off the jack stand as she attempted to change a tire. The drop of the vehicle had the jack now under the Tesla and turned on its side, making it useless to try and raise it back up.

Gerald is 74 and had recently underwent open-heart surgery for a triple bypass, but he refused to let that stop him in the moment. His son Gregory’s extensive training in fire safety had him prepared for unexpected events. With the help of his father, the two hand-lifted the corner of the Tesla while a nearby neighbor pulled the expecting mother out. The father said he and his son had an adrenaline rush much like the ones they experienced during the fires they fought in the Navy.

The Hervieux duo say the woman was hyperventilating as the father held her head and was able to help her slow her breathing until help arrived. The Rescue One squad of the Salisbury Fire Department showed up to the scene, which is the same team Gregory serves as a volunteer firefighter and has certifications in firefighting and hazmat. Ultimately, the woman only sustained a hematoma on her leg, and her developing child was unharmed.

Both Gerald and Gregory said there is no reason to stop doing what has been instilled in them to do. It has been 51 years since the father was set out to sea with the Navy but he still carries a willing heart to help communities in more ways than one.

“It’s regimental,” Gerald said. “In our training, we were forced to have a plan of how things were going to work or people would die. It’s conditioned us to still think like that today and I’m going to continue to do that if that means I can still save lives.”

Gerald was deployed to tour Europe, mainly in the Mediterranean, to work with his Navy crewmates to control fires, which included a search for the U.S.S. Scorpion in 1968. After serving from 1965 to 1971, he began his involvement in computer technology and sports. He worked as both a flagman and a pace car driver for NASCAR after being asked by a driver on the team to do some work on his car. He would go on to work for the sports team for 30 years.

Gregory drove quarter-midget race cars before enlisting in the Navy to serve from 2003-08. He now takes classes for his degree in fire science, which will be acquired in the next year.

In 1998, Julius Erving, also known as Dr. J, asked the Hervieux family to come to North Carolina with the assets of Gerald’s computer skills and his wife’s experience in office work to help him form the first African-American NASCAR team with a sponsorship from Dr. Pepper.

Both Gerald and Gregory will be presented with a medal for heroism by the American Legion for the rescue.