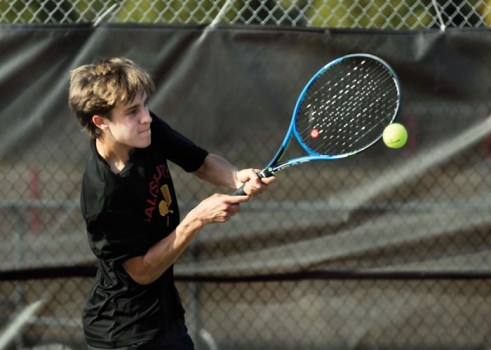 Salisbury's No. 1 player. Will Koontz., photo by Wayne Hinshaw, for the Salisbury Post 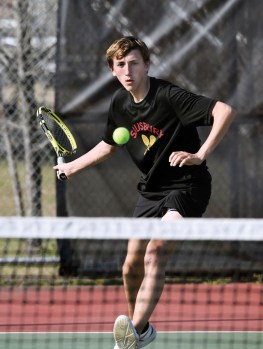 Salisbury's No. 2 player. Colin Donaldson., photo by Wayne Hinshaw, for the Salisbury Post 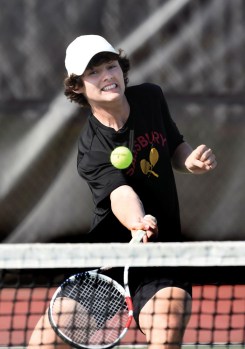 Salisbury's No. 3 player., Gray Davis., photo by Wayne Hinshaw, for the Salisbury Post 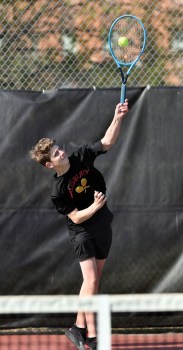 Salisbury's No. 4 player., Reid Hlavecek., photo by Wayne Hinshaw, for the Salisbury Post 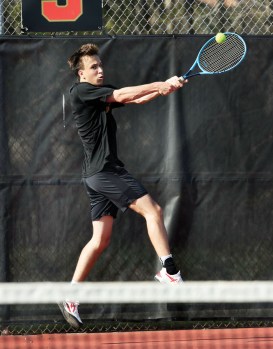 Salisbury's No. 5 player. Wyatt Goodnight., photo by Wayne Hinshaw, for the Salisbury Post

Salisbury's No. 6 player., Soyer Cornelison., photo by Wayne Hinshaw, for the Salisbury Post

The Hornets prevailed 9-0 against South Davidson on Monday and romped 9-0 on Wednesday against East Davidson. In between, on Tuesday, there was a different sort of 9-0 match at second-place Lexington. That was a tough 9-0, if there is such a thing.

“The Lexington match could easily have been 3-3 going to doubles,”  Salisbury head coach Milt Griffith said. “We got the test we needed from Lexington— that’s not the Lexington people are used to — but we worked through it. We did what we needed to do in order to win.”

Will Koontz and Colin Donaldson won pretty handily at No. 1 and No. 2 singles against Lexington. Reid Hlavacek and Kevin Williams, won highly competitive matches at 4 and 5. No. 3 Gray Davis and No. 6 Wyatt Goodnight had to fight through tiebreakers, with Goodnight’s narrow decision coming down to a handful of clutch points.

Salisbury (9-0, 8-0) is still undefeated, although Griffith will be the first to admit this is not one of his powerhouse squads.

With realignment, the Central Carolina Conference isn’t as rugged a tennis league as it’s been in the past, but Griffith doesn’t fret about that.

“Even if we had the same league as we did last year, with teams like Ledford and North Davidson, I think we still could win it,” he said.

Salisbury has experienced adversity. Koontz missed the first few matches with a serious viral infection, but he’s returned and has resumed winning matches at No. 1 singles.

“I don’t know that Will is all the way back yet, but he’s getting closer,” Griffith said.

Donaldson, one of the school’s soccer standouts, is another veteran. He’s back in his familiar role at No. 2 singles.

Hlavacek and Goodnight are also experienced players. They were in the 2021 lineup.

Davis, a freshman, has been a key addition to this season’s team.

Kevin Williams, a 6-foot-2 football receiver who transferred from Raleigh for his senior year, was a surprise. He came out for tennis and took charge of the No. 5 singles spot.

“He’s quick and he’s a backboard,” Griffith said. “He doesn’t have experience, but he’s very athletic.”

Williams was absent from the lineup on Wednesday against East Davidson, as he couldn’t locate his jersey.

Griffith, a guidance counselor at Salisbury, saw that as a teachable moment. Williams sat out.

“There’s more to life than tennis,” Griffith said. “You have to be responsible. In a few months, some of our guys will be graduating, and we’ve got to try our best to keep them level.”

Goodnight moved up from No. 6 to Williams’ normal spot.

Soyer Cornelison came off the bench to play No. 6 singles and teamed with Koontz at No. 2 doubles. Griffith designated Cornelison as the “Player of the Match.”

Koontz, Donaldson, Davis, Hlavacek and Cornelison cruised in singles. Goodnight had the most challenging singles match (6-4, 6-1), but he fought through it.

No. 1 and No. 2 doubles units had to be adjusted without Williams, but the Hornets had no issues.

This was the sort of breezy match they’ve gotten used to winning over the years.

Lexington will come to Salisbury for  a rematch on April 4. That will be exciting. That also will be Senior Night for the Hornets.

There will be a time interval between the end of Salisbury’s regular season and the CCC tournament which determines individual regional qualifiers, That’s because the Davidson schools will be on a break. Griffith hopes to schedule a few non-conference tests during that quiet period to prepare the Hornets for the playoffs.

“We’re not a great team, but we’re a good team,” Griffith said. “We may struggle some, but we can win dual team matches in the playoffs. We can still send kids to states. All you can do is all you can do. Our guys are competing very well.”