High school football: Salisbury’s Gibson could be special for Indians 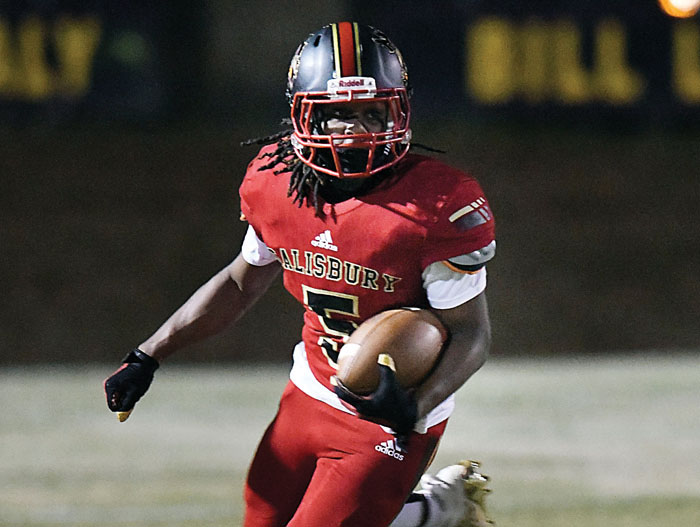 salisbury post file photo Salisbury’s Jayden Gibson runs the ball during a game against West Rowan last season. He will continue his football career next year at Catawba. photo by Wayne Hinshaw, for the Salisbury Post

SALISBURY — Some athletes want to get away from home for college, but some choose to stick close to their roots.

There’s an obvious perk in staying close to home. Family and friends can support you for at least half your games, with minimal travel time and expense.

For Salisbury High’s all-purpose senior football standout Jayden Gibson, home is definitely where his heart is. Catawba College offered everything he was looking for.

“People ask me if it’s a negative to go to college in my hometown, but the way I look at it I’ll be living on a nice college campus and meeting new people from everywhere,” Gibson said. “I’m going to have teammates on the football team from Florida, Georgia, from all over the Carolinas. I’m going to be seeing what the world is like outside Salisbury. I’m just going to be doing it a mile from home.”

Gibson isn’t one of those athletes who had to send out hopeful e-mails trying to get coaches to come watch him play or to check out his film.

The most important coach in Gibson’s future is Catawba head coach Curtis Walker, who has known Gibson forever. Every Friday when Walker went to watch his sons Jalon and Deuce play for Salisbury, he also got to see Gibson up close.

So he knows all about Gibson, knows what he can do and what kind of teammate he is.

“I did see Jayden a lot, and he makes plays,” Walker said. “He can help Catawba in a number of ways.”

Gibson’s brother, Eric, played linebacker for the Catawba Indians, so there’s that connection, as well.

Gibson said Walker contacted him about playing for the Indians shortly after Salisbury’s season ended in the third round of the playoffs, and he wasn’t a hard sell. A campus tour convinced him Catawba was where he needed to be.

You’d like for Gibson to be bigger and taller, but even though he stands 5-foot-9 and weighs about 165, he’s strong for his size and is well put together.

Gibson is one of the county’s fastest athletes and has stayed busy this spring, mostly as a sprinter for the Hornets’ track and field team, but also has a baserunner for Salisbury’s baseball squad.

His wheels could make an impact at Catawba, as they did for the Hornets (11-1). He shined as a receiver, defensive back and kick returner for Salisbury.

The twin brother of Jaleiah Gibson, who was a starting forward on Salisbury’s state champion basketball team, he helped Salisbury win a football state title as a junior.

As a senior, he had an even bigger season. It began with a touchdown catch opening night against Polk County.

He had pick-sixes against East Rowan and Lexington, and his interception return against Bunker Hill in the playoffs set up a touchdown.

In other words, he was a big play waiting to happen, and it might happen on offense, defense or special teams.

“I was hoping to get a rushing touchdown, too,” Gibson said with a laugh. “But I came up a little short.”

He usually was third receiving option for Salisbury, but he was a tenacious edge blocker and had three receptions for 60 yards in a big game against North Rowan.

A familiar face in the defensive backfield for quite a while, he gained experience at both safety and cornerback for the Hornets.

He could tackle as well as cover. He made five stops on running plays against Thomasville, one of the best teams Salisbury faced in the 2021 season.

“I’m not sure if I’ll end up on offense or defense, but my earliest opportunities to help Catawba probably will be on special teams,” Gibson said. “I’ve always enjoyed being able to help my team in multiple ways.”

“I think he’s an athlete who eventually can help Catawba on defense or on offense, because he’s really good with the ball in his hands,” Hinson said. “As far as special teams, I’ve coached at that level, and he can help Catawba there right away.”