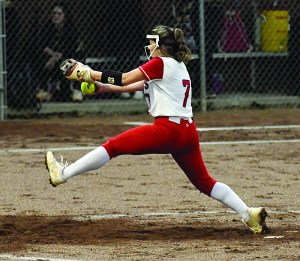 Ritchie retired 21 straight Wildcats and struck out nine. South Davidson came into the game  with a 6-0 record.

The Cougars (4-6) got three hits, including a triple, from Lonna Addison. Holly Stowe went 3-for-3 with two RBIs. Landry Stewart and Abbey Nixon had two hits each.

Allie Brown scored directly on a corner kick for the game-winner.

“We developed a couple of bad habits early on this season and we paid for them tonight,” SHS coach Matt Parrish said. “West Davidson had a great game plan and executed it to perfection. They deserved to win.”

Salisbury has no time to rest. The match originally scheduled for Thursday at Thomasville has been moved up to tonight to avoid late-week rain.

Salisbury then takes on South Davidson Wednesday night at home at 6 p.m.

Kevin Williams was named player of the match.

The  Jonathan Thacker  Foundation Game  (A.L. Brown vs. Concord) is set for Thursday at Atrium Health Ballpark on March 31 at 6:30 p.m.

Medalist Will Webb shot 34. Other scorers for SHS were Warren Fesperman (39), Nick Antosek (43) and Bo Brincefield (43).

The CCC teams will compete at Lexington Golf Club on Monday.

Lake Norman Charter’s Will Dalton was medalist with a 34.

SPC team will compete at River Run next.

Freshman Kary Hales (Carson) was a bright spot for the Indians with a 5-for-7 effort and four RBIs.

Lenoir-Rhyne visits Catawba at 3 p.m. on Wednesday for two games.

Livingstone’s Navar Elmore was named a second-team All-America for HBCU schools by Boxtorow.

The Bulldgs were led by Luke Ponczka with two homers and JR Taylor with one.

Cam Kluttz picked up the win.

West will play at Erwin on Thursday.

Overcash and Cooper Welch had two RBIs each.

The Catawba Chiefs Cub is up to  713 members, including 269 new members this year.

The McCanless Couples played a Captain’s Choice event on Sunday.

Clement had the longest putt.