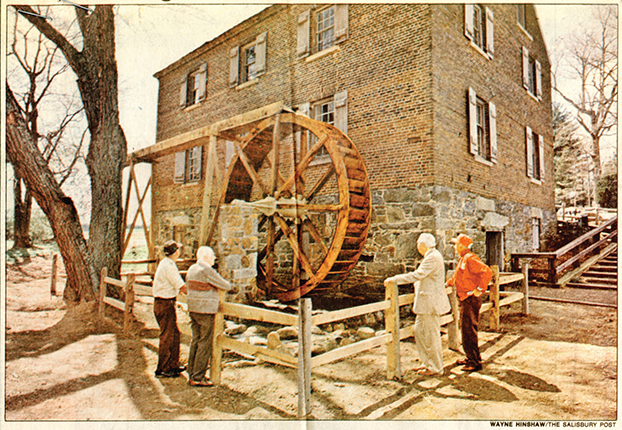 Men observe the water wheel at Kerr Mill just after it was installed in 1989. The replica wheel was constructed by Keith Yount and mimicked the original water wheel that propeled the mill in its early days. The replica wheel has been damaged by time and weather over the years and a project to replace it is underway. Salisbury Post file photo.

Constructed by Joseph Kerr around 1823, Kerr Mill was for years the primary source of flour, cornmeal and feed for Kerr’s western Rowan County plantation and its surrounding neighbors.

The grist mill, located next to Kerr Creek in what is now Sloan Park, is a two-story, gable-roof brick building with a water wheel in the rear. The mill is one of several that gave name to Mill Bridge, which was by some accounts the first settlement in Rowan County. The mill was operated by the Kerr family for several decades after its construction, but was sold to James Samuel McCubbins in 1872. McCubbins and his partner, John Harrison, transitioned the mill into a steam engine-powered roller mill in the late 1880s.

The mill changed hands several more times and was eventually purchased by James W. Sloan in 1908. He sold it to his nephew, James Andrew Sloan, in 1927. James A. Sloan and his wife Carrie gifted the mill and surrounding property to Rowan County in 1973. Kerr Mill was listed on the National Register of Historic Places in 1976 and is now the centerpiece of Sloan Park, which opened to the public in 1983. The mill has long been out of operation, but was a working mill for more than 100 years.

The original water wheel used at the mill was lost and has not been recovered. But in 1989, Keith Yount built a replica wheel for the park at his Sherrill’s Ford Road construction company. When the new wheel was placed on Kerr Mill, it was so well balanced that the wind turned it for about 30 minutes, according to a Salisbury Post article published at the time. Time and weather took a toll on the wheel over the years, causing the wooden blades to break and fall apart. Parks and Recreation Director Don Bringle said Sloan Park visitors have often inquired about the wheel over the years, advocating for its repair or replacement.

A restoration effort was mounted in 2018, but no real progress was made. The county renewed plans to revitalize the wheel last year. The project was awarded to C&R Millwork, a company based in Gold Hill. The restoration of the wheel will be more of a rebuild, since the interior metal hub is likely the only salvageable piece. Bringle said the wooden part of the wheel will have to be rebuilt entirely, likely with a more durable, water and weather resistant lumber such as cypress.

C&R plans to begin work in late spring. The project will cost Rowan County about $40,500. Having a functioning water wheel will be worth the price, Bringle said.

“It will basically bring character back to what Kerr Mill is all about,” Bringle said. 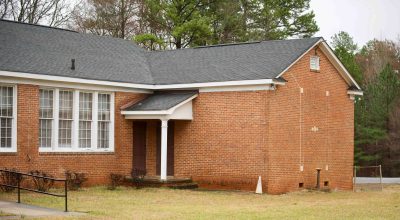