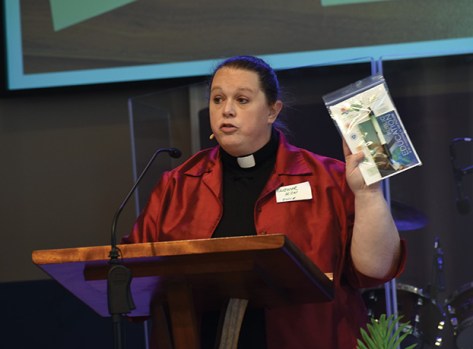 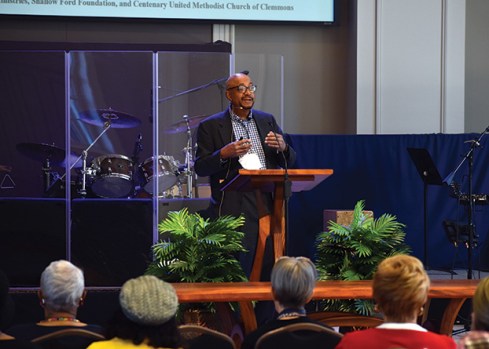 SALISBURY — There was plenty of speaking and listening at the Covenant Community Connection’s “Supporting Public Education” forum on Saturday afternoon, but the event focused on taking action.

The Covenant Community Connection, a faith-focused subcommittee of the Salisbury Human Relations Council, hosted the forum at First Presbyterian Church. More than 40 people gathered to hear two speakers share different ways community members can take steps to improve public education both locally and across the state.

“The hope and intention of this forum is to plant the seeds of how both charity and advocacy can be nurtured in congregations and in community to meet the growing needs of our community and of our youth,” said Susan Lee, chair of the Covenant Community Connection.

Rev. Suzanne Miller, founder of Pastors for North Carolina Children, illuminated ways people in Rowan County can get involved in the organization’s letter writing campaign to encourage state legislators to distribute funding for schools in accordance with the Leandro Plan.

Rev. Vincent Howell from Hood Theological Seminary shared insight and lessons about how an interfaith organization he founded and leads in Clemmons supports public schools through collaboration.

Miller, who started Pastors for North Carolina Children in 2018, said North Carolina’s public schools are “dramatically” underfunded. She wants people to join her organization’s quest to change that.

From 2005-06 to 2020-21, funding for public schools increased from $6.86 billion to $9.88 billion. Those numbers can be misleading, Miller said, because funding has actually decreased 6% since 2008-09 when staff benefits, salaries and enrollment increases are taken into account.

While funding has decreased, Miller said unmet school construction costs have risen by $5 billion to $12.8 billion since 2015.

“We know that’s not even reflective of the true need because some districts have stopped reporting some of the need because they know it will never be met,” Miller said. “That is a travesty. That is morally wrong that we are not providing what our children need to learn.”

To provide the state’s public schools with the money they need, Miller said her organization is advocating for legislators to implement the Leandro Plan and disburse the funding. The Leandro Plan is an eight-year schedule of funding and policies resulting from the Leandro v. State of North Carolina court case.

In 1994, a consortium of plaintiffs made up of families and five poor school districts filed a lawsuit that alleged the state didn’t provide adequate levels of funding for the districts to provide a sound, basic education for all students.

Although the North Carolina Supreme Court has twice ruled in favor of the plaintiffs, that hasn’t translated into additional funding as legislators have pushed back on the idea the courts can order the state to turn over funding for budget items.

In November, Judge David Lee ordered the state to hand over $1.7 billion in funding as a starting point to fulfill the recommendations of the eight year plan, but the court of appeals blocked the order. The court of appeals agreed the money was needed but denied that Lee has the power to force the state to make appropriations in its budget.

The state Supreme Court decided last week that it will hear the case yet again. Also, Chief Justice Paul Newby replaced Lee, a Democrat, with Michael Robinson, a Republican, who will now be the trial judge overseeing the case. Robinson will determine whether to amend Lee’s order based on the state’s budget.

While the Leandro case continues to play out, Pastors for North Carolina Children has launched a letter writing campaign called Mission Amplify that encourages people to contact their state legislators and voice their support for distributing funds in line with the Leandro plan.

“Every time it’s been into the courts, it’s won,” Miller said. “But we need the legislature to do what is necessary by our children.”

Miller said her organization is working to build Mission Amplify “teams” across the state to send postcards to each of the state’s 120 representatives and 50 senators. Miller said people can join the effort by visiting pastorsforncchildren.org or following the organization’s Facebook page. Pastors for North Carolina Children will be hosting several training dates in the coming months.

Miller passed out postcard writing packets at the event.

Not long after moving to Clemmons five years ago, Howell met with the community’s education leaders to identify ways the church he was pastoring at the time, Centenary United Methodist Church, could better support public education.

The result was the creation of the Interfaith Alliance of Clemmons & Lewisville, an organization dedicated to “working together with local schools for student success.”

Howell, now the director of the Congregational Faith & Learning Center at Hood Theological Seminary, shared ways the organization has been able to carry out that motto over the past several years.

The Interfaith Alliance started by identifying basic needs in the school system, including clothing, food, mentoring and guidance to graduates planning life after high school.

Howell said the trick was to join forces with other faith-based organizations, companies and educational institutions to tackle projects collaboratively. The Interfaith Alliance meets with those stakeholders on a monthly basis, Howell said.

“There is value in collaboration between churches, the faith community, schools and the broader community that will impact future generations,” Howell said. “We cannot overlook the importance of the intersection of the faith community and how we impact the lives of our young people.”

Howell said the models used by the Interfaith Alliance could translate to other communities, including Rowan County.

Lee said the Covenant Community Connection will meet again soon to talk over the information provided by Miller and Howell and determine steps forward.

Shonda Hairston with Rowan-Salisbury Schools called on people to use the information.

“What can we do? What action can be behind those thoughts and those feelings?” said Hairston, executive director of elementary schools for RSS. “We just thank you for coming. We look forward to continued communication and discussions, but more importantly action.”