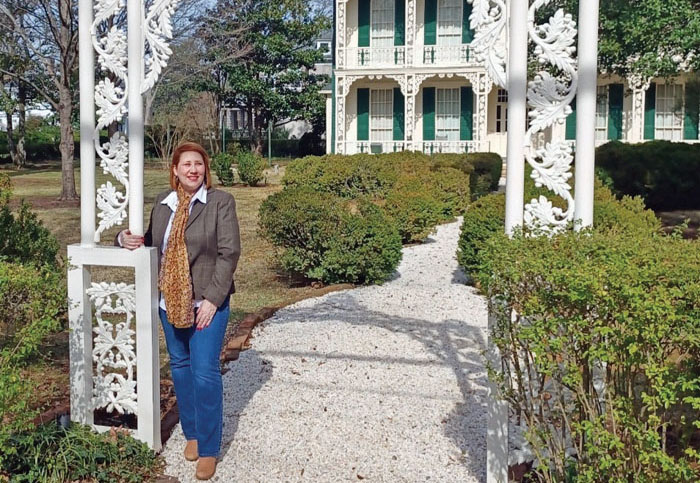 Submitted — Kimberly Stieg, who's from Oklahoma City, started as the new executive director of the Historic Salisbury Foundation in January. She comes at a time when the historic Dr. Josephus Hall House is celebrating its 200th anniversary and the foundation celebrates its 50th birthday.

SALISBURY — Kimberly Stieg and her husband, Scott, drove 1,100 miles over the Christmas holiday from Oklahoma to visit Salisbury, a historic town they knew nothing about.

Stieg had only discovered a few years earlier that she enjoyed restoring historic homes and “bringing them back to life.” And without knowing it, the couple’s work of renovating historic homes and owning one of their own was preparing Stieg for a role she’d eventually accept in Salisbury. After just a few hours in town, Stieg said she quickly learned there was something special about this place.

“The one thing we took away was people love this town. And it was special. I could tell right away this is a special place,” Stieg said. “And we want to be in the middle of everything.”

She then accepted an offer to the lead the city’s nonprofit Historic Salisbury Foundation.

Stieg was hired in January to serve as the foundation’s 11th executive director. Founded in 1972, the Historic Salisbury Foundation’s mission is to preserve, protect and revitalize the city’s historic fabric. It does so by consulting with property owners in historic districts, hosting educational events and fundraisers, hosting the annual OctoberTour and honoring preservationists. Additionally, it has saved more than 100 historic buildings through an active revolving fund program, which enables the foundation to save and stabilize a property and sell it with protective covenants.

Stieg said she and her husband were active in the historic preservation community in Oklahoma City. Before taking the new job, Stieg sold an art and vintage retail business she founded along with her historic home. Within days, they signed a contract for a second-floor condo on Main Street.

Stieg has a background in nonprofit management, fundraising, membership development, personnel and volunteer management, budgeting, grant writing and event management. While having a servant’s heart for this kind of work is important, so is a mind for business, she said. Since her first day, she’s worked to identify key stakeholders in the community who can support the foundation’s efforts and help strengthen collaboration with other organizations.

“Before anything else, that relationship has got to be there,” Stieg said. “And so it’s not just a membership number game for me. I want to develop a relationship with this person and help them understand why it’s important to be a member.”

Among her goals is to increase awareness for the foundation, its mission and what it can offer residents. The historic property that sparked the establishment of the foundation is the 1820 Dr. Josephus Hall House, located at 226 S. Jackson St. In the 1970s, designs were underway to transform the historic home into a nursing home. Around the same time, the Bell Tower was in jeopardy of being demolished after the 1892 First Presbyterian Church was razed.

It was the long-term vision of Edward Clement that prevented those demolitions, especially at a time when so many places were getting rid of old, historic structures to build new, Stieg said. Today, both of those landmarks stand as two of the foundation’s most iconic properties.

“Can you imagine if that Bell Tower was not there,” Stieg said. “The vision that it took for Mr. Clement all those years ago to say, ‘No, these are important.’ So it’s amazing to me. And I don’t think people realize these things don’t just happen. It’s a lot of effort.”

Stieg comes at a time with lots on the horizon for HSF. The Hall House’s 200th anniversary was in 2020, but the foundation will hold a celebration this year. Additionally, with the foundation celebrating its 50th anniversary this year, it will launch a Preservation Guild where older members of the original board can “pass the brick” to younger residents who want to carry on the foundation’s mission.

“We are counting on future generations to pick up where they left off,” Stieg said. “It’s a chance for some of our older members to really put some thought into how we’re going to invest in these people. Kind of recreating what we currently have but keep it going.”

The guild will include a sponsorship, with funds set aside in the revolving fund to continue the foundation’s work of identifying properties and working to save them. Then, those properties can be sold to owners or developers who will preserve the integrity and restore it.

The foundation owns the Ice House, an architectural salvage warehouse. That resource is available to Salisbury residents. But rather than opening it each Saturday, Stieg said the foundation will launch in April a monthly “Second Saturday Salvage,” with vendors on-site. Such an initiative is another way to help increase the foundation’s visibility and engagement.

The foundation is currently salvaging non-original items from the historic Empire Hotel, like pieces of the apartments installed in the 1940s to house military members when they came home from war.

Stieg said historic preservation is important for several reasons, including sustainability, increased property values and a positive economic impact. This community has an identity rich with culture, history and heritage, she added.

She recited a quote from conservationist John Sawhill: “In the end, our society will be defined not only be what we create but by what we refuse to destroy.”