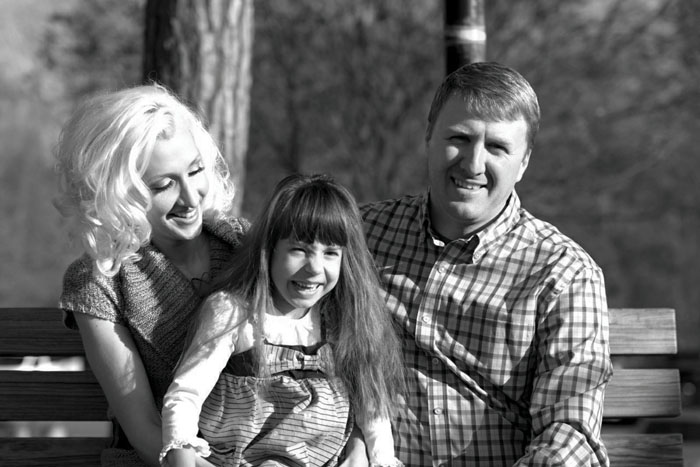 Submitted photo Stephanie, Leira and Kevin Reed. The Reeds adopted Leira from Ukraine. Kevin is the brother of the Rev. Ken Reed of Salisbury.

The Russian invasion of Ukraine provides yet another example of how small our world really is. The Post recently talked with Jennifer Raper, whose family has hosted a Ukrainian girl during summers and holidays for the past three years.

Other area residents with connections to Ukraine include:

John Soileau and his wife, Tommie, served in the Peace Corps in Ukraine from 1995 to 1997.

“There is no real age limit on the Peace Corps,” Soileau says. “That was appealing to us.”

Soileau took early retirement as an engineer. His wife, who died seven years ago, was a teacher.

The couple was prepared to go to Ghana, but Tommie Soileau ended up being allergic to the malaria medication.

“That evening,” Soileau says, “we got another call: Would you be interested in Ukraine?”

Both taught English classes there. Tommie Soileau was in a classroom, while her husband taught in a different high school each evening. They lived in an apartment in the city of Berdichez.

“All the students were volunteers, and I was left to my own devices,” he recalls. “I drew kids from all over town. They were absolutely wonderful. The students were anxious to learn. We made a lot of good friends.”

Soileau walked two miles each day to teach, and students would walk home with him.

“People were extremely friendly,” he says. “We were the only Americans in town. I never mastered the language by a long shot, but they were very patient with me.”

Soileau expresses disappointment about the invasion.

“They’ve been going through hell for a long time,” he says. “I personally am heartbroken right now. I don’t know how else to say it.”

Soileau has retired to Aldersgate in Charlotte. He and his wife had three children. His middle child is the Rev. Sara Ilderton, an assistant to Bishop Tim Smith, based at the N.C. Synod Headquarters in Salisbury.

On July 4, 2008, Kevin and Stephanie Reed of Charlotte had a special kind of independence day. That was the day they adopted their daughter, Leira, from Ukraine. When their flight home took off from Frankfurt, they felt she was truly theirs.

Kevin Reed is the brother of the Rev. Ken Reed, pastor of Concordia Lutheran Church in China Grove.

Leira, now 16, recently gave a presentation about her home country to classmates at Myers Park High School. She wore a Ukranian soccer jersey.

In order to adopt Leira, the Reeds flew to Kyiv, then spent 30 days at Orphanage no. 3 in Odessa, where they could see Leira twice a day.

Once they returned to the States, Leira was diagnosed with cerebral palsy at age 3. She is also deaf. She wears hearing aids and is doing well, her uncle says.

“She knows her heritage and her birth story very well,” Reed says. “To see on television the buildings and places in Ukraine has made us appreciate her a lot more — if that’s even possible.”

Three years ago, Frank Merrell of Salisbury was project manager for the NALC Carolinas fall conference. While there, he met Pastor Alex Gross of Ukraine and Pastor Siimon Haamer of Estonia, who were a part of the conference. The NALC has a relationship with Spiritual Orphans Network (SON), an Eastern European mission network in Estonia, Latvia, Russia, the Czech Republic, Slovakia, Romania, and Ukraine.

About 20 years ago, the Ukrainian church lost all of its properties to a corrupt bishop, Merrell says. They’re all part of the German Lutheran Church (DELKU), and the church was able to help restore those properties.

“Pastor Gross has endured some rough stuff,” Merrell says. “His church in Odessa has been feeding 25 families a week.”

Gross and his wife recently sent their daughters, 17 and 19, to be with other families in the SON program in Romania, well away from the fighting.

Tom and Martha Smith of Salisbury have traveled extensively since Smith retired as CEO of Food Lion in 1999. They took a river cruise to Ukraine in 2018.

“When we’d stop at various places, we’d roam through town and talk to people,” Smith recalls. “They were very friendly people, not a great deal of difference from people in North Carolina. It’s sad. The whole thing is totally sad. It shows what a mess we have in this world.”

“It’s always interesting to see the people,” says Martha Smith, who notes that this particular cruise went from Kviv to Odessa. “The people we met were friendly and nice, but had that Eastern European demeanor about them. They were happy to have people traveling in their country.”