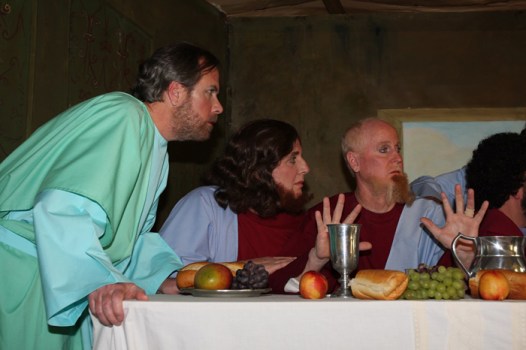 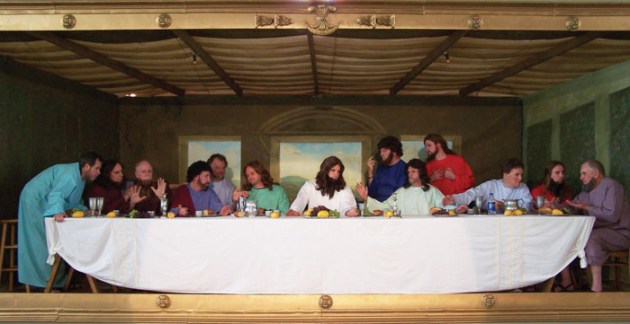 The Last Supper is seen from an earlier portrayal at First Presbyterian in Kannapolis. File photo

KANNAPOLIS — First Presbyterian Church of Kannapolis will put on a presentation of “The Last Supper”  on Palm Sunday.

The church began in 1961 what has become a beloved community tradition — the drama by Ernest K. Emurian based on Leonardo da Vinci’s famous painting. The sanctuary altar is transformed into a life-size “upper room,” as congregants portray Jesus and his 12 disciples during their last Passover together. Jesus has just announced that one of them will betray him.

In turn, the disciples “come alive” and ask in their own hearts and minds, “Is it I, Lord?”

The drama is a moving reminder of Jesus’ sacrifice and has become a labor of love for the congregation. This year will mark the church’s 20th
presentation.

The dress rehearsal is Saturday, April 9, and the presentation, which is open to the public, will be April 10, at 7:30 p.m.

The drama was presented annually for the first four years, 1961 until 1964. It was revived in 1969, which was the last year before moving to the current church building and in 1977, for the first presentation in the new sanctuary. Thereafter, it was portrayed every three years until  2004. The 16th presentation during the church’s Centennial year was held in 2009. Every three years since, it has been held on Palm Sunday. The COVID-19 pandemic delayed the 20th presentation, scheduled for 2021, until this year.

During the years of sharing this living tableau with the community, Dot Williams had a vital role as a coordinator or assistant in the first 15 presentations. Lela Bishop used her artistic talents in 13 performances. Bill Bradley portrayed Jesus 13 times, and Jack Goodnight played a disciple 12 times, the longest of any other man. The Centennial presentation was the 10th time that Jane Jacobs, Bob Hallman and Lee Efird participated.

The purpose of this living dramatization, from its beginning in 1961, was to be a time of worship, portraying the message and significance of this emotional day in the life of our Lord that was a gift to us for our salvation.