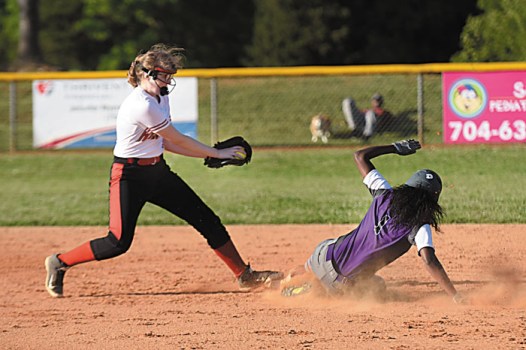 File photo by Wayne Hinshaw/for the Salisbury Post ...Salisbury shortstop Mallory Link steps on second base for an out. 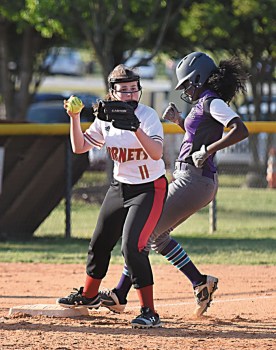 Salisbury's Ella Trainor makes a play at third base. File photo by Wayne Hinshaw, for the Salisbury Post

Fifth in a series of softball previews …

“I think we’ve got the best team we’ve had since I’ve been here,” Cozart said. “We’ve got a core group of girls who we’ve had now for four years.”

Trainor and Link have shared second base and third base. Cozart is still searching for the best defensive combination.

Junior first baseman Caroline Cozart, the coach’s daughter, plans to graduate early, so this also is expected to be her last high school season.

“Caroline has been giving us a lot of good at-bats,” the coach said. “She’s only struck out once.”

Cozart’s seven RBIs led the Hornets in the abbreviated 2021 season.

The early schedule has been challenging, including a doubleheader against 4A A.L. Brown, two outings against an 8-1 North Stanly squad and a game with East Rowan.

With only one travel-ball softball player (sophomore Katie Peeler) on the roster, the Hornets haven’t been well equipped to take on that sort of non-conference schedule, and they’ve taken a string of lopsided losses. The Hornets totaled only six runs in their first five games and allowed double-digit runs in all of them.

“But we’re in a much different kind of conference this year and we’re hoping to start getting some wins in the league,” Cozart said.

Salisbury opened Central Carolina Conference play with a 15-4 loss to South Davidson, but the CCC is a league that no longer includes stout softball schools such as North Davidson, Central Davidson, Ledford and Oak Grove. The Hornets figure to be able to compete on even terms with just about all of their league opponents. At this point, South Davidson is the only team in the CCC with a winning overall record.

The biggest graduation loss from 2021 for the Hornets was Ellen Yang. She was the leading hitter, handled the pitching and was Salisbury’s only all-conference player.

Peeler would be an excellent outfielder, but she has to pitch out of necessity for the Hornets. She’s getting a decent number of strikeouts and is working on cutting down the walks, wild pitches and HBPs.

Peeler has been really good on offense as the leadoff hitter. She’s batting .429 in the early going and has used her speed to take extra bases and score runs.

The second pitching option for Salisbury is Ashley Yang. She’s a freshman who usually handles shortstop duties. Volleyball is her main sport, but she’s one of the Hornets’ better softball players.

Rachel McCullough, a senior, missed the Hornets’ early games with basketball activities, but she returned to the softball team on Tuesday. She gives the Hornets an experienced catcher and she can hit. She had a triple in her first game. McCullough was a productive offensive player (.296 batting average, .457 on-base percentage) as a junior against tougher pitching than the Hornets will usually see this season.

The rest of Cozart’s squad doesn’t have much softball experience, but the Hornets have some good athletes.

Freshman outfielder Dashia Canada, a track girl, has a lot of speed.

Freshman Xaniyah Price did a good job catching before McCullough’s arrival and she’ll get some time in the outfield.

“We’ve got some kids with athletic ability,” Cozart said. “We’re trying to teach the basics.”