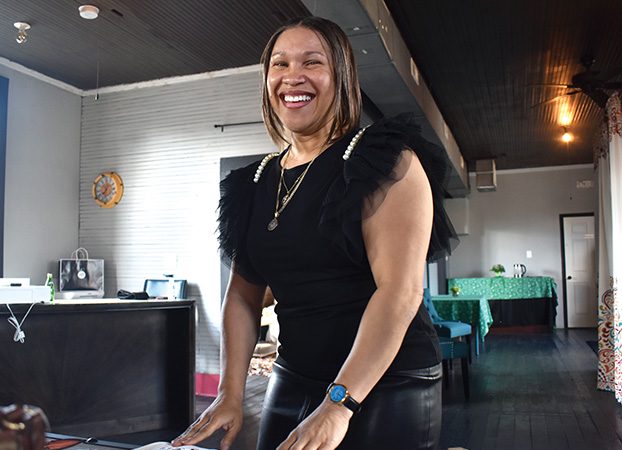 Katrina Jarrett has achieved her goals on the track, in academics and has now trained her sights on finding success in the retail world. Ben Stansell/Salisbury Post

SALISBURY — Just a few weeks before her boutique’s grand opening, Katrina Jarrett was in desperate need of a dressing room.

Unsatisfied with the pricey quote given to her by a contractor for the job, Jarrett took matters into her own hands. She bought lumber from Lowe’s, purchased a woodworking manual and set her sights on the job.

“I sat here and I built my dressing room,” Jarrett said. “It’s unfinished, but I think it’s cute that way.”

The former North Rowan High School track star has always been good at setting goals and achieving them. Jarrett’s objective at Kalo Boutique — her shop above Southern SweeTees Bakery at 1024 S. Fulton St. — is clear.

“My whole goal is to make the females in Salisbury feel pretty,” Jarrett said.

If her track record is any indication, she’ll make it happen.

Jarrett was 14 years old when then North Rowan High School track coach Robert Steele noticed her blazing speed and presented her with a road map to a college scholarship.

“(Steele) said, ‘If you do exactly what I tell you to do and keep your grades up, you can go to school for free,’” Jarrett said.

Despite graduating from North Rowan in 1993, Jarrett said she still holds the school record for the 100-meter dash and is tied for the record in the 200-meter dash. Even after not finishing her junior year while she was pregnant with her son, Christopher, Jarrett won a state title as a senior.

Steele was right. Jarrett earned a scholarship to run at Seton Hall University, a private college in South Orange, New Jersey. At Seton Hall, she continued to make history by being the first freshman in the school’s history to qualify for indoor nationals in the 60-yard dash.

College is also where Jarrett developed an interest in fashion.

But it was education, not fashion, that Jarrett studied at Seton Hall. After earning her first degree, she returned to North Carolina and taught physical education and health for three years at an elementary school in Butner. Looking to reset her career path, she enrolled at DeVry University to get her masters in business administration from the Keller Graduate School of Management. There, she developed an interest in working in college admissions.

For the past 15 years, that’s what she’s done. Jarrett started off at DeVry’s campus in Philadelphia as a new student coordinator before returning to Rowan County to work as an associate director of admissions at Livingstone College. Jarrett was especially proud of the college’s 2013 enrollment class, which she said was the largest ever.

“I had a ball at Livingstone,” Jarrett said.

Jarrett was hired as director of admissions at Wilberforce University in Ohio, where she worked for a year before leaving the position and returning to Rowan County.

“I wanted to take control of my job stability and that led me here, to opening up my boutique,” Jarrett said.

Wading into the retail world is a new experience for Jarrett, but she’s found plenty of helpful resources on the internet.

Since opening the boutique in November, Jarrett has discovered that many of the skills she learned while working in admissions actually translate well to the business.

“I get to use the customer service aspect that comes from admissions and dealing with people,” Jarrett said.

Jarrett specializes in women’s clothing with an aesthetic built around “ruffles, pearls, tulle and pretty garments.” Kalo Boutique carries Coach brand clothing and purses and several other name-brands as well. Not just for women, there is a corner in Kalo dedicated to men’s clothing. Jarrett gift wraps purchases from her store or anywhere else for those looking to deliver a gift in a special way.

Now with a storefront up and running, Jarrett is focused on building the boutique’s online brand and making more people aware of the shop.

The boutique is open Tuesday through Saturday from noon to 7 p.m. More information about Kalo Boutique can be found at shopkaloboutique.com.