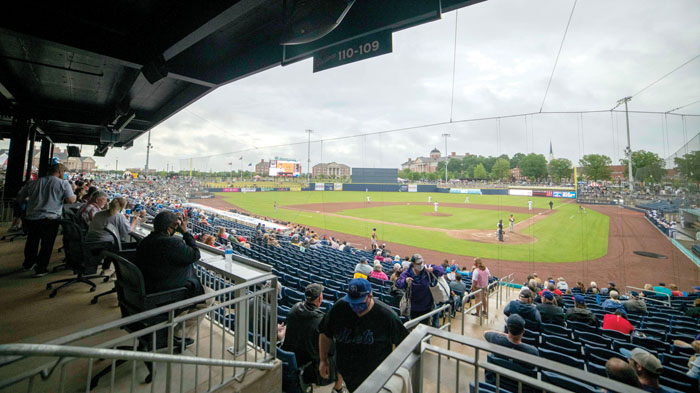 The inaugural game of the Kannapolis Cannon Ballers on May 4, 2021. They played against the Down East Wood Ducks from Kinston. JON C LAKEY/FOR THE SALISBURY POST. 5/4/21, Kannapolis,NC.

KANNAPOLIS — While Matt Millward is proud of what the Cannon Ballers organization accomplished during its inaugural season, he’s even more excited for what the team has in store for year two.

“From year one to year two of a new franchise and a new ballpark is really that time to cement yourself in the community, but also time to implement changes and new ideas,” said Millward, general manager of the Kannapolis Cannon Ballers. “Fans are really going to be impressed with everything we’ve been working on this offseason.”

After a yearlong COVID-19 delay, the Cannon Ballers in 2021 played their first season at Atrium Health Ballpark in downtown Kannapolis. With plenty of changes implemented and a full promotional schedule in place, the team will open its second season against the Fayetteville Woodpeckers on Friday, April 8.

Here’s what fans need to know in advance of opening day.

A flyover, fireworks and speeches made for a momentous opening day for the Cannon Ballers last season, but it wasn’t quite normal.

“Opening day was great, we had all the pomp and circumstance after all our hard work and we saw everything come to fruition, but we didn’t have a packed house because of social distancing,” Millward said.

Despite a month of socially-distanced seating, the Cannon Ballers welcomed 162,000 fans to Atrium Health Ballpark last season. That averaged out to more than 2,700 fans in attendance per game. Millward said he expects to improve on those numbers this season since the team will play an additional six home games for a total of 66 games in Kannapolis. That will make for a full schedule of 132 games, as opposed to last year’s 120.

“Things are starting to slowly return to normal where we’re seeing a big uptick in group tickets that will overall help our attendance.”

The Cannon Ballers have a full slate of promotional events for the 2022 season. Opening night will feature a magnet schedule giveaway and a post-game fireworks show. Dinosaurs will invade the park on May 22 and the team will wear Captain Marvel jerseys on July 29. On July 31, the team will once again be giving away Cannon Ballers-themed Hawaiian shirts. A bobblehead of the team’s organist will be given out on Aug. 25 and a series of pint glasses will be distributed at three games.

Shoring up the snack menu

During a scouting trip last season to see ballpark operations at Camden Yards, home of the Baltimore Orioles, Millward was shocked to see the number of people standing in line for ice cream.

“It was a Saturday afternoon game and the line was ridiculously long,” Millward said.

The soft serve didn’t come in just any bowl. It was served in an upside down souvenir Orioles helmet, which was part of the reason why so many fans were clamoring for the frozen treat. Millward took note and this offseason the Cannon Ballers invested in a soft serve machine of its own. The plan is to sell chocolate, vanilla and potentially other flavors in a Cannon Ballers team helmet. A variety of toppings will be offered.

“We’ve always had hand dipped (ice cream), but it’s not the same as getting soft serve in a Cannon Ballers helmet with sprinkles on top,” Millward said.

Millward said the team is bolstering its concession offerings in other ways to include healthier and more inclusive options such as salads and gluten-free items. Sushi will make its menu debut.

In an effort to be more sustainable, the team will serve food and beverages in compostable cups and containers this season. Composting receptacles will be stationed around the ballpark and Millward said the goal is to improve fan education about composting. Food scraps from the concession stand kitchens will be composted as well.

Soft serve and sushi won’t be the only adjustments at Atrium Health Ballpark. Fans will notice a few tweaks to the on-field product as well.

All teams in minor league baseball will be playing with a few experimental rules, including larger bases and a pitch timer. The first, second and third bases will be increased from 15 square inches to 18 square inches. Although 3 inches might not seem like a big difference, Millward said the shift in size is noticeable.

“You have to see it in person, but when you’re up close to it they’re significantly bigger,” Millward said.

The jumbo bases are intended to reduce player injuries and encourage stolen base attempts.

In an effort to speed up the pace of play, minor league baseball is also putting batters and pitchers on the clock. On-field timers will reduce the number of seconds between play. When runners are on base, pitchers will have extra time but will risk automatic baserunner advancement if a third pick-off attempt or step-off within the same plate appearance is made without recording an out.

“The pitch clock, I think our fans will enjoy it, mainly because it will speed up the game a little bit,” Millward said. “On average, teams that experimented with it last year saw their game times be about 15 minutes less compared to the previous year. I think it’ll be good for the game, not only in terms of action but pace of play and speeding things up.”

The only downside is less time for fans to get their hands on a helmet of soft serve.

The full promotional schedule and more information about the team can be found online at milb.com/kannapolis.